One of the founding principles of Policy Press is about publishing books that make a difference and have impact on our wider society, so we were delighted to discover that author Clem Henricson recently visited the House of Lords to present the findings of her latest book Morality and Public Policy.

A plea for morality to be put into public policy was made by Clem Henricson when she presented her book, Morality and Public Policy, to the Intergenerational Fairness Forum of peers and MPs on Wednesday 9th March.

Evidence was being examined with a view to reducing current unfairness between the generations. Henricson discussed the book’s findings concerning moral divides which she contends are not adequately or fairly dealt with by government.

Making the case for a higher profile for morality to address changes in attitudes between the generations in a more timely and conciliatory manner, Henricson stressed that it should not take so long for legislation to keep up with shifts in approaches to matters such as abortion, homosexuality, cohabitation and assisted dying.

“Why does government hide behind the private member’s bill, judicial rulings, loud protracted campaigns and flouting of the law that are so often the necessary prelude to change?

Why is government dilatory and evasive, instead of embracing the essence of human relations – handling fluctuations and tensions head on?” said Henricson.

The ‘Never again’ syndrome was also raised – the collective anxiety at the policy morality interface induced by the perpetual moralistic incantation of ‘never again’ – with Henricson arguing passionately against the blindness associated with this condition.

Across institutions from finance, caring, criminal justice through to family life and individual relationships, we appear to have difficulty not only in embracing change across the generations but also in acknowledging what stays the same.”

Henricson called for greater awareness of morality and how it plays out across generations and populations – an awareness spanning religion, moral philosophy and scientific understanding of the human condition.

“Such an awareness would facilitate a move away from the current sluggish and haphazard public policy responses to changes in social mores and handwringing denial of habitual behaviour.

I make a plea for an analytical resource, such as a commission, to gauge movements and issues in the moral domain with the remit of supporting informed and responsive government action.”

Chaired by Baroness Greengross its purpose is for the promotion of better understanding of the impact of policy on intergenerational relationships and the way in which policy affects people at different life stages. 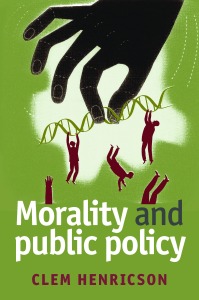 “Clem Henricson eschews the simplistic polarisations that so often characterise the discussion of morality in the public sphere. Her engaging book combines a subtle and balanced analysis with a convincing case that policy makers can and should do morality better.”
Matthew Taylor, Chief Executive, RSA