Survival on a precious planet is threatened. Across countries, democracy and science are derided, authoritarianism is applauded, massive inequalities are taken for granted and human rights are ignored. People of all nations face a choice: continued indifference to cruelties or a vigorous revival of humanitarianism.

For decades, cruelty has been a major but unacknowledged motive in the crafting of countries’ domestic and foreign policies. States and groups which oppose them have used cruelties as a means of control and are highly literate about violence. They ignore the philosophy of non-violence and have been indifferent to the rules of international law.

Cruelties have ranged from torture in South American military dictatorships to amputations and executions in Saudi Arabia, from floggings in Indonesia, the slaughter of Palestinians by Israeli snipers to the wholesale murder of Rohingya people by the Myanmar military. Freedom touting US loves prisons. Australia, Britain and most European states close borders to refugees. Authoritarian dictatorships flourish in China, Russia, Cambodia, the Philippines, Turkey, Iran and most Middle Eastern states. Cruelty is also nourished by economic policies which foster inequalities and punish citizens with few resources.

The consequences are endless, the stories gut wrenching.

In the late 1990s, Joy Gardner a young mother of Jamaican descent was ordered to be deported from her North London home. British police and immigration officials bound, gagged and restrained her with a body belt. She collapsed, fell into a coma and died.

Rajuma, a young Rohingya mother has described how the Myanmar military entered her village and set it on fire. They separated the men and women, summarily executed the men, raped women, snatched her baby from her and threw him into a fire.

Senator Sekai Holland has always been a brave opponent of the Zimbabwean dictator the late Robert Mugabe. Wanting to punish Sekai, Mugabe’s police arrested and tortured her, broke her arm, a leg and smashed several ribs. Her skin was so lacerated as to need skin grafts. She survived only following rescue to Australia and subsequent months of hospital treatment and rehabilitation.

In the Indonesian city of Surabaya, an apparently fundamentalist Islamic family wanted to express their hatred of another religion, in this case Christianity. To kill Christian worshippers and to destroy a church, they equipped their small children as suicide bombers and blew them up. The Australian gunman who murdered over fifty worshippers in Christchurch mosques did the same to Moslem worshippers, albeit with a machine gun.

In these stories of direct violence, individuals’ sadism is a common denominator but a wider context operates. Domestic and foreign policies set the stage for cruelties even if colluding bureaucrats remain faceless and politicians deny that abuses ever occurred. Wars are made based on lies and deceit. Fiscal cruelty is called economy. Cruelty has become an unchallenged law of the modern world.

Yet international law exists and had set the standards for civility and for universal human rights. The European Convention on Human Rights prohibits inhuman or degrading treatment or punishment. The Convention on the Rights of the Child recognizes every child’s right to life and insists that the best interest of all children should be an international priority.

The humanitarian ‘never again’ perspective of those who crafted the Universal Declaration of Human Rights has been derided by Trump, Putin, Xi Jinping, numerous military and religious dictators and by politicians in Britain and Australia who say they champion human rights except when it does not suit them.

If the UN Sustainable Development goal of promoting just, peaceful and inclusive societies is to be taken seriously, the rules of international law need to be re-asserted. That task can be shouldered by any citizen who is literate about human rights, non-violence and a conception of humanity which includes planet earth. Such ‘literacy’ means speaking a language for humanity, as used by poets, artists, musicians and singers of songs of protest.

As a warning against the destructive consequences of the industrial revolution, the English poet William Wordsworth wrote in ‘Humanity’:

What a fair world were ours for verse to paint
If power could live at ease with self-restraint.

Of his Peace Symphony, the Ninth, Beethoven said he wanted this music to be a victory for humanity, inside and outside the concert hall. The libretto in the last movement of that symphony came from the German poet Schiller’s ‘Ode to Joy’ which he wanted to be a kiss for the whole earth.

In the civil rights and anti-Vietnam war protests of the 1960s, Pete Seeger, a folk singer and social activist sang that he had ‘a hammer of justice, the bell of freedom, the song of love between my brothers and my sisters, all over this land.’

The visionary historian, the late Howard Zinn, wondered how US foreign policies would look if national boundaries were wiped out, at least in people’s minds, and if all the world’s children were considered our own. If that happened, violence should cease, wars would not be waged anywhere because wars would be against our children.

By speaking such language, respect for a common humanity can be promoted in any context, country or culture. In the same breath, cruelty could be identified, disparaged and outlawed. This language for humanity should be interesting, reassuring and even inspiring. It poses questions, represents a challenge and offers hope.

Non-violent expressions of power in music and poetry such as these are a sure antidote to abuses of human rights and provide a perspective that is the very opposite of top down, militaristic ways of thinking and behaving. By speaking this language ourselves we challenge those responsible for upholding international law and protecting human rights in the hope that they start to speak the same. 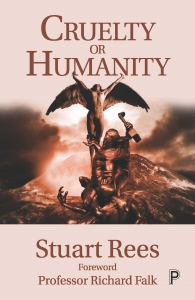 Cruelty or Humanity: Challenges, Opportunities and Responsibilities by Stuart Rees is available on the Policy Press website. Pre-order here for £15.99.