Co-production to address the challenge of urban sustainability

In our complex world, the yearning for simplicity and ‘clear answers’ often results either in boosterist claims of great progress or pessimistic assertions of gloom and doom, yet in reality mostly lies somewhere between such extremes. This applies to many of today’s so-called ‘wicked problems’, including the challenge of achieving urban sustainability, which by nature are complex, multi-faceted and require many stakeholders to collaborate over a long period in order to tackle them effectively.

For that reason, we debated long and hard how best to capture this challenge effectively in the cover image on our new book, Comparative Urban Research from Theory to Practice; Co-production for sustainability (see image above). The choice of Jan Riise’s evocative photo of Cape Town hopefully succeeds in conveying the contrasts between the city’s world-famous natural beauty and endemic biodiversity, material wealth and global tourist hub infrastructure on the one hand, and the poverty and dereliction of South Africa’s apartheid legacy, economic restructuring and political protest on the other.

The City of Cape Town has many progressive and proactive policies for tackling climate change and promoting disaster risk reduction and resilience, but resources are limited, the needs gap is increasing and much more remains to be done. Some private firms and civil society are also active. However, far too many people, especially among the urban poor, are forced to rely on their own initiative and resources, symbolised in the photo by the colourful ‘informal’ fruit and vegetable vendor’s stall in the lower right-hand corner.

In 2015-16, member states of the UN adopted several key agreements, conventions and agendas that collectively comprised the global sustainable development agenda for the next 10-15 years. These strategies all explicitly identify and prioritise the essential roles of ‘subnational entities’ – particularly regional and local government institutions – in achieving the goals and targets. Indeed, historically in the UN context, one of the Sustainable Development Goals (SDG 11) and the entire New Urban Agenda (NUA) have a specifically urban focus.

Precisely because of the ‘wickedness’ of the urban sustainability challenge in all cities and towns, conventional methods and techniques often prove inadequate for building the multi-stakeholder initiatives and long-lasting collaborations required. Key problems include longstanding legacies of distrust, oppositional politics; asymmetrical power relations, institutional structures, barriers and rivalries; short electoral, planning and budget cycles; and capacity and resource constraints.

In practice, therefore, silo mentalities and operations, and personal or institutional self-interest, persist. Conventional forms of public consultation and participation also remain too limited, constrained or superficial to get and keep people on board, let alone to build a sense of shared ‘ownership’ of difficult choices required for the substantial changes to lifestyles and livelihoods that are needed.

Accordingly, interest in and demand for new approaches that overcome these limitations has been growing rapidly. Many variants exist but they fall mostly into what is variously called co-design, co-creation and co-production. These are best characterised as ‘deep’ forms of active participation, that bring different stakeholders, including various components of civil society, together to engage and build greater mutual understanding. Ideally, such transdisciplinary approaches can bridge some of the conventional divides within and between different stakeholders and demonstrate that what the respective groups have in common – in this case a need and desire for urban sustainability – is greater and more important than that which keeps them apart.

Co-production has been widely used between local authorities and their residents in order to improve and make public service provision more appropriate. These approaches have also found increasing traction within research, including transdisciplinary research where a team comprises members from different stakeholder groups or sectors of economy and society.

A unique initiative to experiment with these approaches was launched in Gothenburg, Sweden’s second city and industrial heartland, which has a long tradition of consensus-based social-democratic urban politics. A transdisciplinary consortium comprising the city’s two universities, the city council, association of local authorities in the Gothenburg Region, the Region of Western Sweden, the County Administrative Board, and Swedish Environmental Research Institute (IVL) won competitive co-funding from Mistra (the Swedish Foundation for Strategic Environmental Research) and the Swedish International Development Cooperation Agency (Sida) for a 10-year programme (2010–19).

Known as Mistra Urban Futures, it evolved into a leading international research centre on urban sustainability and, uniquely, operated through transdisciplinary platforms in several cities around the world, each established by formal agreements among the participating institutions, and focused on developing co-production methods. During its final phase, 2016–19, a key innovation became comparative intercity research using these methods in a series of projects in different sectors or thematic areas.

Unlike natural science laboratory experiments, with their emphasis on rigid procedures to ensure the replicability of results, our focus was on the research processes as much as the outcomes or ‘deliverables’. Within each theme or sector, the actual focus of research was determined locally in line with the priorities of the participating platform partners. Sceptics kept querying how we could possibly compare apples with pears. However, this was simply not the point. We were exploring how similarly or differently the respective participating city teams worked collaboratively, both internally and comparatively across cities, within the broad ethos, comparative framework and agreed procedures of the centre.

Called Realising Just Cities to emphasise the centrality of justice and equitability to our notion of urban sustainability, the comparative framework guided experimentation in relation to themes including food supply and security, solid waste management, transport, (cue also the cover photo explained above), migration and mobility, cultural heritage, the knowledge exchange, participatory cities and how the seven cities are engaging with and implementing the SDGs and NUA.

Outcomes are varied but the potential of the diverse reflective and reflexive methods deployed was promising and they facilitated progress towards urban sustainability. Five common enabling criteria we could discern are having appropriately matching project narratives and priorities; adequate time for the co-productive processes, which often take longer than conventional research; sufficient funding to sustain the initiatives; careful attention to cultures of decision-making and power hierarchies; and appropriate governance arrangements and processes. Written in accessible and engaging style by inter- and transdisciplinary author teams from the respective cities, we hope that the book stimulates others to take up the challenge.

David Simon is Professor of Development Geography at Royal Holloway, University of London, UK, and former Director of Mistra Urban Futures, Sweden (2014-2019).  He tweets at @UrbanDavidSimon. 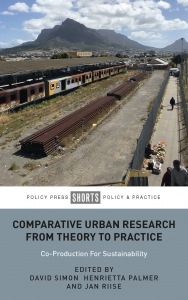 Comparative Urban Research From Theory To Practice: Co-Production For Sustainability Edited by David Simon, Henrietta Palmer and Jan Riise is available on the Policy Press website. Order here for £10.39.