The people and the pandemic

Watch Jo talking about her new book, The People in Question, here and read the introduction to the book, for free, here.

Instead it is courts and legislatures that often take the lead in defining what citizenship really means in any particular country. Furthermore, states often laud the constitutional importance of citizenship, while at the same time undermining some of its constitutional core, such as the principles of equality and dignity.

In my new book, The People in Question, I stress the importance of taking a broad perspective on the constitutional dimensions of citizenship, which looks beyond national boundaries. In fact, I speculate that one of the greatest tests for the constitutional model of citizenship comes from globalisation. Many of the things which we understand to be part of the bundle of citizenship rights and duties, for example, come from legal sources ‘beyond the state’, such as EU law and international law.

Paradoxically, this test comes alongside a simultaneous challenge to constitutional ideas of citizenship coming from populism as a style of government. Populists manipulate citizenship status and rights in order to support their political objectives through the re-construction of the (national) people. They close down the discursive space around citizenship, often by forcing changes in constitutional texts and ideas, as well as in citizenship practices. They exploit the tensions inherent within the citizenship principle between democracy, equality, and the idea of a bounded community.

As the book is published, however, I am left with another question, – does the argument that the book develops still hold in the time of the coronavirus? What adjustments or supplements might it be useful to make to the description and analysis?

Given that one of the primary consequences of the pandemic is to convert mobility from being a widely desired aspect of the human condition into a reviled vector of infection, does that upend the model on which much of the book has been constructed? I’ve written a short essay on this topic, which I hope that people will read alongside the book. Thinking about the relationship between ‘the people’ and the ‘the pandemic’ is a fruitful way forward.

My view is that struggles in relation to citizenship around the state (and the constitutions of states) and the people are not likely to disappear in either the short or the longer term. It is clear that the pandemic is capable of impacting negatively upon the practice of citizenship rights and status, and not just because the more mobile amongst us are heavily constrained in our activities. In fact, there are hidden mobilities within the COVID-19 panic, such as the return migrations of migrant workers within states (e.g. India) and across national borders (e.g. in parts of Latin America). There are forced mobilities, such as continued practices of expulsion, especially clear in the United States which has exported/deported part of its infected pool to Guatemala. Meanwhile, many of the ‘social’ parts of citizenship acquisition have been disrupted, with delays in naturalisation and birth registration processes in many countries. The burdens of these changes fall, like so much else about the COVID-19 pandemic, unevenly on different groups, often impacting the most vulnerable in our societies to the greatest extent.

Recognising and reversing these sorts of trends seems to be a minimum ask for a post-pandemic citizenship which respects equality and human dignity, as the most plausible core elements of constitutional citizenship. The sorts of steps demanded for the ‘new normal’ should, for example, require measures such as regularisations of informal and undocumented residents, in the interests of their welfare and dignity, and not just for economic reasons.

Yet for now, it is probably too early to identify with precision how the dynamics around the pandemic, and recovery from it, may operate to reconstruct the notion of ‘the people’ and the practices of constitutional citizenship as described and analysed in The People in Question. It is too soon to speculate on the longer-term future of ideas of citizenship ‘beyond the state’, whether that stems from the mobility of people or the drift towards supranational or global regulation of issues such as human rights. But vigilance is demanded. Directly or indirectly so many of the citizenship issues which the pandemic gives rise to actually raise constitutional questions, which go to the heart of how states regulate who are the citizens and what rights (and duties) they have and also touch upon on the task of identifying of who are ‘the people’ (in a constitutionalist sense), both within and beyond states. It should be clear that the three questions with which we started remain highly relevant ‘after corona’.

The People in Question has a subtitle: Citizens and Constitutions in Uncertain Times. That we live in uncertain times which place particular demands upon the relationship between citizenship and constitutions was true at the time of writing, has been true for a very long time, and will be true in the future, as we analyse the impact of the crisis through which we are all living. I think, therefore, that there can be little doubt that The People in Question is indeed a book for the pandemic and post-pandemic times. I hope that you, the readers, will agree. 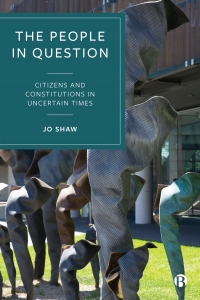 The People in Question by Jo Shaw is available on the Bristol University Press website. Order the hardback here for £60.00, or the EPUB for £15.99.