There is still social mobility, it’s just that most of it is downward

The UK, in the post-war decades, saw a remarkable degree of upward social mobility, with large numbers of people getting higher-status jobs than their parents had at the same age. The decline of social mobility since then has prompted some to say that it has ‘ground to a halt’, which isn’t at all true:  there is still substantial social mobility, it’s just that most of it is downward.

The average family in Middle Britain is now more likely to slide down (in occupational terms) than they are to ‘go up in the world’. There is a similar picture in homeownership: In just 10 years (2006/07 to 2016/17) the proportion of 35- to 44-year-olds in England who were owner occupiers dropped from under three-quarters to just over half. We are now nearing the tipping point at which having your own home in your late thirties and early forties is the exception rather than the rule for families in the middle of the income spectrum.

The End of Aspiration? Social Mobility and our Children’s Fading Prospects, published today, asks why this is happening, and why — despite demonstrable public disquiet about receding opportunities – mainstream politicians’ attempts to harness the anger and aspiration have not succeeded in winning public buy-in.

The book draws on the work of experts and practitioners, but was also written in collaboration with sixteen people who have experienced ‘social mobility’ (a barrister, a politician, a billionaire entrepreneur, a surgeon and others) through each of seven life-stages, to assess what helped them up and what tripped them up. During this process, four recurring themes became apparent:

1. Ambitious aspirations are most likely to be developed and attained in families with secure incomes and housing tenures, safe neighbourhoods and a sense of being respected. But such security and respect are less common, and welfare reforms mean social security is now a less-effective cushion against income shocks. This takes up mental ‘bandwidth’ that could otherwise be used to help our children develop, and undermines our — and our children’s — sense of agency and optimism.

2. ‘Posh friends’ were often pivotal, revealing previously-unimagined career opportunities, being a relatable (i.e. flawed) role-model, and acting as guides to the arcane protocols of life in privileged circles. However, social segregation is increasingly dividing us into separate spaces and separate ‘streams’ in education and career.

3. Many ‘opportunities’ now come with costs that the privileged don’t notice but an increasing proportion of us can’t afford. Often this involves a ‘family paradox’, a creeping assumption that we all have a family that can support us, but don’t have a family who need support (even if we enter new careers in later life as employment markets change).

(Brexit is unlikely to help. Any economic turbulence will dip more adults and children into the financial insecurity that is hostile to the development and pursuit of aspirations; and the UK’s urgent desperation to arrange trade deals will undermine our ability to rebalance our economy towards high-quality jobs).

In addition to exploring the barriers (and opportunities) encountered by individuals, the book also considered the barriers that have stopped our ‘establishment’ from taking effective action, and again identified four themes:

1. The agencies we encounter at each stage of our lives too often pay insufficient regard to the consequences of our experience at previous stages, and provide little preparation for subsequent stages (in some cases, guidance received at an early stage later proves counterproductive). There is no minister with overall responsibility and resources for ensuring the rungs of the ladder are held together by strong side-rails.

2. Poor ‘framing’: There is a frequent, misleading implication that barriers to opportunity are matters that affect ‘the poor’ (e.g. focusing on how many FSM-eligible children get into grammar schools obscures the fact that the vast majority of children from middle-income families don’t get in either). Also, the language of ‘social mobility’ alienates those who point out that there’s no shame in remaining working-class, but could be allies in a programme framed around increasing the numbers of us who have a rewarding career, a home to call our own, and a life determined more by our choices than our background.

3. The ‘Golgafrinchan problem’: Like the Golgafrinchans (Douglas Adam’s nascent civilisation that fails to invent the wheel because they can’t get past an argument about what colour it should be) a left-right struggle around the definition of ‘fairness’ as either ‘individual social mobility’ or ‘collective wellbeing’ has resulted in the delivery of neither, despite the policies that could deliver both being largely the same. Individual aspirations are most likely to be developed and attained in a cohesive society that allows us all security and respect, with minimal tolls on the route to opportunity and in which the state takes an ambitious, strategic and hands-on approach to industrial and housing strategy; collective wellbeing is most likely to be delivered if individuals with personal experience of ordinary life are allowed into powerful or influential positions.

4. ‘Ladders’ are too often designed by people with no experience of climbing them, which largely explains why the previous mistakes are being made. Many of the barriers faced by people from non-privileged backgrounds did not affect more-privileged individuals; and – because the privileged are overrepresented in the personnel and discourse of the ‘establishment’ – those barriers are not addressed. 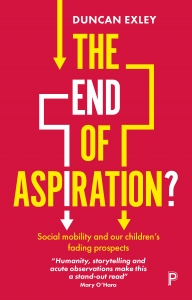 The End of Aspiration?, by Duncan Exley is available on the Policy Press website. Order here for £10.39.