How can we plan for urban futures beyond COVID-19?

As cities across the world plan their recovery from the COVID-19 crisis, it is more important than ever to think beyond the short and medium term to plan and reimagine how people want to live, work and play in our cities in 2040 and beyond.

Despite the circulation of many articles predicting the imminent demise and even the death of cities due to the current pandemic, a contrary view is that many cities have the right ingredients for successful resilience so they can bounce back from the pandemic with renewed vigour. Certainly, cities are expected to be the engine room for the global economy with 65 per cent of the world’s GDP growth expected to come from 600 cities worldwide during the next five years, despite those cities making up only 20 per cent of the world’s population.

While the COVID-19 crisis has been very much an urban phenomenon with impacts on people’s health, wellbeing and lives, there are compelling arguments for believing that economies of scale, face-to-face contact and the continued ‘draw’ of cities will help them prosper beyond the pandemic. At the same time, however, COVID-19 has accelerated trends which were already starting to have an effect pre-pandemic: in many cities the moves towards homeworking and online shopping, for example, will have an impact on the use and make-up of city centre space as the ‘death of distance’ becomes a reinvigorated phenomenon, and in other cities existing income and racial inequalities will continue to widen.

This means some cities will need to rethink how their centres function, with multi-purpose uses combining a range of facilities such as retail, hospitality, residential, education and so on, and with more agile and flexible office space in the centre and suburbs to cater for changing demands. Attracting people back to our town and cities, focusing on ‘shoppertainment’ and ‘cultural draw’ so that the inherent economic ‘ecosystem’ can be renewed and regenerated, will require fresh and innovative thinking on, for example, greening transport systems to improve air quality and tackle climate change, and avoid returning to pre-pandemic ‘business-as-usual’ models of growth. A recent Institute for Finance report suggested that if cities in 21 emerging markets prioritised climate-smart growth in their recovery plans, they could gain as much as $7 trillion in investments and could create 144 million new jobs by 2030.

So, while there is a basic premise that there is still a ‘future’ for our cities, it begs the question of what sort of long-term future that will be, and how we might plan and shape it. Thinking about the future of cities is not new. Visionary thinking has been part of human culture, religion and politics for many thousands of years. Visions are fundamental to thinking about the future and often related to preferred or desirable futures and to a shared sense of change and transformation. Early examples of what might be termed humanistic visionary thinking emerge in the writings of Plato (4th century BC) and Thomas More’s city-based Utopia (16th century). This sense of ‘futurism’ is also seen in the writings of Patrick Geddes and Ebenezer Howard, two of the early visionary planners of the late 19th/early 20th centuries, who developed generic visions of what an ideal city should be.

Building on this, the concept of ‘urban futures’ can be used to develop city visions which are co-created for particular cities. The term ‘urban futures’ means to imagine what cities and urban areas will be like in the long-term (beyond 20 years), how they will operate, what infrastructure and governance systems will underpin and co-ordinate them and how they are best shaped and influenced by their primary stakeholders (civil society, governments, businesses and investors, academia and others). At the heart of urban future thinking is the concept of ‘city foresight’. This is the ‘science of thinking about the future of cities’ and includes a range of futures-based methods and tools to help build and develop a city vision: for example, ‘backcasting’ starts with defining a desirable future and then works backwards to identify policies and programmes and pathways that will connect the present with the specified future.

Urban futures thinking requires city stakeholders to work together to co-create a city vision in a highly participatory way. This means that the four main groups (civil society, local government, business and academia) need to work collaboratively to build and develop city visions. As part of ‘urban futures’ thinking, city visioning is the formal process of creating a ‘city vision’, or a shared and desirable trajectory for a particular city or urban area.

A city vision is not a masterplan, and strictly speaking, it is not what we might call urban planning, although it can certainly link and support that activity. Rather, it should help decision makers and communities think clearly and logically about resolving their problems, and the primary structural matters that include issues to do with equity or growth. Consequently, it cannot and should not avoid looking at the most difficult questions of power, exclusion, wellbeing and the legitimacy to act.

This is not about creating an all-singing-all-dancing single blueprint or strategy, owned by the mayor of a city; the days when single visionaries created total plans for cities are probably long gone. Instead, we must recognise that every city is different, its make-up is different, its place-assets and distinctiveness are all different to other places. That’s what attracts us to want to visit places in the first place. Seeking to shape the future by working with stakeholders provides a real opportunity to create a shared, democratised and inclusive view of how an individual city could be.

Contrary to what some politicians tell us, planning is not just about delivering development as quickly as possible. It concerns itself with the impact of urban change on people and places including the impact of flooding on land and advising not to build in certain locations, the effect of poor air quality on people’s health, the lack of green space in cities that affect people’s wellbeing and mental health.

But planning is also not static and needs to adapt to changing circumstances. COVID-19 has shown us explicitly that we all have a stake in what happens in and to places. Planning reform is needed, but not in the way the UK Government is suggesting. To embrace urban futures, we need to think of urban planning as a series of components, or even as a toolkit, from which techniques are drawn and used, according to the needs of a specific place (its ‘Eigenart’, if you will).

All these traits may seem a world away from what urban planning has become in some countries; for some, they may even seem fanciful, or even utopian. However, they are exactly what urban planning was always meant to address – harnessing open dialogue about possible long-term futures in ways that, in the present, may seem startling. The switch in thinking towards a proactive and progressive form of urban planning, compared with what we currently have, is to dream the art of the possible, unfettered by institutional and professional sclerosis, overcoming narrow sectional interests, and relying on urban planning devices and methods – shaped for the 21st century – that embrace pluralism and urban liveability goals. Dig deeper into the most successful and admired cities across the globe, and this art of the possible is already happening.

Timothy J. Dixon is Professor of Sustainable Futures in the Built Environment at the University of Reading.

Mark Tewdwr-Jones is Professor of Cities and Regions at the Bartlett Centre for Advanced Spatial Analysis at University College London. 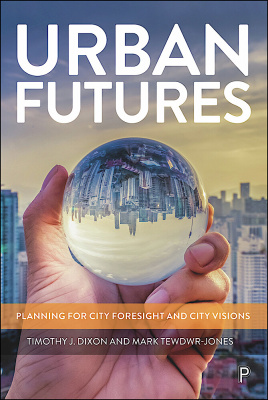 Urban Futures: Planning for City Foresight and City Visions by Timothy J. Dixon and Mark Tewdwr-Jones is available to order on the Policy Press website for £60.00.