Lisa Mckenzie reflects on the impact of her book, Getting By: Estates, Class and Culture in Austerity Britain, since its publication in 2015.

It’s been four years since Getting By was published, I can tell you it is such an exciting moment when you open that box from Policy Press with brand new gleaming covers of books with your name on it arrived. I honestly thought that only my family and close friends would get a copy although I knew most of them wouldn’t read it, and didn’t really think anyone else would pay much attention. I was wrong, really wrong, within the first week of it being on sale I wrote an article in a national newspaper, and went on BBC Four’s Woman’s Hour.

Following the article and the Woman’s Hour interview some crazy things started to happen, I got a lovely email from the comedian Lenny Henry , but also lots of nasty and cruel comments about my appearance, my class, and my intentions. I was unprepared for both. I have learned some harsh lessons in the last four years – being a published author, an academic and having a platform to speak from comes with a great responsibility when you are a working class woman.

Getting By gave me a platform that I could speak from, some notoriety – not all positive – but the context and the intention of the book was always to honour the women who I was raised by, that I lived amongst, and that I cared for out of a collective understanding of struggle .

St Anns over the last four years, as all working class people and communities have suffered under the current government’s austerity measures, the housing situation in the UK since 2015 has become dire with millions of people living in unsafe, and precarious housing situations. The impact of Getting By has been raising the plight of those stigmatised because of their working class position, and the negative stereotypes that has been unfairly targeted upon working class people and the communities where they live.

Writing the book was also about recognising my own voice, and finally accepting that my apparent failures in life, the wasted school years that was spent on the park with my mates piercing each others ears, my 10 years making tights in a factory and my teenage pregnancy, along with my childhood memories and overwhelming fear of being cold, and homeless, were not my failures, or my mother’s, or my grandmother’s. They were – and still are – the outcome of a successful class system that ensures the middle class mediocre get the pleasure and the working class get the pain.

Four years on, and I’m not hopeful for working class people. I am becoming increasingly pessimistic. I learned four years ago through my appearances and articles written for the national media, that the bourgeoisie don’t like their ‘chosen’ representatives of the working class to be too pessimistic, too angry, and too working class. They like them grateful, and they always like a hopeful conclusion.

And so, I chose four years ago that I was not going to be their representative of the working class. I decided instead to honour the women and the families that are still living hand to mouth, that live in fear of homelessness, that are still looked down on, and whose children still have to make the decision whether they will be a ‘good’ and respectable deserving working class person, obedient, studious, and grateful, or whether they will be the working class villain, a teenage mother, a drug dealer, or a drug addict. The context changes, but the choices remain.

As I write this I think about the 14 year old child who was recently stabbed to death in the street in East London, and the choices and the options that must have been withheld from him to get him to the point where died in the street . Four years ago I wrote about this anger, and hopelessness turned inwards, and the symbolic, actual and class violence that happens a hundred times on a daily basis to working class people.

In 2019 I take no pleasure in telling those same stories about the class struggle but I know I have to do it, I’ll continue. They will be uncomfortable, some will not want to hear them, but I will continue, as a working class woman in my own right. 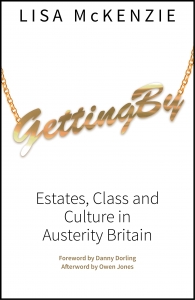 Getting By: Estates, Class and Culture in Austerity Britain by Lisa Mckenzie is available on the Policy Press website. Order here for £12.79.