Connecting evidence to policy and practice: what works now?

How has the role of evidence in policy and practice changed in the last 20 years? Recent events such as Michael Gove’s claim that we have “had enough of experts” and the prevalence of fake news create a sense that decision makers apparently choose not to take academic research into account.

But there is hope. Here Annette Boaz, Huw Davies, Alec Fraser and Sandra Nutley, authors of What Works Now? show that progress is being made. Now is not the time to be disheartened but to build on this progress.

Twenty years ago What Works – a seminal contribution to our understanding of evidence use  – surveyed what we knew about the use of evidence across a range of areas of public policy. This was followed by Using Evidence. We have come a long way in the intervening period and this progress is captured in our new book What Works Now?.

In this new book we, along with invited contributors, have extended our analysis considering how the evidence-use debate has developed beyond the UK, including in the US, Australia, New Zealand, Canada and Scandinavia.

What we see across jurisdictions is a remarkable similarity in the key themes and challenges encountered in promoting the use of evidence (alongside some interesting differences, for example in Australia and New Zealand and Canada where the role of evidence in developing public services for indigenous communities has been challenged).

There is an increased focus on understanding what research is available to policymakers and practitioners and ensuring that research is usable and used.  We draw on Best and Holmes’ conceptualization of the development of our understanding of evidence use (Best and Holmes 2011). They identify three approaches to how evidence is used and shared among policymakers and practitioners:

While dissemination is an important bedrock for evidence use it is rarely enough on its own. The second approach focuses on relationships. This approach acknowledges the importance of connecting with others within research, policy, and practice when producing, using, and sharing evidence. In the UK, the importance of research networks in supporting evidence use has been evident in a number of fields, including social care (with long established networks such as Research in Practice). In the US the National Network for Education Research Practice Partnerships (NNERPP), a network that seeks to connect education agencies and research institutions, is a further example of this relational approach.

The third approach is focused on establishing evidence systems, and is not used as frequently. This approach requires leaders in public service to consider how systems and institutions support the use of evidence. The organizational challenge fund administered by the US William T. Grant Foundation, a foundation dedicating time and resources to studying the use of research-evidence in policy, is an example of systemic support of evidence use. As is the Quality Enhancement Research Initiative (QUERI) at the US Department of Veteran Affairs, an initiative that connects leaders in healthcare and Veteran Affairs to implement evidence-based programs and learn from those implementation efforts. In the UK, the Collaborations for Leadership in Health Research and Care (CLAHRCs) are perhaps the most widely cited example of a systems intervention designed to bring research producers and research users in the health care system together in partnerships. In many ways this is frontier work, though there is still a regular pull back to focusing in on more and better dissemination.

Considerable progress in the field has been made. We now have a more sophisticated understanding of what counts as evidence and how that evidence might be used alongside other forms of knowledge in policy and practice.  However, there are still challenges for those interested in promoting and studying evidence use, which includes limited investment outside of healthcare in this important work. Furthermore, while the promise of co-production is a feature of contemporary debate, lay participation in the development and use of evidence still remains at the margins and difficult issues such as power imbalances between stakeholders are rarely addressed.

By taking stock of progress and ongoing challenges in the field we are hopefully in a better position to identify opportunities for evidence to play an active role in future policy and practice. 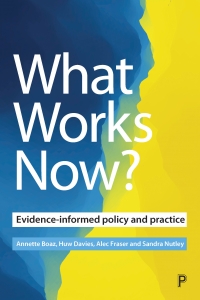