Informal refugee camps in and around Calais may no longer be in the news but the problem is far from solved. In this impact case study, Sarah Mallet shows how her book, Lande: The Calais Jungle and Beyond, co-written with Dan Hicks, and the corresponding exhibition at the Pitt Rivers Museum in Oxford, create a space for new dialogues, protest and problem-solving around the issue.

The story of the Lande: The Calais ‘Jungle’ and beyond project started with the relocation of UK border controls to Calais under the Sangatte Protocol at the Channel Tunnel terminal at Coquelles (opened 1994), and then at the Port of Calais under the Le Touquet Protocol (2003). While Europe’s Schengen Area removed many official border controls, Calais became, for those seeking to claim asylum in Britain, a place from which to make an irregular crossing.

Informal camps (‘Jungles’) have been set and dismantled in and around Calais ever since, culminating in ‘La Grande Jungle’ of 2015-2016 and continuing in much harsher conditions to this day.

Through the methodologies of archaeology, we use, in the exhibition and the book, material culture to document the politics of exclusion and violence against displaced people stuck at the UK border in Calais, but also the journeys undertaken and the networks of solidarity and resistance that were established between Britain and France. Our aim is to document the undocumented present, to make visible what would stay hidden by the politics of the present.

The show explores the status of the ‘Jungle’ as a place of protest, of conflict, of hospitality, of migration, of memory, and of continued urgency through objects loaned by activists, artists, and refugees who all set out to document and remember the ‘Jungle’ and to make visible the landscape of the UK/French border at Calais. Through these loans, our hope is to create some small duration for ephemeral things, artworks and images that have been kept, each object bearing witness to human precarity, resistance, creativity, and hope.

The writing of the book came out of the processes of co-curation, of the discussions, of the informal times, stories and jokes shared by the team. A major challenge of both the book and the exhibition was to stay true to those stories, and to make them visible at a time when the plight of displaced people in Northern France has been all but forgotten. Through four themes – Environmental Hostility, Temporal Violence, Visual Politics, and Giving Time – we hope to create a space for new dialogues around the ongoing situation at Calais.

It is indeed crucial to constantly remind the public that the situation in Northern France is not ‘solved’ because it is out of the papers, and that it is in fact worsening due to the daily harassment and violence that displaced people face. The book, and the exhibition, are our activist stance against this political situation, and we are thankful to Bristol University Press for their support in helping us getting this book out.

The exhibition is free but donations to Help Refugees are encouraged through our contactless donation point. All the book royalties are donated to l’Auberge des Migrants. 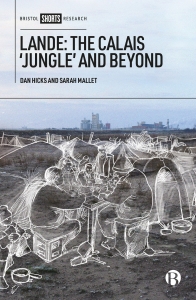 Lande: The Calais ‘Jungle’ and Beyond, by Dan Hicks and Sarah Mallet is available Open Access under CC-BY-NC licence on OAPEN.