Crossing the seas for climate change 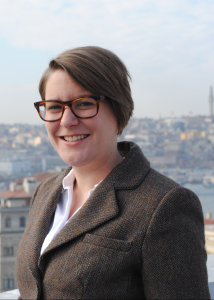 With the Global Climate Strike starting on Friday, this week we’re bringing you articles on climate change from Bristol University Press authors.

Here, Sarah Nash, author of Negotiating Migration in the Context of Climate Change, explains the need to disentangle the relationships between phenomena such as human mobility and climate change in order to bring about transformative action.

“In September 2014, the United Nations Secretary General, Ban Ki-moon, convened a UN Climate Summit in New York in order to build momentum for a global climate change agreement to be finalised in Paris the following year.

Not even two weeks before the summit, a boat carrying approximately 200 passengers capsized and sank off the coast of Libya. Only 36 people were rescued. This failed crossing, being undertaken by a group of people united by their aim to reach Europe and the opportunities promised by the continent, momentarily captured public attention and media headlines.

In 2015 the incidences of sinking boats in the Mediterranean became an increasingly common occurrence and the treacherous undertaking of crossing Europe’s external borders became brutally visible. It was in mid-2015, as more and more people successfully penetrated the external borders of the European Union, that the situation morphed into a so-called ‘migration crisis’.

At the same time, the world’s nation states were in the final stages of negotiating a climate change agreement, which was adopted in Paris in December 2015 with much aplomb. The links being drawn between climate change and migration, and the fear that climate change would lead to uncontrollable migration from the Global South to the Global North with a magnitude much greater than the ‘crisis’ of 2015 became one of the hot topics of the Paris negotiations and one of the many highly contested issues in the Paris Agreement.

Fast forward to 2019 and Greta Thunberg, the climate activist who sparked the Fridays for Future youth climate change movement, has just completed a sea crossing of her own, across the Atlantic Ocean on a racing yacht. The purpose of her crossing was to achieve carbon-free travel to New York for the 2019 UN Climate Action Summit to which United Nations Secretary General and former High Commissioner for Refugees António Guterres has extended an invitation.

Apart from the goal of crossing a large body of water, the journeys of Thunberg and those seeking to reach Europe clandestinely have very little in common. The racing yacht that carried Thunberg and her crew is a high-tech machine, crewed by professional sailors, and could be tracked by GPS as their journey progressed. Upon reaching New York, the passengers disembarked at a recognised port and entered the county through regular immigration and customs channels. The conditions of privilege that surround this journey distinguish it greatly from the precarious Mediterranean crossings that are still taking place today despite attempts from the EU to raise the drawbridge and prevent access to the fortress.

Yet the young climate activist who crossed the Atlantic and those who made clandestine crossings of the Mediterranean do have something in common. Both groups draw attention, with the very presence and movement of their bodies, to central (and interlinked) questions for global politics; human mobility and climate change. And both groups have been critiqued, mocked, attacked and subjected to outright abuse tainted with varying tones of racism, misogyny, ableism, and ageism from the far-right as a result.

Why is this the case? People utilising their mobility to come to the Global North and the youth utilising their voices to draw attention to climate change are disrupting the status quo. Not only this, they are refusing to work within the confines of global regimes that, whilst allowing for tinkering at the edges of the international system, also function as a scaffolding to support it. These two groups of people, whose presence is not usually felt in global political and policy circles, are demanding attention and threatening the carefully constructed webs of power and interests that are at these circles’ cores.

My hope for the Climate Action Summit and the next round of UN climate negotiations taking place in Chile in December 2019 is that some positive movement is made towards climate change mitigation, or to use terminology increasingly employed by the climate movement, towards solving the climate crisis. And the weight of this positive movement needs to be squarely placed on the shoulders of states in the Global North that have profited the most from their long history of unfettered high emission economic development.

These are aims very much laced with caution and a minimal amount of positive action towards reducing greenhouse gas emissions from states in the Global North could very legitimately be described as much too little, much too late. However, the confines of this summit and the policy processes of the UN monolith will not be the venues to provide transformative change.

The UN is an important venue for continuing the global discussion on climate change and the links between human mobility and climate change, but with Trump’s climate denialism mixed with border security fetishism, Bolsonaro’s wantonly negligent relationship to the Amazon, Johnson’s isolationist and particularly hard form of Brexitism, and the rising popularity of the far-right in politics across continental Europe gaining volume, inter-state negotiations can only be expected to progress so far.

Transformative action on climate change will only come from taking the time to disentangle the relationships between phenomena such as human mobility and climate change, and the forces that are working to restrict both movement of people around the planet, and efforts to save the same planet from disastrous climate change. Here my hope is much more unbridled: I hope for transformative action that means no person feels the need to step on a rickety boat to cross the Mediterranean in search of a better life; and I hope that climate activists no longer feel the need to sail across the Atlantic Ocean to hold world leaders to account on their lack of climate action.” 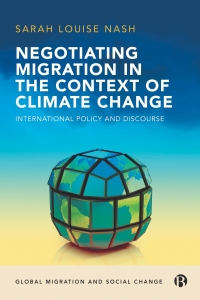 Negotiating Migration in the Context of Climate Change, by Sarah Nash is available on the Policy Press website. Order here for £60 or get the EPUB for £21.59.