The personal is the political: Relational activism and social justice

For the last six months, a giant banner emblazoned with ‘to love is to act’ has become our travel companion. It’s been at a parent activist meeting in a disused café in Kentish Town and in a British Legion hall in Bath. It’s been up the M4 to Cardiff, and it’s made its way across oceans to Turku and Oslo. ‘To love is to act’ has become a slogan for our work on relational activism – a form of activism where our personal relationships are the locus for change. 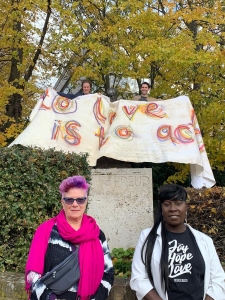 Our previous writing on relational activism focussed on its origins, values and behaviours. With ‘loving and acting’ on our minds in recent weeks (no doubt stoked by the political fervour of a general election), we have been exploring relational activism through a social justice lens. In short, how the radical nature of human relationships weaves into resistance and protest.

Take Camerados, formed in 2015 by Maff Potts, which has become an international movement of people who believe “the best way through tough times is to be there for each other”. In the last four years, Camerados have helped citizens to put public living rooms in church gardens, school common rooms and prisons, set up neighbourhood kitchens, and erected teepees in hospital reception areas as a peaceful space for connection. The Camerados ethos of friendships and purpose (or, in the words of one of our parent activists, “giving a s*** about each other”) is simultaneously an expression of love, an act of protest, and an art of showing the alternative solution. To borrow from Professor Paul Gilbert, relational activism here is “turning towards suffering… as a powerful antidote to cruelty”.

An article by Denise Tanner published in the British Journal of Social Work in October 2019 speaks to this theme. “A Love That Dare Not Speak It’s Name” examines the perceived tensions between compassion and social justice with some helpful conclusions. “Justice requires attention to both care and rights”, says Tanner, “the tension between rights and compassion can, therefore, be reconciled by a relational approach based on shared human experience”.

Of particular interest to relational activists will be Tanner’s emphasis on the ‘doing’; “small acts of kindness, or acts of emotional connectivity, that respond to private troubles are intrinsically linked to identifying and addressing public issues… the ‘desire to act’ component of compassion can lead to change at a structural level if ‘moral outrage’ at people’s suffering spurs protest and political transformation.”

We have also found powerful evidence of the connection between relationships and protest in indigenous activism. Here, relationships can be viewed as a site for ‘resurgence’. Resurgence is taken to mean to revive something lost or threatened, and in doing so to resist the forces that threaten it.  This theme is explored by Jeff Corntassel and Mick Scow in New Diversities and by Gina Starblanket in her chapter for the book “Everyday Acts of Resurgence”.

All three authors emphasise the significance of “our intimate, everyday moments” in resisting the forces of oppression. They highlight that, “everyday aspects of life may appear routine but actually represent important sites of regeneration… [where] examining everyday experiences and their transformative potential offer important alternatives to state-centric reconciliation and rights-based discourse”. 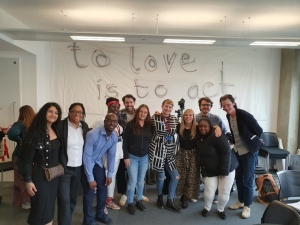 Relational activists at the ‘Relationships Making a Difference’ event, Camden, April 2019. Photo was sent to participants at the Care Experienced Conference in Liverpool that took place the same day, to send them our love and solidarity

Relational acts do not need to be big, funded or planned. Take Dave Jones, a butcher from Dewsbury, who tweeted offering to pay for school uniforms for two local families who couldn’t afford the cost. His act of kindness was probably not intended as a protest, but two things followed shortly after.

Firstly, people began retweeting offering to do the same as Dave, creating further action. Secondly, the tweet picked up national media coverage, and Dave’s local MP raised the issue in the House of Commons. This lent further weight to the campaign for schools to use unbranded uniform, which in turn emphasised the issue of child poverty. By compassionately changing the world he could touch, Dave helped to create movement in the wider world. By being active for a cause that matters, in a relational context, the personal became the political.

Another example comes from the Indigenous women who run marathons to raise awareness of MMIW (murdered and missing indigenous women). Rosalie Fisher used the platform of a state track and field championship to shine a light on the issue, a red hand painted across her mouth. Mica Standing Soldier Oglala Lakota ran a marathon with the names of 26 MMIW emblazoned across her running shirt, one for each mile. These relational activists are not only participating in collective action, but are working to connect with others in a call for justice.

The examples we cite here show that thinking, feeling and acting relationally is not passive, limited or individual. It can be understood as active, influential and collective. Corntassel describes, “these micro-processes of resurgence… can build to large-scale movements and community action… the family and other intimate sites are places where we practice relational accountability, assert rebellious dignity and move away from public performativities”.

The activist, writer and counsellor Vikki Reynolds talks of being ‘amazingly alive in our work when we are able to be fully and relationally engaged, stay connected with hope, with a spirit of social justice”. The power of relationships as a hopeful, collective social movement is already showing its potential. For every story on social media that amplifies division, another amplifies the collective power of using compassionate action to stand firm against an injustice.

A cause held strongly needs to be acted upon to realise it. There are no other guardians of relationships that heal, help and nurture, and no other rescuers of a civil, regenerative society. We’re all it. Relational activism may be quiet work. But there is no doubt it is social justice work too.

Loving and acting. Just as the banner says.

Becca is a family worker and the Head of Service for Early Help Family Support for the London Borough of Camden, UK. Becca is a Fellow of the Royal Society of the Arts, Manufacture and Commerce, and is an accredited Family Group Conference Coordinator She has worked in services for children and families for the past 18 years, and was previously a national Sector Specialist for Families, Parents and Carers for the Centre For Excellence and Outcomes. @BeccaDove2

Tim is a social worker and service manager for Family Group Conference and Restorative Practice for the London Borough of Camden, UK. He is a Fellow of the Royal Society of the Arts, Manufacture and Commerce, and a director of Energise Sussex Coast, a community benefit cooperative with a mission to act co-operatively to tackle the climate crisis and energy injustice through community owned renewable power and energy saving. @familygroupmeet