After its General Election defeat last month, the Labour Party’s election of a new leader may well see a shift away from the left towards a more centrist politics.

Here, John Weeks, Coordinator of the Progressive Economy Forum and co-editor of Rethinking Britain: Policy Ideas for the Many, provides an insightful analysis of the election results. He reveals that there was actually no evidence of a shift of voters to the centre and examines the impact of Brexit and the implications of the result for Labour Party policy.

“A month ago the UK Conservative party scored a stunning victory, burying the opposition in an electoral avalanche. Analysis of the avalanche is critically important to my organisation, the Progressive Economy Form, which endorsed and helped develop policies in the Labour manifesto (though PEF is not formally associated with any party), which are elaborated on in Rethinking Britain. But, did the election result represent a rejection of such policies, as argued by Whiteley and Clarke in The Conversation (17 December)?

The ‘Labour sceptics narrative’ goes as follows. The election of Jeremy Corbyn as leader of the Labour Party in September 2015 was a mistake and the leader made himself unpopular. The new progressive, social democratic focus of the party did not appeal to most UK voters. Labour’s surprising gains in the election of June 2017 resulted from the party’s ambiguous position on EU membership, which attracted ‘remain’ voters to the Labour Party. As the position of the party on the EU clarified, it became clear to voters that the Labour leadership, especially the Labour leader Jeremy Corbyn, represented a narrow radical faction (McFaddin, Guardian 29 December 2019). The election disaster was the necessary outcome.

A ‘Labour loyalist narrative’ unfolds the same facts differently, along lines stated succinctly by shadow chancellor John McDonnell to the BBC’s Andrew Neil immediately after announcement of the exit poll that showed Labour had lost. The election outcome resulted from the vote-attracting power of ‘get Brexit done’. The public had grown weary of the parliamentary deadlock over an EU exit agreement and wanted the issue resolved. No quick resolution is possible, but the Tory promise to act immediately and decisively crowded out all other issues, especially in face of a mainstream media overwhelmingly hostile to progressive social and economic policies. Labour’s relative success in the 2017 election showed the public popularity of many of those policies when not obscured by the Brexit issue. 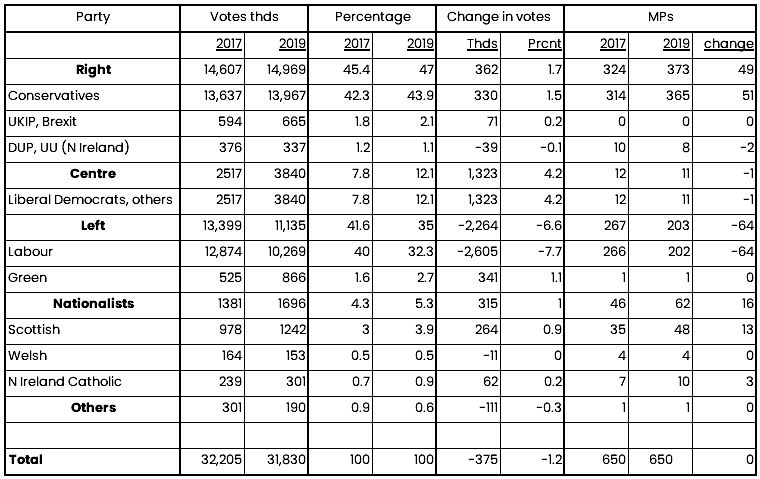 The table above provides the election results from 2017 and 2019 to assess the two interpretations of the outcome. The ‘centre’ is defined as the Liberal Democrats and the Alliance Party of Northern Ireland. The right consists of the Conservative Party, the United Kingdom Independence Party, Brexit Party, and in Northern Ireland the Democratic Unionists and Ulster Unionists.

While the Conservatives retain many from the centre-right, under the leadership of Boris Johnson its shift to the right has been dramatic, drawing support from extreme reactionaries (article by Townsend Guardian 28 December 2019). Designating the Labour Party as on the left should be uncontroversial. While at the local level the Green Party displays mixed practice, I judge its only MP, Carline Lucas, as one of the most progressive in Parliament, consistently anti-austerity.

A fourth category, ‘nationalists’ does not fit neatly into the centre, right and left categories. Plaid Cymru (Wales), Scottish National Party and the Northern Ireland parties representing the Catholic community include a range of political views, though generally advocating progressive policies.

On the basis of this four-fold division, we find no evidence of a shift of voters to centrist parties. While the centre gained 1.3 million votes compared to 2017 (+4.2%), its total share remained quite low, 12.1% – almost 88% of UK voters cast ballots for the right, left or nationalists. The election did not reflect a substantial shift of voter sentiment to the centre-left and centre-right (Aronoff , Guardian, 15 December 2019).

The table also allows an assessment of whether, despite the large Conservative win, the election outcome indicates a possible majority for remaining in the EU.

Several commentators put forward this interpretation (for example, Hutton and Keegan, Guardian 29 December 2019). It carries the policy implication that Brexit remains in political contention, and is consistent with the Labour-sceptics narrative that attributes the Conservative victory primarily to the unpopularity of Jeremy Corbyn and the allegedly policies associated with him.

Numerically, the remain majority hypothesis views the 47% share of the right as an accurate approximation of the leave vote, and contrasts this with the 51% gained by the combination of Labour, Green, Liberal Democrats and Scottish Nationalists (and higher with the Welsh Nationalists and Northern Ireland parties). This hypothesis is consistent with arguments for some form of proportional representation such that the 51% would have won a number of MPs consistent with their popular vote.

The remain majority assertion relies on assuming that the entire Labour 32.3% reflects remain voters. While many people who previously voted Labour shifted to the Conservatives because of their support for Brexit, until more detailed statistics and analysis are available, it would be arbitrary to presume that all Labour voters were pro-EU.  One should not rule out the possibility that the 2019 election showed a split between remain and leave not significantly different from the outcome of the 2016 referendum (48:52).

Further research is also required to assess the extent to which the 2019 represented a rejection of the Labour manifesto as too left wing, as many argue, or, alternatively, that ‘Labour won the argument’ (McTernan in FT 20 December 2019), and lost due to Brexit.

The forthcoming Political Studies Conference in Edinburgh in April 2020 should indicate the answer to this question. At this point it is difficult to move beyond the obvious inferences that ‘get Brexit done’ swayed the electorate, with no substantial shift of voters to the centre.” 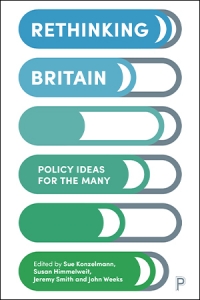