Leadership holds a mythic status in our cultures. Few of us can agree on what leadership is, yet many believe that it’s inherently good and urgently needed. Irrespective of the organisational predicament or societal crisis, ‘leadership’ is often prescribed as the panacea that will solve all ills. Our romance with leadership has kept the business of leadership (theorising, development and consultancy) profitable while maintaining systems of power.

By design of our colonial history and capitalist logic, leadership has been regarded as the preserve of straight cis-gender able-bodied white men. Not any individual white men, but the fantasy of an elite masculinity marked by individualism, assertiveness and competitiveness directed towards command and control. These ideas then serve as a model for all people, regardless of how we identify, who anxiously perform the fantasy in order to be considered legitimate leaders.

Last month a friend of mine who works at a major bank was told by a senior woman in her organisation that she needs to be less emotional if she wants to be taken seriously at work. Anecdotes like these from the corporate world are frustrating to hear because they are so painfully disconnected from the decades of feminist thought that have generated more liberatory possibilities for leadership.

The implications of leadership-as-usual extend far beyond a few chastised professionals. Our assumptions of what it means to be a ‘leader’ unquestioningly perpetuate wider ideologies that normalise the domination and oppression of those lower down organisational and social hierarchies.

In my book, Redeeming Leadership, I look to the resistive academics, art and activism of women of colour movements around the world. My hope was to explore what leadership could look and feel like if we followed those not at the apex of power structures, but those who have traditionally been marginalised.

What might be described as anti-racist feminist movements are complex, varied at times even conflicting, and born from particular local contexts spanning Black, Indigenous, Latinx and Chicanx, Middle Eastern and Asian communities. I look specifically at five sites of struggle for an anti-racist feminist principle for leadership: solidarity; self-definition; love; language and reach.

Solidarity seeks to cross divisions between marginalised people, finding interconnections in our joint fights for social justice, yet without presupposing that our experiences of oppression are the same. Many of us are stuck within narrow views of injustice where white women may argue for gender inequality but overlook racism or straight cis-gender people of colour be blind to heterosexism and transphobia. Solidarity as an ethical and political goal means recognising that we all have a stake in dismantling imperialist, white supremacist, capitalist and patriarchal systems.

Self-definition becomes a necessary struggle in our histories where the stories of those marginalised were told for them. Leadership is one example where heroic myths have served to reinforce the association of strength and virtue with straight cis-gender able-bodied white men. While marginalised people redefine who we are on our own terms, leadership itself also needs to be reimagined as something beyond command and control.

How then might we make love the foundation of leadership? This loaded word has been manipulated by our cultures into various forms of subjugation. One of the central projects of anti-racist feminism has been to reimagine love as combining acknowledgment, care, responsibility and commitment to human and nonhuman life and the natural environment. This ethic of love is grounded in the need to change the systems of power that enable gender, sexual, racial and class domination towards a more redemptive engagement with diversity.

As I write this piece in the language of the empire, which I learnt to adopt as a Chinese immigrant to Australia, I’m reminded of the monolingual, monocultural and monologic dominance of the West. Thinking beyond Western ideologies would require embracing different ways of communicating with one another and learning to understand different voices.

Even more, the form of English in which I have been trained is an exclusionary one that is largely only comprehensible by people who are highly literate, well-educated, and materially privileged. For academics and anyone else who has been taught to mobilise language for exclusion, we need to reach out to a wider audience working and living at the coalface of oppression.

Life in the margins has meant that those committed to anti-racist feminism have had to develop radical ways of being in the world grounded in solidarity, love and justice. Honouring their legacies and learning from their wisdoms may be the first step towards finding redemptive possibilities for leadership. The next critical step is to stand shoulder-to-shoulder with anti-racist feminist communities and join their struggles for life beyond imperialist, white supremacist, capitalist and patriarchal oppression.

Helena Liu is a Senior Lecturer in Management at the University of Technology Sydney Business School. 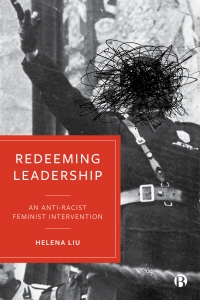 Redeeming Leadership by Helena Liu is available on the Bristol University Press website. Order here for £21.59.