Out of the abysmal: Prison education at The Open University

Eris’ story is taken from Degrees of Freedom, edited by Rod Earle and James Mehigan, which documents the vital work done by The Open University in the development of prison education.

“Only a prisoner (and possibly a prison officer) can truly understand the sheer tedium of prison life. Without considerable effort, the fact is every day is Groundhog Day – depressingly identical to the last and the next.

The majority of each day is spent in what is, to all intents and purposes, a large toilet – which is often without a lid so life is lived, and meals consumed, next to an open sewer. Being trans I’m lucky in that I never have to share my cell/toilet with another prisoner but even so the uniformity of the environment is bleak, with any attempt to personalise your living space frowned upon and treated as a disciplinary offence.

It was to puncture this tedium that I decided to provide a more varied structure to my time by studying with The Open University. My subject choice was based on reviewing a selection of module materials kept in the prison library (from previous students and transferred from regional centres when these were closed by the OU) which convinced me that while level 1 modules would be useful for those with little experience of study and essay writing, they would be insufficiently challenging for me. Fortunately, the PPE (Politics, Philosophy and Economics) degree allowed me to study a single level 1 module followed by three level 2 modules and two level 3 modules. If the OU needs to make any changes, then this is the one I would encourage, a greater variety of subjects available with only a single level 1 module.

While prison management is almost universally abysmal, I have been in the fortunate position of studying at three prisons with well-managed distance learning functions. This is particularly the case with my current prison where the level of support and commitment to OU students from the education department is outstanding – unfortunately it has to be because the general management is even worse than most prisons. For example, it took over ten months to obtain the pen and cartridges I wanted to write my exam. (I prefer using a ‘proper’ ink pen to biros and am a tiny bit OCD about this) and that only happened after I threatened legal action. The response was to minute a statement in the prison council (a body of lickspittle prisoners that provides an invisibly thin veneer of accountability of management to prisoners) that a procedure for obtaining study materials existed. Interestingly, this worked because obtaining more cartridges for my third year of study took only (sic) six months! Mind you, no one else has managed to get it to work and I only obtained the academic year diaries I had sent in by a friend by writing to my MP (it appears that Grayling’s book ban* lives on, lightly disguised with the allegation that books and diaries might be soaked in some psychoactive substance … like education and knowledge perhaps?).

The great thing about studying at this particular prison is that the number of OU students means that we can interact and support each other. It is much easier to spot your own faults when you are reviewing someone else’s TMA (tutor-marked assessment) and realise you make exactly the same errors you are pointing out to them. It’s quite surprising just how uncritical we can be of faults in our own work. This, of course, is where the support from OU tutors comes in – whether by tutorial visits to the prison or telephone tutorials they have been wonderfully supportive and argumentative, making me think clearly and justify the positions I have taken. I suppose on reflection, I might have read more post-structural philosophy than was strictly necessary and I ought to apologise for that!

Thanks should also go to the county library services of Nottinghamshire, Staffordshire and Cambridgeshire who have provided access to endless useful books through their support of the prison libraries. Indeed the library here (supported by Cambridgeshire) has acquired so many new philosophy and politics texts over and above those I requested (which were more often than not purchased) that I’ve struggled to read them all and irritated a number of tutors by quoting from works they then have to check!

In an innovation this year, the Open University Students Association (OUSA) has introduced a research support facility for level 3 students that has proved absolutely brilliant. It has allowed me to ask the OU support manager here to print queries from Google Scholar that I can select from and send to OUSA knowing that the selected articles will be printed and sent to me in a week or so.

As I write this, I am 10 days from release. OK I have one TMA and an EMA (end-of-module assessment) to complete and post next week and an exam to sit a month after release, but I’m already signed up for the final level 3 module (Key Questions in Philosophy, starting October) that will complete my degree and provide a comforting element of continuity between prison and my first year out.”

* In 2012, as the government’s Justice Secretary, Christopher Grayling, banned prisoners from receiving books from relatives or friends. Challenged in the court by The Howard League for penal Reform, the ban was ruled unlawful in December 2015. 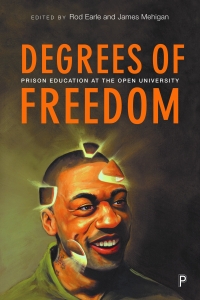 Degrees of Freedom by Rod Earle and James Mehigan is available on the Policy Press website. Order here for £21.59.