The human crisis created by the politics of greed

In the Influences and Consequences report, which is the conclusion of the ten-year Preventable Harm Project published by the Centre for Welfare Reform, Mo Stewart reveals the human consequences of the adoption of neoliberal politics, and the influence of corporate America since 1992, that guaranteed the creation of the preventable harm of the UK disabled community who are unfit to work. Following the publication of the Marmot Review last week, the importance of this research is even more clear.

“For the past ten years I have been identifying the inevitable preventable harm created by the adoption of neoliberal politics, the planned demolition of the UK welfare state and the influence of Unum Insurance since 1992 with successive British governments. Gradually, the UK is being transformed from a welfare state into a replica of an American state, with the planned future adoption of private health insurance to eventually replace the UK’s financial safety net, with a guarantee that people would suffer for the crime of being ‘unfit to work’.

The harmful welfare reforms adopted by New Labour in 2008 were dramatically increased by the brutal welfare reforms introduced by the coalition and Conservative governments since 2010, when adopting unnecessary additional austerity measures, which were exposed as being ‘a political choice, not a financial necessity’. Consequently, preventable harm was guaranteed in every successive social policy Green Paper and is identified by this researcher as linking back to what was termed a long time ago as Thatcher’s ‘dark legacy’.

The ongoing suffering of those in greatest need was created by the work of only three men, namely Professor Sir Mansel Aylward and Gordon Waddell whose 2005 commissioned report justified the welfare reforms and the adoption of a biopsychosocial model of assessment (BPS) for claimants of disability benefit. In his 2007 commissioned report, millionaire former banker David Freud recommended the assessments should be conducted by the private sector, which added vast additional costs to the welfare budget. The ‘Freud Report’ subsequently failed academic scrutiny as Freud had ‘got his numbers wrong’ and had misinterpreted his own references. 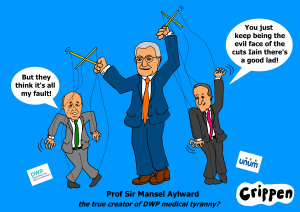 It was the Conservative Prime Minister John Major, in 1992, who invited the American corporate insurance giant Unum (Provident) insurance to advise the British government on future social policies. By 1994, Unum Insurance were appointed as the official government adviser on welfare claims management, and the company funded Waddell and Aylward’s 2005 report as commissioned by the Department for Work and Pensions (DWP).

The Waddell and Aylward recommended BPS model of assessment was adopted by the DWP for the work capability assessment (WCA), used to limit access to disability benefit, and was subsequently discredited by academic experts as offering ‘a chilling example of policy-based evidence.’

The devastation experienced by those in greatest need by the impact of the welfare reforms, plus the additional austerity measures, were created using flawed commissioned research and the chronically ill and disabled community were destined to suffer. Many have died with their deaths linked to the WCA, and many committed suicide when the DWP guaranteed that all hope was lost.

All this was made possible with the adoption of neoliberal politics, which was initially adopted in the UK by Thatcher, and by every successive UK government since Thatcher, as the politics of power, profit and greed swept the world (OECD, 2003). The human consequences of the adoption of neoliberal politics is rarely identified, and few in the UK have stopped to identify the crisis created by the politics of greed.

The only guarantee is that with each passing year more preventable harm is created by the UK government for those in greatest need, who have got the message that they are nothing more than a financial burden on the state. Their needs are considered to be cost prohibitive to a neoliberal government where reduction of welfare cost is the only priority, and any and all welfare costs will be reduced by the adoption of dangerous social policies regardless of human consequences.

Testimony of need by the disabled community is challenged and disregarded by the DWP, at a cost of £1.6billion over a three year period for unaccountable private contractors to conduct a fatally flawed disability assessment (PAC, 2016). No-one is held to account for the manipulation of the British public by politicians who lie for a living. They are very experienced and successful as they manipulated Parliament to adopt social policies which were guaranteed to cause preventable harm, destitution and death when, quite literally, ‘killed by the state’.

Where are the political debates against this ongoing state sanctioned atrocity by wellinformed politicians, who know about the corporate influence of Unum Insurance, who were identified as the second worst insurance company in America, and who have influenced the UK government since 1992 on the planned future demolition of the UK welfare state?

In order for neoliberal politics to succeed for the adoption of welfare reforms, it was necessary for successive UK governments to disregard medical ethics and any adherence to a moral code. This was demonstrated in a statement by Professor Philip Alston, the visiting United Nations Special Rapporteur on extreme poverty and human rights, following his visit to the UK in 2018.

Added to the financial burden, there was also a political plan to demolish the psychological security of the welfare state to make it easier to remove. Therefore the disabled community, who were financially dependent upon the welfare state, were demonised for a period of five years by a vicious Secretary of State. Aided by the tabloid press, Iain Duncan Smith successfully blighted the reputation of the disabled community with his bogus claims, which impacted on the public as prosecuted disability hate crimes increased by 213% when he held office.

Following ten years of study it seems clear that nothing will improve unless the general public are alerted to the preventable harm created by the influence of Unum Insurance with British welfare reforms. Without the support of the national press this can’t happen, and the chronically ill and disabled community will continue to live in fear of the DWP.” 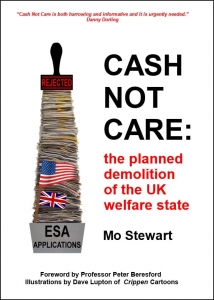 Mo Stewart is an Independent Disability Studies Researcher and author of Cash Not Care: the planned demolition of the UK welfare state (New Generation Publishing, 2016). Find out more about the author here https://www.mostewartresearch.co.uk and on ResearchGate.