Children’s photos reveal need for a new narrative of care

During a visit to the US/Mexico border to meet with migrant children, the First Lady of the United States famously wore a jacket emblazoned with the words “I really don’t care, do U?”. This message created a swirl of attention in the national and social media spheres, as well as a tide of anguished speculation about its intended meaning. The spectacle drove home the point that it is time for a new narrative of care in society.

Who cares? How and why do we care? Who is obliged to care for whom? With what effects and consequences? What are the moral and political imperatives of care? These are the questions that animate my book, Children Framing Childhoods: Working-class Kids’ Visions of Care.  Alongside years of observation in urban public schools, and following 36 kids growing up in working-class communities of color, who were given cameras to photographs their lives over time (at ages 10, 12, 16, and 18), I learned that kids’ have perspectives on these questions that demand our attention.

A routine morning school interaction I witnessed highlights the everyday contingencies of care faced by kids, parents and school officials:

Six-year old Antonio stands in the office doorway of his public school that serves migrant, working poor families of color. He and his brother Cesar live in a public housing complex around the corner from the school. Miss Corey, the school secretary greets him with a smile, “did you just get here?” Antonio nods his head yes. “Your mother didn’t wake you up this morning?” Antonio rocks back and forth. “Did your brother already go to his classroom?” Antonio nods his head yes. “Go ahead on, I won’t write you up.”

Before Antonio is out the door Miss Corey remarks to me, “He’s covering for his mother. It is a tough home situation, so tough. His mom has two jobs and works double shifts every other week. His older brother is in third grade and has been getting himself to school since kindergarten, and now he’s responsible for getting Antonio to school too. They are late all the time.”

Miss Corey perceives the boys as ’covering‘ for a mother who hasn’t fulfilled her care obligations.  But she is sympathetic to the plight of the boys’ single mom, an immigrant from Dominican Republic who works tirelessly to provide for her children, and doesn’t want to punish the boys.

Miss Corey’s willingness to bend school rules resonates with countless numbers of teachers, workplace managers, and medical personnel that US poverty researcher Lisa Dodson interviewed. She found a ’moral underground‘ of middle-class people witnessing the effects of poverty wages and feeling compelled to do something to mitigate the risks and hardships imposed by an unfair economy. Miss Corey’s actions are an exception that proves the rule: schools punish students who need to care for themselves and others.

How do Antonio and Cesar perceive the situation, including their mother’s care? What sense does Antonio make of Miss Corey’s words and actions?  How does Cesar experience his care giving responsibilities – as a burden? A source of pride and self-satisfaction? As conflicting with school demands? As a source of anxiety? How do both boys manage their feelings? How do schools and society calculate the value of children’s hidden labour?

Cesar is among the estimated 1.4 million American children from ages 8 to 18 who provide care for a sibling or older adult, including approximately 400,000 children who are between the ages of 8 and 11. Aside from routine tasks of cleaning, shopping, laundry, and supervising younger family members, children’s care work also extends to caring for ill and disabled family members – dispensing medication, lifting, dressing, bathing, communicating with doctors or nurses, and keeping a care recipient company.

We know far too little about the inequitable distribution of care demands on kids’ lives.  When given the opportunity, it was striking that the kids in this project used their cameras to portray the extent of their own care work, as well as making visible and placing value upon the care work of others – mothers, grandmothers, teachers and friends.  They took pictures of many kinds of care activities (e.g. cooking, laundry, helping siblings and friends finish home work, translating for family members) and spoke about care as a concerted, collective effort that enables their own and others’ participation, learning, and sense of belonging at home and in schools.

We live in a society where care is commodified, coerced, invisible and ‘passed on’ to others in ways that sustain inequality.  This creates what feminist philosopher Joan Tronto calls a culture of ‘privileged irresponsibility’, where some people are allowed to be ‘care-free’ while others are denied the basic freedom to care for their families.

This distorted notion of freedom operates in education, where children and young people are assumed to be ‘care-free’, unencumbered and able to focus all their time and energy on individual academic achievement. That vision is sustained in middle- and upper-class families, who can afford to arrange for support to ensure their children’s competitive advantage. The success of these care-free children helps to sustain the educational ideology of meritocracy, promoting the idea that those who rise to the top have done so because of their own effort and merit, while those who fail have only themselves to blame. The same ideological implications are extended to schools serving families of means: schools with care-free students support a particular version of school success while serving as justification for blaming and stigmatising those schools which fail to measure up to imposed standards. According to this logic, then, ’failing schools‘ also have only themselves to blame.

Most troubling about idealising the ‘care-free’ student is that it leads to a conception in which freedom means not having to care. Even if it were possible to ensure that all students were ’care-free’, such a notion of freedom undermines democracy. Being ’free‘ from care responsibilities – ‘free’ to act on self-interest, ‘free’ to operate, untethered and uninhibited, in the market, ‘free’ to pass care work to others – corrodes the social fabric of connection, community and solidarity across differences.

The kids in this project turned the camera lens on care as more than work, duty, obligation – though it is these things, too.  A new narrative of care would include their regard for care as a collective activity and social good. 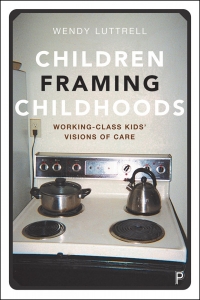 Browse photo and video from the project on the companion website.