Indigenous research has forefronted approaches, theories and concepts that challenge Western research practices in a variety of ways. It also presents a challenge to Eurocentric notions of research ethics. In this blog, Bristol University Press author and indigenous criminologist Juan Tauri examines the problems indigenous researchers face when dealing with ethics boards and points to solutions.

There is a story doing the rounds amongst Indigenous scholars: during a meeting of Indigenous community about a request for their participation in an academic research project, a number of members complained about the time spent on ‘outsiders’ research, with one exclaiming that the community ‘was being researched to death’. In response, an elder who had been sitting the whole time quietly in the corner finally spoke, saying ‘well, then perhaps it’s time we researched ourselves back to life’.

This story nicely encapsulates the current state of affairs with regards to Indigenous peoples and academic research; for so long a relationship fraught with tension and mistrust. This is borne of Indigenous people’s experiences of research, from our political, social and cultural revitalisation, our resistance to contemporary manifestations of the colonial project, including our critique of academic (and by extension, state-centred and sponsored) research, and reconstruction of our own processes for gathering and disseminating knowledge.

So how do we explain the current state of affairs of research ethics processes in New Zealand and other settler-colonial contexts? The experiences of Indigenous commentators and researchers points consistently to one key source of discontent, namely the performance of academic institutions Research Ethics Boards (REBs), especially the fact that their members generally lack experience of Indigenous communities and the core principles and practices that guide Indigenous knowledge construction and dissemination (see Smith, 1999). Sadly, in my experience, and that of other Indigenous researchers, said REBs then make decisions about the appropriateness of Indigenous scholar’s ethics protocols, despite lacking the necessary socio-cultural experience and knowledge to make informed decisions on the ‘ethics’ of engaging with Indigenous peoples.

Arguably, in the case of Indigenous-focused research, the lack of knowledge and experience of the research context is of greater risk to both researcher and participants than lack of disciplinary expertise. Hammersley (2006, p. 4) describes the dangers thus: “Researchers’ decisions about how to pursue their enquiries involve weighting ethical and other considerations against one another, and this requires detailed knowledge of the contexts concerned”. By drawing conclusions on the ethics of research situations they have little expertise in or knowledge of, and ignoring advice from those with the relevant experience, REBs place Indigenous researchers and their research participants in danger of experiencing ‘unethical institutionalised research’.

While following and conforming to an institutionalised ethics process means you have ‘acted’ as an ethical researcher in that particular context, the experience of the author, his research participants and the published (critical Indigenous) record, demonstrates that simply following REB processes does not guarantee ethical research ‘on the ground’. Instead, I argue that conformity to the Academy’s perspectives on ethical research comes with significant, potentially ‘unethical’ baggage because, as Knight et al (2004, p. 397) argue, institutionalised ethics protocols are a set of “cultural norms that [serve] the interests and reflects the values of the [REB] and the academy”. These cultural norms, replicated through mandatory engagement with institutional ethics processes, reflects the ‘knowledge by mass production’ that permeates so much of the Academy today; the dangers of which are beautifully summarised by Lorenz (2012, p. 606) who writes that:

We should not be surprised…. that universities have been changing in the direction of academic capitalism in the form of entrepreneurial McUniversities. This development boils down to ‘a move from elite specialisation with strong professional controls towards a ‘Fordist’ mass production arrangement’.

The McDonaldisation of the Academy is perhaps most evident when the formalisation of research becomes married with an over-reliance by academic institutions on universalistic processes of knowledge construction. This situation, combined with the general lack of expertise of REB members of the Indigenous social context, generates an environment where Indigenous pursuit of knowledge is often seriously impeded by the inherent contradictions in the Academy’s Eurocentric notions of ‘right conduct’ in the research context. In other words, the bias shown towards the individual research participant severely restricts the use of ‘collectivist’ approaches to important aspects of the research process, including informed consent.

Doing things for ourselves

I have advocated elsewhere that Indigenous peoples develop independent REB(s), modelled on our specific socio-cultural and ethical principles and practices. What is being proposed here is neither novel, nor unrealistic. Precedents have been set by other Indigenous peoples residing in settler-colonial including the Cherokee in the US, and Mi’kmaq Grand Council of Mi’kma’ki in Nova Scotia, Canada. No doubt the construction of autonomous, Indigenous-dominated research ethics processes could cause discomfort for some university REBs and non-Indigenous researchers. After all, as Glass and Kaufert (2007: 27) write REBs “are accustomed to being the sole arbiters of the ethical acceptability of a project. With contemporary demands for Indigenous participation, they may now be asked (or told) to collaborate with communities who perform another review”.

It is likely also, that some researchers, including Indigenous scholars, will advocate for our continued participation in existing REBs, so that we might assist them to enhance their processes ‘from within’, in a display of beneficial co-operation. There is some validity to this position because most, if not all New Zealand REBs involve Maori academics as members or external advisors, and it is becoming an increasingly common practice in other settler-colonial jurisdictions.  Also, most committees include in their protocols a sub-section dedicated to ‘protecting’ vulnerable populations such as Indigenous peoples. And yet despite all this, Indigenous academics and post-graduate researchers continue to report being victimised and sidelined by analysis and decision-making behaviour of these committees.  So, by all means let us carry on being members of REBs, and provide gentle chastisement for any unethical, disempowering conduct and decisions. But let us not lose sight of who they work for in the first instance, namely the institutions in which they reside. We need to force the issue by developing our own institutional bodies dedicated to advising, nurturing and supporting our post-graduates and established researchers. And they also be capable of holding REBs, government agencies and private sector researchers to task if their conduct negatively impacts Indigenous researchers and research participants.

Juan Tauri is Senior Lecturer in Criminology at Waikato University, Aotearoa/New Zealand. He is co-author (with Chris Cunneen) of Indigenous Criminology, published by Bristol University Press in 2017. He tweets at @jtaur1. 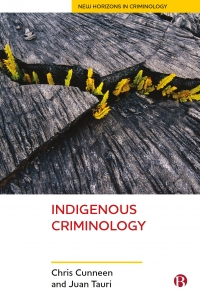 Indigenous Criminology by Chris Cunneen and Juan Tauri is available on the Bristol University Press website. Order here for £18.39 or get the EPUB for £18.40.