The COVID-19 crisis has made me, like most people, reflect on previous assumptions about how the world works. What reinforces what we thought before, and what should make us reassess previous beliefs? As the crisis struck, I was putting the finishing touches to my book Culture and Values at the Heart of Policy Making. How many of my arguments have been enhanced by what happened, and how many might need to change?

An obvious point is that the crisis immediately highlighted the central place that judgements about values have in policy making. Politicians have had to balance risks to lives and to livelihoods, among different groups of people and different parts of the country. These choices are inextricably linked with moral questions, and a sense of what is valuable, what is right and wrong. The German government, which so far seems to have had a ’good crisis‘, recognised this early on and involved philosophers and theologians among the thinkers brought in to advise on what to do. This shows a healthy ability to be honest about the fact that value-judgements and ethical dilemmas are central to what governments need to wrestle with.

In many other countries, including the UK, natural sciences and modelling expertise instead has been firmly at the forefront. What the crisis has demonstrated, however, is that appealing to ’science‘ does not enable policy makers to escape from culture and values. As I argue in the book, science and data lands not on a blank sheet of paper but into an existing culture, with its own world-views and ways of processing information. One person’s incontrovertible scientific fact is another person’s prejudice or opinion. The heated debates you can see on Twitter about which sets of coronavirus data to focus on illustrate this well, as do the strong criticisms that the government received in some quarters for using behavioural science or ’nudge‘ approaches. Some commentators seemed to feel that behavioural science was not a legitimate input to the pandemic response, based on a set of values about what inputs were valid rather than empirical evidence.

Science and scientists are also being used not just as inputs to decision making but as part of constructing a narrative. The symbolism of scientists leading Downing Street press briefings is as important to the Government’s approach as the scientific content that they are providing either publicly or behind the scenes. And it is striking that the four governments in the four nations of the UK are all using the same rhetoric about ’following the science‘ while coming up with different policy prescriptions.

It is too early to tell how voters will blame and reward governments for their performances during the crisis and the social outcomes that result. However, some early indications reinforce the message in my book that culture and values can overwhelm policy delivery when it comes to how people assess government performance. Incumbent governments in different countries all saw a significant increase in popularity in the early weeks of the crisis. This happened across the board, despite the clear evidence already emerging of very different levels of success in controlling the outbreak and reducing both case numbers and fatalities. It seems that a cultural desire to pull together and support joint endeavours often overrode data that was starting to point to relative success or failure. People had very few frames of reference (not having experienced a pandemic before) and the cross-national case growth charts that proliferated across the media do not resonate in the way simple symbols and slogans (‘protect the NHS’) do.

Another theme I discuss in the book is the challenge that culture poses to policy implementation. Decisions made by governments are only as successful as cultural practices in implementation bodies and among the public allow them to be. We might expect a crisis to create a more centralised command and control type model, and this has proved true in some areas (for example around financial market interventions by the Treasury and the Bank of England). However, in other areas the importance of culture for policy implementation has been very clear. One example is the slow start to the new Coronovirus Business Interruption Loan Scheme, because it appeared that front-line loan officers in banks were continuing to treat applicants in the same way and at the same pace as they would for conventional lending. Another example is in schools: while the Government didn’t require schools in England to close until 20th March many parents had already started to withdraw their children as they made a value-judgement about the trade-off between infection risk, childcare and education.

The pandemic and its impact still has some way to run. At least some of the long-term implications are likely to surprise us all, and governments will face a range of unexpected challenges. Biology, chemistry and economics will be important tools for policy makers to use, but so will anthropololgy, psychology and philosophy. I suspect that understanding culture and values will be as important as understanding viruses and vaccines.

Stephen Muers has held a wide range of senior policy making roles. He is currently Head of Strategy at Big Society Capital and a Policy Fellow at the Institute of Policy Research, University of Bath. 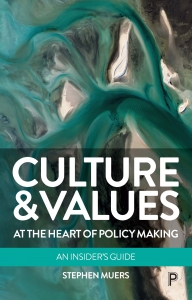