Is there any point in a Black History Month when the other eleven months are for white history?

The idea of a Black History Month originated in the US, to teach honestly about lives of African-Americans both during and after slavery. It was taken up in England in 1987 by a Ghanaian teacher, Akyaaba Addai-Sebo, who coordinated projects on Africa and slavery in London. This particularly annoyed Prime Minister Margaret Thatcher, who noted in her speech to the Conservative party conference that year: ‘Children who need to be able to count and multiply are being taught anti-racist mathematics, whatever that might be’. She then abolished the Inner London Education Authority along with its anti-racist work.

Official suppression of Black Studies already had its own history. In 1972, a Black Studies course was being taught in a Birmingham school, emphasising African history, slavery and black identity. There were complaints about the course, including from some teachers, claiming that such studies could aggravate racial tensions. The Chief Education Officer in the city visited the school and the course was closed down. Despite such hostility, Black History Month, supported by teachers, parents and much of the public, has continued to develop over the years in the UK and in other European countries.

But will this educate all young people for a future of equal citizenship? From the development of mass education in England a century and a half ago, there has been a dismal failure at all educational levels to alleviate ignorance and xenophobia and teach honestly about the British Empire, the worldwide looting of land and labour, and the barbarous cruelties that accompanied the glorification and triumphal displays of military might and economic power. Schools and textbooks were always largely places of myth-making and evasions from the truth. Until the 1970s, maps of the world still had large sections coloured pink because the countries ‘belonged to us’. A glossy text on The Victorians selling in 2020 presents the ‘British Empire as the largest the World has ever seen’ complete with the well-known 1886 map with Britannia on her throne, military men in uniforms and the inevitable bare-breasted ‘native’ women. For years, legends of imperial triumphs and conquests formed the basis for a widespread belief in a superior British heritage, and all school subjects, especially geography, history, literature and religious studies were imbued with imperial values.

The greatest omission came from 1947 onwards, following the independence of India and that of other former colonies (either peacefully or with violence), with a lack of information and teaching about what was happening. There was widespread ignorance as to why people from former colonies had the right to come and live and work in Britain. Empires do not end in national segregation, especially when the labour of the former colonised is needed, and imperial subjects had fought to help win a war for democracy. There was no explanation for the presence of black people, and the overt and covert racism and crude beliefs which were a legacy of empire continued in schools, as in most other areas of public and private life.

Much of what politicians describe as British culture and values had been reflected in the curriculum over the imperial years. Despite claims that the values of democracy, tolerance and the rule of law prevail, Britain’s actual values still largely reflect a world view in which racial and white moral superiority and offensive views towards other nations are acceptable. As Foreign Secretary, Boris Johnson announced that ‘The African continent is a blot, but it is not a blot on our conscience. The problem is not that we were once in charge, but that we are not in charge any more’, going on to boast that ‘of the 193 present members of the United Nations’ we have conquered or at least invaded 90 per cent of them’. His more recent comment that women wearing a niqab look like letterboxes was given wide publicity, although it is ironic that we are all now being urged to cover our faces to halt the spread of coronavirus.

Nostalgia flourishes with ignorance of our imperial past. Many of the people who voted for Brexit were nostalgic for the days when imperial subjects laboured overseas and never came to live in the Mother Country. This should not be surprising. The third edition of a school textbook on The Southern Countries, published in 1973, noted the enormous benefit goods from Africa were bringing to Britain, as ‘Railways have been built and roads constructed under European guidance’, with Africans doing the manual labour. Race and empire shaped the concept of national citizenship, to the exclusion of the formerly colonised. Imperial beliefs, and the gradual loss of profits from the empire contributed to a nostalgia for the old times, with a recent poll finding 40 per cent of those surveyed agreeing that the British Empire was a ‘good thing’.

It is easy to discover the racism, imperialism and xenophobia in texts and teaching up to the recent past, especially in the ‘public’ schools which have educated most of our influential leaders. It is not so easy to examine the education of young people currently in education (although formal schooling has been disrupted in 2020 due to the global pandemic and spread of the COVID-19 virus, education goes on with parental, peer and social media influence). There is some information on those who have passed through schools since Michael Gove reformed the curriculum in 2013 in a more nationalistic direction. Gove appeared to be heavily influenced by a popular book published in 1905 entitled Our Island Story: A History of Britain for Boys and Girls written by H. E. Marshall for primary schoolchildren. The short stories romanticised Great Men (and the occasional woman) who had created Great Britain. Gove’s reforms resulted in a narrowed, subject- and selected fact-centred curriculum with little teacher input. The Director of the South Asian Studies Centre at the London School of Economics complained in 2016 that having gone through the Gove curriculum, ‘students arrive at university completely ignorant about empire; they have no clue as to the history of immigration and they don’t understand why people of other ethnicities came to live in Britain – they haven’t learned about it in school’. Although some teachers, especially in history and geography, are making valiant efforts to teach more honestly about the past and present, assisted by materials from (mainly black) voluntary organisations, there is no guidance from government. Leadership and awareness now comes from footballers, Colin Kaepernick in the US kneeling before a game in September 2016 to protest against racism, a move taken up by the now-global Black Lives Matter movement. In England, 22-year-old Premier League footballer Marcus Rashford, brought up as a Black man in a low-income family, shamed the government into giving poor children free school meals in June 2020.

The global COVID-19 pandemic will pass, but the economic consequences for Britain of leaving the European Union and the gradual but final ending of empire will affect society and the economy for years. The issue now is whether society can be transformed into accepting the reality that former imperial subjects really are equal citizens. Education at all levels has a crucial role to play and the aim should be honesty. More children and young people may be successfully schooled into passing tests, but they are not successfully educated. In Britain – England especially – we continue to manufacture ignorance of the past in a fragmented education system, still imbued with imperial resonances, but facing a future in which it is becoming clearer that imperial inequalities have no place.

Sally Tomlinson is an Emeritus Professor at Goldsmiths London University and an Honorary Fellow in the Education Department, University of Oxford. She has been researching, teaching and writing for over 35 years in the area of race, ethnicity and education and education policies. Her most recent book with Policy Press is Education and Race from Empire to Brexit (2019). She is also co-author with Danny Dorling of Rule Britannia: Brexit and the End of Empire (Biteback, 2020) 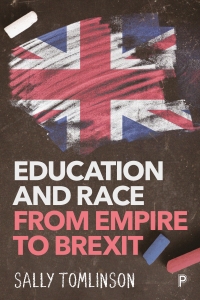 Education and Race from Empire to Brexit by Sally Tomlinson is available from Policy Press, imprint of Bristol University Press. Order the book here for £18.39.

Image Credit: Imperial Federation Map of the World Showing the Extent of the British Empire in 1886. Boston Public Library via Flickr (CC BY 2.0)