Private renting and affordability: is COVID-19 making it worse?

Housing affordability issues in England are heavily concentrated among private tenants – not just because many have low incomes and face high market rents but because the income support system no longer offers full protection against housing costs even for the poorest. Without additional government support, COVID-19 will make the situation worse.

The government has done two things to help private tenants since COVID-19: they have increased the Local Housing Allowance (LHA) cap to match the 30th percentile of rents in each local area, reversing the four-year freeze put in place in 2015; and they have suspended all eviction proceedings until the end of August. Landlords have also been asked to do all they can to support tenants before starting proceedings in the case of rent arrears. But many tenants are not in a position to pay – and cannot be sure when they will have the money. We are already seeing illegal evictions rise and lodgers and sofa surfers being thrown out of their temporary accommodation, but when September comes the situation is likely to be a great deal worse. It is time for more fundamental reforms, both with respect to security of tenure and the principles behind income support.

Our latest book Understanding Affordability brings a fresh eye to the longstanding issues surrounding adequate affordable housing. Written from the viewpoint of housing economics, it examines how the housing system works, its pressure points and policy approaches.

One of the many pressing issues discussed in the book is the extent to which private renting often does not meet quality, affordability and security standards. Yet since the turn of the century, increases in the number of privately rented homes have accounted for almost 80 per cent of the growth in the housing stock in England, while numbers have actually fallen in the social rented sector and risen only slowly in owner-occupation scenarios.

Our analysis shows that the private rented sector is the location for many of the biggest housing affordability issues – so it is not surprising that it is the sector showing particular strains in the face of the coronavirus.

There are four fundamental reasons why this is the case:

At the turn of the 21st century, fewer than 10 per cent of dwellings in England were in the private rented sector (PRS) – accommodating mainly younger, more mobile households. By 2019 that proportion had almost doubled to nearly 20 per cent of the considerably larger stock (see graph below). Moreover, the mix of households has changed rapidly with many more family households in the rental sector. The latest English Housing Survey figures, for 2018/19, show that more than one in three households who are privately renting have dependent children – a higher proportion, and therefore a much higher number, than in the social rented sector.

Percentages of dwellings which are owner occupied, in the private rented sector or provided by the social sector in England (2000 – 2019) 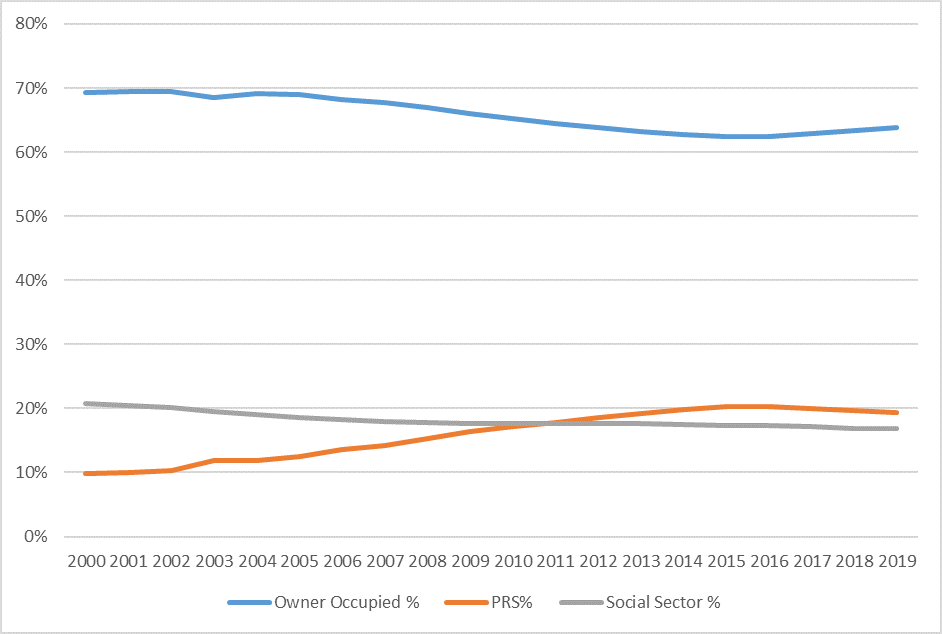 Private tenants pay more of their income in rent

It has always been the case that private tenants pay more than those in the social sector simply because they pay market rents. But, especially as interest rates have fallen, they also pay far more than those buying their own home. On average, first-time buyers spent only 18 per cent of their household income on mortgage payments in 2018/19. Rent payments were 27 per cent of income for social renters. But private tenants on average paid 33 per cent of household income – even taking account of housing benefit.

Private tenants get less for their money

What private tenants get for their money is very different from households in other tenures. While average standards have increased, privately rented accommodation tends to be smaller, often in older houses in multiple occupation and have more people sharing.

Most importantly, almost all private tenants have very limited security of tenure. The typical Assured Shorthold Tenancy lease is for six months or one year, and the landlord can refuse to extend it without giving any reason. Of course many tenants stay for many years with no problems, but this legal position inherently makes people less secure – especially about making complaints if the property is not up to standard.

Around half of private renters in the lowest income quintile are receiving Housing Benefit/Universal Credit to help them pay their rent, as are over a third of those in the second lowest quintile. But benefits are much more restricted than for social tenants. Firstly, the rent that can be charged is subject to LHA limits which means the benefit paid cannot be above the lowest 30 per cent in the broad market area in which they live. Secondly, in higher-rent areas, even at this level of support, increasing numbers of tenants hit the welfare cap and so the household does not get the full amount; moreover, most younger single people only receive a shared accommodation rate, whatever their housing circumstances. So, even though housing benefit to private tenants is costing the government around £10 billion a year, many tenants are not getting the help necessary to allow them to pay the rent and still buy other necessities of life.

How can the government help?

It is clear that large numbers of tenants will not be able to pay their rent. At worst this could lead to a spike in homelessness at the end of the year. To alleviate these problems, the government could:

Christine Whitehead is Professor Emeritus in Housing Economics at the London School of Economics and Deputy Director of LSE London.

Understanding Affordability by Geoffrey Meen and Christine Whitehead is available from Policy Press, imprint of Bristol University Press. Order the book here for £21.59.