As the UK emerges tentatively from lockdown, and the economic and social implications of the crisis start to solidify, there is an inevitable and valid debate about what shape our post-COVID-19 future will take. There has been a rush to suggest that the greatest domestic crisis since the Second World War will herald a second golden age for welfare, similar to Labour’s post-war reconstruction of the welfare state.

This is underpinned by suggestions that a new mood of solidarity is perhaps being forged because of the collective societal response to the shared societal challenge. Could this be our new ‘Beveridge moment’? Does 2020 present an opportunity to shape a new settlement and consensus for state intervention and spending, riding any shift in public attitudes? We are both hopeful and sceptical here, and also cautious about how far policy making is in fact directly driven by (or in fact drives) changing public attitudes.

Back in 2016, we explored issues around public attitudes to ‘welfare’ for a special issue of the Journal of Poverty and Social Justice. We are not inclined to take a lessons in history approach, which is suggestive of the past somehow being replayed under contemporary circumstances. However, there are clearly historical lessons from the foundation of the welfare state; and here what matters is that we are precise about what they are and don’t overplay (as is so often the case) what the golden age of welfare actually looked like. Contrary to popular belief, the welfare state was not established on a groundswell of popular support. Attitudes to the welfare state have always been volatile and uneven with some policy areas receiving greater support. Values and divisions drawn between deserving and undeserving groups have been especially enduring, even if there may have been some notable shifts around quite who ‘counts’ as deserving over time.

How might COVID-19 and the state’s expansive role during the pandemic impact on and perhaps alter public attitudes to welfare? Drawing on the work we did for the journal, here are just three key things to look out for in the coming months:

Firstly, we have seen a rapid rise in the number of people now reaching out to the UK government for financial support, in many cases for the first time. Between 1 March and 16 June, the DWP received over 3 million claims for Universal Credit. By 28 June the furlough scheme had covered the wages of 9.3 million jobs and 2.6 million claims had been made to the Self-Employed Income Support Scheme. We know that claiming social security is likely to make those who have contact with the system more generous in their attitudes to welfare but we question whether those benefiting from income protection will identify themselves as receiving ‘welfare’. Nonetheless, the experience may garner support for the state to provide an adequate safety net for people when they are struggling. Debates about access to, and the level of, sick pay for workers forced to self-isolate had already laid bare the inadequacy of statutory provisions before lockdown began. Those claiming Universal Credit, possibly for the first time, will have an atypical experience which may colour their attitudes to claiming the benefit. Fast-tracking, no conditionality and higher-than-usual payments are just some of the ways their experience of claiming UC has been distinctive, and arguably more positive. Moreover, many new claimants have been able to benefit from additional protections such as mortgage and other payment holidays, while bans on evictions provide some limited security for tenants. Over time many of these additional protections will cease. Indeed, conditionality has already been reintroduced in England, Wales and Scotland.

Secondly, our special issue on attitudes to welfare also flagged the persistence and deeply rooted divisions consistently drawn between those deemed deserving and undeserving of state social security support. These divisions inform policy-making responses, and also shape how claimants themselves experience and engage with social security. Looking at the current context, it is vital to closely monitor the identities and deemed worthiness (or otherwise) both taken by and ascribed to those receiving new or continued support. It would seem already that there have been some fresh (in being new to this context) and yet very tired (in following on longstanding dichotomies) divisions being drawn here. Those who have suffered an immediate income shock and become poor because of the pandemic are deserving; they were hard-working families, doing the right thing, before the pandemic hit. Those who were already on benefits, already part of the jobseeking population at the start of lockdown are seen as less deserving by contrast.

As furlough winds down, will those unable to return to work because of health vulnerabilities be the focus of new narratives, further redrawing boundaries between deserving and undeserving populations? And will those who struggle to find jobs when furlough becomes redundancy becomes benefit reliance be subsumed into the ranks of welfare dependants, or sustain their ranks within the deserving populations? It will perhaps be of little surprise if new recipients themselves engage in processes of ‘othering’, juxtaposing their own support (short-term, crisis-driven, deserved) with that provided to existing populations (long-term, welfare-dependent, undeserved). In the continuing debate around intergenerational fairness, will public attitudes to retired populations – a group broadly spared the brunt of COVID-19’s financial impact – harden?

Thirdly, evidence from examination of public attitudes over time show that there is persistently more support for some forms of public spending than for others. Historically, health is overwhelmingly the most popular area, with education and pensions also typically high on the list of priorities. Outpourings of support for the NHS – window displays, social media posts and claps for carers – look set to consolidate further public backing for healthcare as the jewel in the welfare state. Approval of working-age cash benefits, particularly for the unemployed, has tended to be lower. One important exception has been around family or child benefits, where support appears to have considerably increased over recent decades. Will this trend continue? Footballer Marcus Rashford’s campaign on child poverty received widespread political and public support for a short-term fix, and led to a high-profile U-turn by Boris Johnson.

Future British social attitude surveys will reveal any changes to the perception of the generosity of welfare benefits, personal responsibility and deservingness. It is a moot point how much these attitudes will matter in reshaping policy. Public attitudes to ‘welfare’ display much ambivalence and the direction of policy is often only loosely shaped by public debate. While attitudes can shift rapidly in response to events and circumstances, deeper societal values and cultural beliefs are typically slower to move and more resistant to change. We believe it is also crucial to ‘track and trace’ how elite attitudes are themselves changed by experiences of lockdown and COVID-19.

We have suggested three areas to monitor in terms of shifting attitudes to welfare during this new and – as we are all now surely tired of hearing – unprecedented times. We share a hope that the UK will indeed #buildbackbetter, and that there will be a renewed understanding among members of the public of the importance of decent, poverty-preventing social security provision. We also think it’s vital, however, to remember that politicians make policies, not the public. And here there needs to be more focus not just on public attitudes, but on the attitudes and practices of elites. On social security and welfare, attitudes will likely always be contested, complex and ambivalent. What is needed, now more than ever, is political leadership, and a readiness to make the case for a well-funded social security system that protects us all.

Thanks to Emma Wincup (one of the editors of the special issue) from the Joseph Rowntree Foundation for her valuable contribution to discussions which informed this blog. 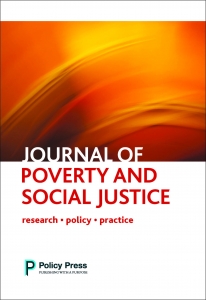 This article draws on the welfare attitudes special issue of the Journal of Poverty and Social Justice. The following articles have been made free to access until the 31 July:

Living with and responding to the ‘scrounger’ narrative in the UK: exploring everyday strategies of acceptance, resistance and deflection by Ruth Patrick