Taking back control of our technology

Look back a decade, and the political horizon of social media looked very different than it does today. Critiques of the increasing dominance of corporate social media platforms were overshadowed in the past by an enthusiasm for what social media were seemingly making possible. In his book Why It’s Kicking off Everywhere, Paul Mason was able to quote an activist involved in the Arab Spring saying that it was a revolution ‘planned on Facebook, organized on Twitter and broadcast to the world via YouTube’.

Similar stories were told, in the contexts of the Occupy and 15-M anti-austerity protests in Spain, of social media providing a technological infrastructure that enabled radically democratic and participatory politics. Social media’s architecture of participation bypassed centralised mainstream media and allowed people to speak directly to one another, indicating a realisation of the network potential of the internet. Rather than media communication being limited to top-down broadcast of information from the few to the many (through newspapers, radio and television), everyone could communicate with everyone else, directly and without mediation. For activists, much of this was prefigured in earlier forms of communication, such as email lists, online forums and news sites like Indymedia that were based on user-generated content.

Today, social media embody a far more menacing character for activists than they did a decade ago. Rather than a tool for radical organisational forms, such as participatory democracy and non-hierarchical communication, the very social media platforms that were lauded by activists in the 2011 uprisings – Facebook, Twitter and YouTube – have been implicated in the rise of the fascist alt-right and the election of right-wing populists around the world.

The Cambridge Analytica scandal revealed how the data that social media platforms collected about users have made political propaganda more effective than ever before. Data about users’ behaviour on Facebook, for instance, meant that political advertising could be tailored to include hooks that specific segments of the population were known to be susceptible to. Such advertising is much harder to regulate than traditional political communication produced at elections, both in terms of its content and the amount spent on it.

This use of social media – to manipulate voters by exploiting their fears rather than convincing them of particular manifestos or political positions – has been identified by journalists and scholars as contributing to the result of the Brexit referendum and Trump’s election in 2016 through to the 2019 UK General Election. Similarly, YouTube has become home to a host of alt-right personalities who have normalised racist, sexist and transphobic discourse. Platforms like Twitter and Facebook have also been happy to provide soapboxes to right-wing conspiracy theorists because they bring them so much traffic and, therefore, advertising revenue. Facebook has also come under fire for workplace sexism, and its origins lie in the practice of male students ranking female students on their attractiveness.

Just a few weeks ago, Facebook deleted the accounts of several high-profile anarchist publishers, lumping them together with right-wing QAnon groups and charging them with inciting violence. On the streets it is often anarchists and other anti-fascists who are in the front lines defending communities against the violence perpetrated by right-wing groups and law enforcement. Militias linked to recent murders in the US are still at liberty to mobilise on Facebook.

Looking at how the use of social media has changed in a decade, from a promised facilitator of radical left-wing forms of organisation to an enabler of the far right, one has to wonder whether this has in fact always been the purpose of mainstream social media. While platforms like Facebook and Twitter have at times wrapped themselves in progressive, even radical, cloth, much of how they have developed has taken them on a linear trajectory towards providing a fertile breeding ground for the resurgence of right-wing populism. Indeed, it is their participatory nature, framing the user as a producer of content, that allows for the harvesting of so much big data that makes manipulation possible. Was this always the point of social media? Were they always intended to capture and bend populations to the wills of corporate and political authorities? Were we wrong to ever think they could help bring about a more democratic world?

To ask these questions is not to invite conspiracy theories about secret rulers of the world, but acknowledges instead that these platforms were born within the structures of corporate capitalism and states that are far less democratic than they might admit, and that these structures have their roots in colonialism, white supremacy and patriarchy. In this context, mainstream social media, much like the mainstream media more generally, function to reinforce a particular status quo and their behaviour will always be inflected by this. As Audre Lorde put it, ‘the master’s tools will never dismantle the master’s house’.

Does this mean that we should abandon mainstream social media platforms? For those of us not banned already, do we really have a choice? While there has been a range of alternative social media platforms (some specifically designed to support radical political activism), none have ever come anywhere close to the mainstream giants in terms of numbers of users. When connecting people in networks is the name of the game, small user communities severely limit alternative platforms’ usefulness and attractiveness.

This is perhaps the paradox of social media: we can’t continue using them, because they seem so inherently biased towards the worst kinds of politics; we can’t stop using them because there isn’t anything else and we need to stay connected. However we respond, be that on the terrain of mainstream platforms or in the development of alternatives, it is clear that things have to change. Social media, at the most basic level of the infrastructure rather than the specific corporate realisations of that infrastructure, might still hold the key to participatory and democratic organisation. Combined with offline organisation, they have been vital to many of the mutual aid responses to the coronavirus pandemic. Whatever path is taken, it is clear that users need to be put back at the centre of social media, not just as sources of data and advertising revenue and as subjects of manipulation but as those who are collectively in charge of how platforms function. We need to take back control of our technology. 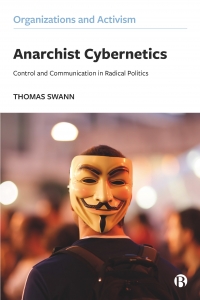 Anarchist Cybernetics: Control and Communication in Radical Politics by Thomas Swann is available on the Bristol University Press website. Pre-order the hardback here for £60.00, or the EPUB for £21.59.

Our newsletter subscribers receive a 35% discount – sign up here. Please note that only one discount code can be used at a time.