The impact of the COVID-19 epidemic in Italy

When COVID-19 broke out in March 2020, Italy had not yet fully recovered from the 2008 economic crisis. The long lockdown put a halt to all economic activities, except for a small number of ‘essential’ ones, thereby hitting a country that was already experiencing comparatively high rates of unemployment, temporary work and poverty.

Following the lockdown, which lasted over two months, different income protection measures were implemented to support those workers who could not work from home. The Wage Guarantee Fund, which usually protects the income of employees of medium–large enterprises, was extended to those working in small enterprises, and the same occurred with other protection funds. Self-employed workers, traditionally not covered by unemployment benefit nor by any protection fund, received a one-off, if small (€600) lump sum. Despite the implementation of these extraordinary financial measures, because of the high fragmentation of job positions with different kinds and degrees of social security coverage, or not at all, and the large number of irregular workers in the Italian economy, particularly in the south, a large share of workers nevertheless remained unprotected.

Overall, the consequences of the epidemic have exacerbated inequality and poverty in Italy, while exposing social groups that were thought to be protected from the risk or actual experience of severe poverty: shopkeepers, workers in restaurants and cafés, employees of NGOs and social cooperatives, cleaners and family caregivers (badanti) and the like. NGO services such as food banks, meal-delivery services and drop-in cafeterias have seen their client numbers swell and their social composition change dramatically, to include lower/middle-class households that have been financially overwhelmed by the epidemic. As was the case during the 2008 crisis, the young have been hit particularly hard, whether they had temporary jobs that have not been renewed or were just about to enter the labour market.

The epidemic has worsened the condition of poor children. The closing of schools and the uneven introduction of ‘schooling at a distance’ was particularly difficult for children from poor and even modest-income households. According to the latest data (2018–19), about 14 per cent of households with children have no access to computers or tablets, a figure which increases to more than 20 per cent in southern regions and is particularly high in poor households. For these children, gaining access to online teaching or performing tasks allocated via electronic means was almost impossible, preventing them from continuing with school programmes. The epidemic is definitely demonstrating the depth of the digital divide in Italy, digging an even deeper cleft between disadvantaged households and the rest. But it is not just a question of educational opportunities. According to Istat data, since 41 per cent of children are living in cramped housing, the compulsory ‘stay at home’ mandate has been particularly hard for them.

Data suggest that the epidemic will also increase gender inequalities, in both the labour market and in the household, for two main reasons. First, women are more frequently employed in the service sector (83.5 per cent, a quarter of which are in tourism and restaurants) than men (55.6 per cent). They therefore experience a higher risk of losing their jobs or of having their working hours and wages reduced. Second, the closing of all schools, childcare settings and education services until at least September 2020 has rendered it more difficult, if not impossible, for many parents to reconcile work and family requirements, with the burden of childcare falling predominantly on women. Resignation is higher among women in lower-skilled manual jobs that cannot be performed at a distance. Thus, their households also run the higher risk of becoming single-earner households, the kind of household that is particularly vulnerable to poverty.

Countless support initiatives have been developed by third sector organisations and civic associations, both to mitigate the impact of the crisis on the poor and to focus the government’s attention on the plight of the most vulnerable sections of the population, including undocumented migrants. But the depth of the crisis and the sluggish recovery by crucial sectors of the Italian economy (e.g. tourism) because of the persistence of the epidemic in other parts of the world suggest that revival will be slow and uneven. Currently the forecasts for Italy from the main financial institutions are very negative, with a decrease of GDP estimated at 11.2 per cent in 2020, the largest in Europe, and an increase of unemployment by 11.8 per cent. Experts also expect only a 6.1 per cent growth of GDP in 2021, well below what would be needed to cancel out the 2020 decrease (see EU Economic Forecast, Spring and Summer 2020). It is, therefore, very likely that the negative effects of the epidemic on inequality and poverty will last for a while. Their length and degree will largely depend on whether, when and to what extent the economy will pick up after the severe plunge it experienced during two months of an almost total freeze on work, and on the political and policy choices made to buffer its consequences.

The recent agreement on the EU Recovery Fund that will provide a huge amount of money to Italy in the next years to face the effects of the epidemic is a historic chance to nudge the country towards a more equal and inclusive society. The hope is that the political class will live up to this challenge.

Chiara Saraceno, former Professor at the University of Turin and at the Institute for Social Research in Berlin, is presently Honorary Fellow at the Collegio Carlo Alberto, Turin.

David Benassi is Associate Professor at the University of Milano-Bicocca and Director of the Planning and Management of Social Policies and Services masters programme.

Enrica Morlicchio is Full Professor of Economic Sociology at the Federico II University of Naples. She is editor of the Journal Sociologia del Lavoro. 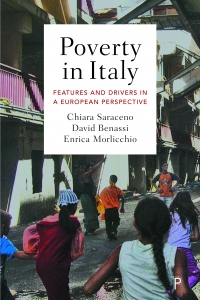 Poverty in Italy by Chiara Saraceno, David Benassi and Enrica Morlicchio is available on the Policy Press website. Pre-order the Hardback here for £60.00 or the EPUB for £18.39.