What is ecological justice, and why does it matter today?

Ecological justice concerns the view that non-human beings such as animals also have entitlements, for instance to an adequate habitat. While this is a matter of moral philosophical debate, the current COVID-19 pandemic illustrates the need for visions for a just world that situate humans in nature.

Within environmental moral philosophy there are many terms for ecological justice. Most telling is probably interspecies justice. The base idea is that while mainstream Western theories of justice agree that non-human living beings such as animals or plants do not deserve justice, a range of theories have started to challenge this consensus. For instance, I have argued that biodiversity conservation is not only a matter of securing the wellbeing of future human generations, but also a matter of doing justice to non-human living beings. In essence, aiming for (strong) sustainability is not only something that we owe each other as fellow humans but also something we owe other creatures with which we share one planet.

There are, of course, many aspects to this. Let me illustrate one: Distributive justice is frequently exemplified as the puzzle of how to share a cake justly. Assuming that everyone likes cake, and everyone is hungry, we encounter questions regarding who has claims towards that cake (in the global context, that is everyone) and how we should distribute the cake (in our case, environmental resources etc.) between these people. For example, should everyone get an equal slice, or should we rather distribute according to how hungry people are? What if we do not have enough cake to satisfy everyone? That are questions that different theories of distributive justice address. Accounts of (distributive) ecological justice further complicate this picture by arguing that not only humans but also (some) non-human beings have a claim to the ‘Earth cake’ (the ‘who question’) which also has an impact on how we answer the ‘how question’. In practice, that requires considerably more extensive biodiversity conservation efforts than we are seeing internationally today.

Now, one might reasonably ask why that is supposed to matter. After all, in the current socioeconomic context – a global society more and more characterised by injustices of all kinds, human suffering and uncertainties about the future brought on by a multitude of crises – many people might think that theorising about justice to non-human beings might be an interesting intellectual exercise at best, but essentially ‘ivory tower’ philosophy. Indeed, these considerations are abstract and often far away from everyday lives. But they are also part of visions of a just world – realistic visions that point towards alternative possibilities that address these problems that can motivate some of us. I only want to suggest that this should include debates about just nature conservation that take the needs of non-human beings seriously. That also applies to very immediate problems faced today, which are easier to grasp than often-abstract concerns about the extinction crisis. For instance, while the extinction crisis and climate change are two major environmental challenges of our time, it is the case that the news cycle this year has been dominated by stories about the COVID-19 pandemic – a much more immediate threat for many people.

The pandemic is, of course, a matter of social justice due to the multitude of adverse consequences for people’s lives exacerbating, in many instances, pre-existing forms of marginalisation and disadvantage, such as different forms of pollution. These are structural injustices which have been observed for instance in the US where communities of colour and low-income communities are disproportionally adversely affected by the pandemic. Such aspects of this health crisis deserve much more attention.

What I would like to highlight is that the current pandemic also constitutes an environmental challenge. The so-called coronavirus is a zoonotic disease, which means that it resulted from the transfer of a pathogen from a non-human host onto humans. That points to an important link between human-caused environmental degradation and the outbreak of such diseases. As put recently in an IPBES expert guest article:

Rampant deforestation, uncontrolled expansion of agriculture, intensive farming, mining and infrastructure development, as well as the exploitation of wild species have created a ‘perfect storm’ for the spillover of diseases from wildlife to people. This often occurs in areas where communities live that are most vulnerable to infectious diseases.

In essence, disease transmission – some of which might be even more devastating than the current pandemic – is one of several reasons why we should be very serious about biodiversity conservation, and the link between intensive animal farming methods, transmission of diseases and ecological justice has of course been made.

But non-human beings should not only be construed as potential transmitters of disease or resources to be exploited in the meantime; rather they matter in themselves as recipients of justice. Because human global activities that are driving the transmission of zoonotic disease are also constantly leading to smaller and more fragmented habitats for non-human beings, we should also be concerned about their direct effects on non-human lives. Giving non-humans their space alongside ourselves by means of habitat protection appropriate to different contexts needs to be a higher priority. This is exemplified by the current rate of species extinctions – each human-caused extinction a ‘memorial for past injustices’ to non-human beings.

The realisation that the extinction crisis is a problem is reaching more and more people, thanks in part to David Attenborough’s latest BBC programme on extinction, highlighting the fragility of life on Earth and the urgent need for socioeconomic change. To be clear, it is not my intention by any means to play off the injustices against human and non-human beings against each other. On the contrary, taking social and ecological justice seriously asks us to think about what a better future would look like. Giving non-human beings their space is a matter of justice. So, my approach to environmental ethics, while abstract, is meant as a suggestion for a way of thinking about environmental problems for everyone who is committed (or at least open) to both: global justice to humans and non-humans alike.

Anna Wienhues is a postdoctoral researcher at the Center for Ethics, and the University Research Priority Programme on Global Change and Biodiversity, at the University of Zurich. Her work focuses on environmental ethics and political theory. 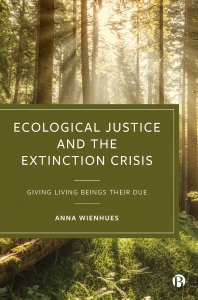 Ecological Justice and the Extinction Crisis: Giving Living Beings their Due by Anna Wienhues is available on the Bristol University Press website. Pre-order the hardback here for £60.00, or the EPUB for £21.59.