“Come on! Now beer is racist?” Well, yes and no

The consequences of race and racism are all around us, but may be invisible to those who benefit from such a system. As sociologists, we are trained to make the familiar strange, to see behind the veil. It is through this lens that we can critically analyse those cultural products that are so commonplace that we rarely pay attention to them, but that fundamentally come to define who we are.

Today, amid increasing social unrest and a global pandemic, a variety of movements are afoot in the United States. While the motivations of these may differ, the collective desires are quite similar. These movements seek to illuminate social injustices – more specifically, racial injustices – across almost every domain of life. They have forced us to have often-difficult discussions about race and racism. Some are race-conscious; the majority are plagued by colour-blindness. Why not have these important discussions over a beer, or better yet, a conversation about beer while sharing a beer? As we move to a more equitable and just society, we must also begin to question the racialised processes and structures that produce the everyday goods we consume.

The beer industry has recognised it has a race and diversity problem. Indeed, it always has, since its (and America’s) founding. It has also acknowledged its ignorance of how to even think about, let alone ‘fix’ the problem. Over several years, the craft beer industry has shown gradual signs of reckoning with its racism, and perhaps is working to ‘solve’ it. This could not have happened without the realities of the movements that are also afoot to celebrate the diverse reality that is beer in the 21st century. Fresh Fest, the first (and only) Black brew festival showcases Black and Brown brewers from across the US, while bringing together craft beer lovers over hip hop and beer. The Brewers Association appointed a Diversity Ambassador to work with industry insiders and brewers to increase diversity. Strong social media influencers such as Ale Sharpton and Afro Beer Chick are taking beer into communities – even barbershops – to share their enthusiasm. Entrepreneurs and brewers Crowns and Hops are creating their own brands to celebrate their culture and love of beer. Celebrations of indigenous women (Bow and Arrow in Albuquerque) and Latinx (5 Rabbits Cerveceria in Chicago) brewers, and the building of a funding network to encourage brewery ownership in communities are just some of the ways these movements are creating change in the industry. While there has always been a lot to be excited about, particularly the craft beer revolution in the US, we are bearing witness to movements that celebrate the promise of diversity in the American beer industry. But, given the long history of race and racism, one might ask: why now?

A new narrative, collecting the stories of lovers of craft beer, its brewing and its culture, is forming a new chapter in the history of beer, and therefore, its future. Since the founding of the United States, through a variety of homebrewing traditions, through Prohibition, through the craft beer revolution, beer (its brewing, its distribution, its marketing and its consumption) has always been, and continues to be white and wrapped up in the (re)production of whiteness. As two sociologists with a deep love of craft beer and its scenes, we became critical of this and curious about the phenomenon. We quickly realised after just a cursory dig into the literature on beer and brewing and through conversations with brewers, beer reps and others that there was so much more to the history, stories and structures of beer in the US. The #newnarrative was both a challenge to the contemporary reality of beer, as well as a call to reclaim the realities and stories that have been lost, marginalised or actively hidden by the whiteness of beer.

This is why Beer and Racism: How Beer Became White, Why It Matters, and the Movements to Change It came about. We set out to understand how we got to a place where a beverage made of water, grain, yeast and hops seemed to be so linked to whiteness in almost every way – historically, socially, culturally, economically. Indeed, this contemporary reality has led craft beer journalists and enthusiasts such as Dave Infante to ask why Black people don’t drink craft beer. And yet, they do! But, the realities that raised such a question are much more complex, and the complexity is fundamentally rooted in race and racism. Was the link between beer and racism evident from the early foundations of the settler colonies that would became the US? Did beer, brewing and its consumption lay the footings for the current context of the craft beer revolution? As an example of our research discoveries, in the wake of the repeal of Prohibition, the three-tier distribution system was established to allow states to produce, distribute and tax alcohol as they saw fit. Consequently, each tier represented access to beer. In the Jim Crow era, the three-tier system effectively operated as a gatekeeping mechanism. Industry insiders, brewers and wholesalers could decide who became a brewer, a distributor or a consumer of craft beer. These pathways into beer are crucial to gaining equal access and opportunity in the industry, and to creating marketing and advertising campaigns that dismiss and deconstruct previously held stereotypes about Black and Brown consumers. Interviews with brewers, owners, sales representatives, social media influencers and other industry insiders, many from marginalised groups within the beer industry as well as society at large, as well as the historical, sociological and popular literature on beer, have led us to centrally question of whether these paths are open to all. Beer and Racism, we hope, will help us understand the foundations of beer’s whiteness.

The racialised social structure of the US has distributed opportunities differentially since the founding of the country to those deemed as ‘other’ and non-White. This structure has been upheld by alliance to whiteness as a normative structure, as an ideology, as a set of practices, tastes, categorisations and assumptions. In reaction to the pre-release social media promoting our book, the defenders of beer – White men – shouted: “Beer is racist? What’s next?”. While this type of reaction – and indeed, the more explicit and overtly racist comments from others – is typical, there has also been a groundswell of positive support from individuals and groups within the craft beer industry and culture. Given what we learned writing this book, some of these negative reactions are not only unsurprising, but are also extremely misguided, not informed by the real story of beer, the realities of whiteness and the real history of the US. Of course beer isn’t racist, that is silly; but beer – the cultural, social, economic, political object that it is and has been used as throughout its history, certainly in the US (but also elsewhere) – excludes, erases, vilifies and further marginalises racialised social groups, while providing inclusive international, social and cultural spaces and places for white sociability.

Beer and Racism does not and cannot offer the complete solution to solving systemic racism in the beer industry. It is, however, an attempt to bring conversations about race to the forefront, to understand the future of craft beer and to grapple with its real past. We hope it will help amplify the important (and very difficult and challenging) work of those who are continuing to break barriers, and also provide critical context to the ongoing conversation of beer and racism – an important conversation that matters.

Nathaniel G. Chapman is Assistant Professor of Sociology in the Department of Behavioural Sciences at Arkansas Tech University. 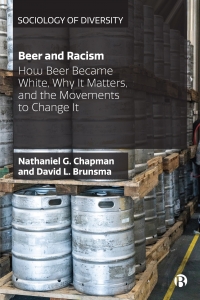 Beer and Racism: How Beer Became White, Why It Matters, and the Movements to Change It by Nathaniel Chapman and David Brunsma is available on the Bristol University Press website. Order here for £18.39.