“I just don’t like moving all the time”: Growing up with housing insecurity in England

This article is based on the Moving, Always Moving report from The Children’s Society, about the normalisation of housing insecurity among children in low income households in England, out today.

This is the latest publication from The Children’s Society’s study ‘Understanding Childhoods: Growing up in hard times’. It is testament to the value of listening to children and placing their voices at the heart of social research.

Anthropologist Nancy Scheper-Hughes once likened the world’s vulnerable children to the caged canaries of the Kentucky coal mines, whose song or silence would indicate to the miners the relative safety or danger of new mines. Learning about the lives of marginalised children can, Scheper-Hughes argues, teach us about the ‘safety’ or ‘danger’ – the success or failure – of the political and economic systems in which these lives are nested, about the adequacy of the policies that uphold those systems and about where public money and attention should be focused.

For three years, researchers at The Children’s Society and the University of Bath studied 60 children living in poverty in England, as part of the qualitative, longitudinal research project Understanding Childhoods: Growing up in Hard Times. Returning each year to catch up on the latest developments in young people’s lives, we followed the hopes, dreams, worries and joys of girls and boys in rural, small and large city locations, as they navigated their way through their formative years in conditions of relative material scarcity. While we conducted this research before COVID-19 took hold, the findings are relevant now more than ever, as the country tries to rebuild itself in the wake of the pandemic and its economic fallout.

What did we learn from the young people who shared their stories with us? What can their songs or silence tell us about the success or failure of the systems and policies that shape their lives? And what might the learning be for policy makers, as they navigate a way through, and hopefully out of, the current crisis?

In broad terms, we learned a lot – about young people’s experiences of relationships, school, neighbourhoods, hobbies, money and material possessions, and about the routines of daily life when there is little money to go around. And we expected to learn about these things because we asked about them. Mostly we were reminded of the tenacity of hope and the extraordinary lengths that young people and their families go to, in staking a claim to the normalcies of childhood when the odds are stacked against them. We were reminded that the systems and policies surrounding children in poverty are multifaceted and multilayered, and that they are failing on a number of fronts.

But one of the most exciting aspects of doing qualitative, longitudinal research is the opportunity it affords not only to seek answers to predetermined questions, but to explore the unforeseen, to follow leads from participants as they surface and to investigate issues that we did not expect to encounter.

We never intended to study housing insecurity – the phenomenon of frequent, forced moves driven by poverty (often coupled with other stressful circumstances and characterised by short-term tenancies, lack of housing affordability, eviction and ‘unelected fixity’). In fact, we tried not to engage with it at all, because a transient research sample can easily shrink beyond viability, as participants move, become untraceable and drop out of a study altogether. But, despite our attempts to preclude it from our research, housing insecurity emerged as a steadfast feature on the landscape of many participants’ lives.

The first interview I did for Understanding Childhoods was with a boy we shall call Omar. He was 11 in the first wave of the project, and I started the interview by asking him where he lived. A simple enough warm-up question, I thought. He gave the name of his current neighbourhood, then said he hadn’t lived there long, and what followed was a confusing and elaborate account of many neighbourhoods, many houses, many moves, many reasons for moving. He spoke about rat infestations, eviction and staying with his grandmother when the family had nowhere else to go. He talked about moving between neighbouring areas, between opposite ends of the city and from one city to another, and I struggled to keep up with the twists and turns in his tale. I tried to draw it all out on a timeline, but ended up with a sheet of flip chart paper covered with awkward scrawls of confusion. Omar said: “I just don’t like moving all the time, it’s so annoying… you have to keep packing your bags, carrying heavy bags, putting them in a van, driving and going back and getting more bags”.

At first I thought Omar’s story would be a one-off (hadn’t we requested no transient children from our gatekeeper schools?), and when similar stories emerged in my next two interviews, I assumed this was a reflection of the large city location where I was conducting fieldwork, where residential ‘churn’ was probably more prevalent. But when I checked with colleagues conducting fieldwork in the small city and rural settings, housing insecurity was there too. By the end of the study, over a third of our sample – 24 out of 60 young people – had experienced housing insecurity at some point in their lives.

What we learned about housing insecurity was that while some young people growing up with no ‘permanent state of home’ (as one participant put it) seem to take it in their stride, it can take its toll on children and their families. It can be expensive, it can be time-consuming and it can drive a wedge between members of a household. It can remove young people from the things that prop them up – a familiar neighbourhood and close friends, and the sense of belonging and safety these hold. It can damage a young person’s social status, through the judgements that get cast on those whose housing circumstances expose poverty and the latter’s stranglehold on choice. And it can play havoc with a young person’s emotions, as cycles of anxiety, hope and disappointment ensue, and the uncertainty of life lived in limbo is felt in full. We learned too of the far-from-passive responses that young people had to their circumstances, carving out supportive relationships in new neighbourhoods, staying at schools far from new places of residence, and trying to make those dwellings resemble ‘home’ in the emotional as well as the physical sense of the word. We learned that once settled, children gain a lot. As one 14-year-old girl, Madison, put it when she reflected on what it was like to have stopped moving (after her tenth move):

“Well I would never actually get attached to anyone or anything in the area because I was just so used to leaving, so… I feel like I’ve managed to get to know people a lot better, like let myself get to know them and like let them know me. I would go out more and I just feel like it’s helped me, like, mentally if that makes sense, you know. I don’t have to keep trying to make new friends or anything, so it’s made me better.”

We also learned of the ways that housing insecurity can so easily become normalised, as young people know no different, invoke it as the norm in order to stave off the stigma it carries, and grow up with a sense of ‘transient’ being who they are.

What does all of this say about the systems and policies surrounding children living in insecure housing? It says they are failing. And the learning for decision makers who are responsible for recreating the policy landscape in the wake of COVID-19 is this: if we want to give transient children a fighting chance at flourishing in life, then the complex policy landscape that surrounds them will need to be developed with people like Madison and Omar at the forefront of the mind. There is no quick fix. But we can send people to the moon. We split the atom. We teeter on the edge of finding a vaccine for one of the most virulent viruses the world has seen in a long time. Surely, surely, as we set about rebuilding our society after COVID-19, we can find a way to provide stable, secure homes – a basic necessity – for children who do not have them.

Dr Sorcha Mahony, Sorcha Mahony is a senior researcher at The Children’s Society and leads a unique research programme on the experiences of young people growing up in poverty. 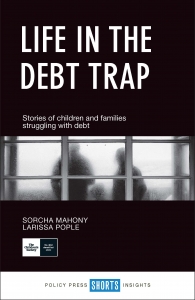 Life in the Debt Trap: Stories of Children and Families Struggling with Debt by Sorcha Mahony and Larissa Pople is available on the Policy Press website. Order here for £8.79.