COVID-19 has disrupted many things during 2020, not least our sense of place. Some places have taken on new significance, from Wuhan to care homes; others have become unexpectedly visible as national and local lockdowns are announced; while yet other places, like Barnard Castle, acquire new notoriety as the setting for unexpected eye tests.

The pandemic has underscored our global spatial interconnectedness: in transmission flows; in the desire for, and attempted control of, international movement; and in the possibilities and limitations of international solidarities. Most strikingly perhaps, the pandemic has both followed the contours of spatial inequalities and acted to deepen them. This has been true globally, nationally and locally as infection and death rates have tracked all too well-known economic and social divisions, concentrating on the poorest, the most vulnerable and, not least, those racialised and minoritised groups now officially and uncomfortably branded in the UK as BAME (Black, Asian and Minority Ethnic).

Perhaps nowhere has been such a focus of pandemic turbulence as the home, at least for those who have one. Lockdowns in the UK drove people back into their homes in fierce ways, intensifying the juxtaposition of private and public space, making them a site for home working and home schooling, and marking a place whose borders had to be negotiated with careful attention – from doorstep deliveries to neighbourhood solidarities, or from being urged to ‘snitch’ on rule-breaking neighbours to the terrors of isolation and abandonment. A critical, though too rarely asked, question, is what sort of home is this? The splendour of a multi-roomed home with access to plentiful external space in which to meet family and friends has underpinned a very different pandemic experience from the tiny and overcrowded flat or terraced house with little or no outside space. But both home working and home schooling have been promoted as key activities as if the home in question denotes the same sort of space.

These physical inequalities intersect with other dynamics. For some, the home has been a sanctuary, a place in which to retreat from the threats and dangers of the world outside. For others, it has been an overcrowded and confining space, often less cut off from the world as key workers enter and exit on their way to and from dangerous places (from meat-processing plants to COVID-19 wards). Such spaces do not offer the luxury of a ‘quiet corner’ in which schoolwork or home working might be undertaken (even if the technological connections and equipment exist). Meanwhile, homes of whatever size have also proved to be prisons, rather than sanctuaries, trapping people in abusive spaces with less and less public support or chances of escape.

The demands of home working and home schooling have remade the home. For home workers, the liberation from the office (and the commute) has been overlaid by the technological reach of managerial surveillance and scrutiny – as your home becomes a space to be overseen by others and in which your computer stands prepared to snitch on you for slacking. In different ways, the shift to home schooling has divided parents into either enthusiasts – ‘we can’t believe we didn’t do this before’ – or new-found fans of teachers – ‘who knew it was so hard?’

And then there are those spaces that we describe as homes: care homes that so cruelly turned out to be the sites of confinement, isolation and transmission. Who could have guessed that putting significant numbers of vulnerable people together in a confined space (without testing or PPE) would prove to be risky? Certainly not my government, who thought ‘decanting’ older people to care homes without testing would protect the NHS. Care homes – and not just those for the elderly – have been the most visible example, but putting numbers of people together in confined spaces is a recurring problem: prisons, internment camps for migrants, schools and universities have all generated predictable ‘hot spots’ (as did Italian ski resorts in an earlier phase).

Overall though, what has struck me most about the public conversations about place and the pandemic is the oscillation between optimism and pessimism. For many, the pandemic has produced signs of hope: experiences of mutual support, solidarity and action have reminded us of the well springs of cooperation and collective mobilisation that could make other futures possible. At the same time, we have confronted the privatised, anti-social, crisis-ridden and chaotic national disorder that is proclaimed as ‘world beating’. Those conditions have been an equally fertile ground for pessimism. In the spaces between optimism and pessimism we might glimpse the landscapes of our battles to come over the shape and direction of the future. In them, we might manage to create what the late Doreen Massey called ‘geographies of responsibility’, recognising and building on the relationships that connect and shape places.

John Clarke is Professor Emeritus in the Faculty of Arts and Social Sciences at the Open University. His work stretches across cultural studies, anthropology and policy studies. 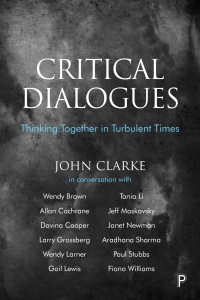 Critical Dialogues: Thinking Together in Turbulent Times by John Clarke is available on the Bristol University Press website. Order here for £19.99.