COVID-19 and the precarity of Romani lives: a renewed call for a Social Europe

“I am a Sinto, the son of a Holocaust survivor who lost six aunts and uncles in the Holocaust. I know how racism feels and I don’t want anyone to endure what my people and I have to endure on a daily basis … We not only have COVID-19 in Europe, but a pandemic that is older and even more dangerous – RACISM! Are we finally prepared to confront this reality and correct this injustice?” Romeo Franz, MEP from Germany, Greens/EFA, Brussels, 9 July 2020 (excerpt from Romani Communities and Transformative Change: A New Social Europe)

As the COVID-19 pandemic accentuates fundamental structural problems within our globalised society, throwing into sharp relief the dangers of authoritarianism, racism and inequality, it also brutally exposes the fragility and precarity of life at the margins, including for many Romani families across Europe. COVID-19 has exacerbated the marginalisation of Roma: the lockdowns have left those dependent on casual work and the informal economy without an income, with limited access to bank accounts or their savings, and with little or no emergency welfare support coming from the state. A poor health profile, often resulting from a lack of basic infrastructure such as potable water, leads to chronic debilitating pre-existing conditions; this, coupled with substandard living conditions in rural settlements and overcrowded tenement housing, leave many Roma vulnerable to this unpredictable virus.

Moreover, moral panics spearheaded by xenophobic politicians and media hysteria (amplified by social media ‘fake news’) centred on Romani communities in European countries as diverse as Spain, Bulgaria, Romania and Slovakia, have fuelled claims that they are the principal carriers of the virus.

In this manner, the pandemic highlights the corrosive nature and reach of antigypsyism in Europe, as well as how the state and a broad spectrum of political actors can orchestrate anti-Romani sentiments. What makes antigypsyism a special form of racism in Europe today is the involvement of the state in the production and co-production of these discriminatory norms, knowledge and politics in relation to Romani communities.

In Bulgaria, for instance, some politicians and media outlets have referred to Roma people as ‘a threat to public health’ and requested special measures to target them. Local authorities in several EU member states have set up draconian police checkpoints around Roma settlements to enforce quarantine measures and, in one place, a fence was erected around a Roma settlement, on the pretext of public health and safety, to better control movements. Such actions were redolent of earlier (often recurring) anti-Roma racist measures in Europe generated by moral panics. For example, during the time of Romani slavery in Romania, enslaved (and semi-itinerant) Roma were forbidden from entering Bucharest during outbreaks of the plague. Then, in the 1940s, eugenicist fears that Roma would contaminate the ‘Romanian race’ with typhus led to stringent anti-Roma measures. Indeed, the problem of increasing police violence as another aspect of growing anti-Romani racism during COVID-19 has been discussed by Bernard Rorke of the ERRC who pushes for ‘extra vigilance to protect the human rights of racialised minorities when governments adopt emergency powers’.

The COVID-19 pandemic and the economic crisis it has induced necessitate major acts of economic intervention and stimulus. Public support for transformative change is far greater than some European leaders assume, thus the pandemic presents not only a danger, but an opportunity to transform the societies we live in so that European Roma no longer suffer marginality and demonisation. As Matache and Bhabha (2020) emphasise:

Like other racialized and marginalized communities, Roma need humane and protective measures. These must recognize their structural inequalities and be tailored to the specificities of their racialized vulnerability—access to water, community facilities, health care assistance, direct cash payments, and income supplements to counterbalance inevitable drop offs in daily wage labor. With 80% of European Union’s Roma living below the poverty line, 30% with no running water, and 46% without an indoor toilet or shower, access to non-discriminatory and high-quality care is critical for their health and well-being.

The contributors to our policy short Romani Communities and Transformative Change: A New Social Europe believe a new Social Europe is a promising path forward especially when evidence suggests that COVID-19 affects the Roma to a greater extent than others. The concept of a Social Europe dates back to the 1970s and is centred on wealth redistribution, social and economic planning and regulation, improved working and living conditions, a guarantee of the right to work, upward harmonisation of European social regimes, and access to social protection for all.

Our challenge is to update the concept of Social Europe and engage in forms of collective action that facilitate inclusive community development, by harnessing the existing resources and skills of those at the margins. We argue that sustainable community organising (centred on constituency-building within Romani communities) and a vibrant civil society for all minorities and interests is a prerequisite to ensuring that macro-level policies are relevant to addressing the needs of local communities. These would in turn form the basis for challenging oppressive forms of ideology and practice by recentring power within European Romani communities.

In July 2020, there was renewed hope for a Social Europe as an EU summit was held to finalise the details of an economic stimulus package to prevent what appeared to be the worst economic crisis since the Great Depression of the 1930s. The finalised Franco-German deal involves a robust €750 billion package and significant financial transfers from the richest countries to the weakest. For the first time, the European Commission will be allowed to borrow large sums on international money markets. What is also significant is that economically dominant Germany, normally allied with the ‘frugals’ (who favour austerity), backed the ‘primers’ this time and opted instead to invest with the aim of stimulating the Eurozone. However, what remains to be seen is to what extent this transfusion of funds will generate the direct cash payments and stimulus packages for those most in need, regardless of ethnicity, as these are determined by EU member states who would then implement their distribution to Romani constituents.

We hope this policy short serves as a toolkit for reflection, training and mobilisation within Romani communities and among their allies. Given the critical challenges Europe faces with the COVID-19 pandemic, a new economic crisis and a widening socio-economic gap for groups like the European Roma, the concept and transformative vision of Social Europe has never been more relevant.

The book will be available to download Open Access on 20 November, and other formats are available to pre-order here. In addition, a recent European Roma Rights Centre article by the editors considers the impact of the US presidential election and the unfolding policies of the European Commission which issued a reinforced and reformed EU Roma strategic framework on 7 October 2020. To attend the upcoming book launch organised by the Heinrich Boell Stiftung in Washington DC, 16 November, 9 am US central time/10 am US eastern time/ 3 pm UK/ 4 pm Central European Time, please register here.

Nidhi Trehan is Affiliated Senior Research Fellow of the CEU’s Romani Studies Programme and Fellow of the Institute of Social Sciences (ISS) in New Delhi. She was formerly Visiting Scholar at the Lyndon B. Johnson School of Public Affairs at The University of Texas at Austin.

Andrew Ryder is Associate Professor at the Institute of Communication and Sociology, Corvinus University of Budapest and board member of the Roma Education Fund.

Marius Taba is Visiting Lecturer and Fellow at Corvinus University of Budapest and former Grants and Research Manager at the Roma Education Fund. 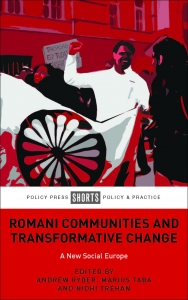 Romani Communities and Transformative Change: A New Social Europe edited by Andrew Ryder, Marius Taba and Nidhi Trehan is available on the Bristol University Press website. Pre-order here for £10.39. If you would like us to contact you when the Open Access version is available, please email millie.prekop@bristol.ac.uk.