We shouldn’t be surprised that Donald Trump has refused to concede to Joe Biden, in spite of losing the electoral college 306 to 232 and losing the popular vote by over 5 million votes. He has been true to his word: Trump had indicated that conceding was never a possibility for months and months before election day.

Even prior to his 2016 election win, he refused to confirm that he would accept the results if he lost. He will likely never concede, fuelling his supporters to believe that he is the only legitimate president. Further complicating matters, his bold and false assertions have yet to be forcefully contradicted by his own party. All of this is unchartered territory for US politics, which relies to a great extent on norms of civility and honour.

Americans are accustomed to having full confidence in the electoral process, in the vote-counting process and rules that govern recounts and disputes. Trump has shattered this confidence, with as many as 70% of Republicans believing that the election was not free and fair. Americans have become accustomed to new terms in the Trump era, like ‘fake news’, ‘deep state’ and now ‘legal votes’. The latter seeds the idea that there are large numbers of illegal votes, despite the US Election Commission’s claim that there is no evidence of fraud or illegal voting. Every legal battle that Trump has pursued has been shut down without merit. To change the result, Trump would need to overturn the results in at least three states, with his best chances being in Arizona, Wisconsin and Georgia. But in contrast to Al Gore’s push to recount the votes in Florida which he ended up losing by a mere 537 votes to George W. Bush in 2000, Trump is down by over 10,000 votes in each state. He may try to push the electors to disregard the popular votes in each state, but that seems unlikely.

Though some Republican leaders are beginning to accept that Trump lost the election, there are serious concerns about what Trump will do in his last weeks in office. For the moment, his scorched-earth policy has led to the firing of his Secretary of Defence, Mark Esper, and other senior defence officials, and his installation of loyalists in their place, causing alarm in the Pentagon for creating chaos and disarray at a pivotal time for US security. Other likely firings may include the director of the FBI, Christopher Wray, the director of the CIA, Gina Haspel, and infectious disease expert Dr Anthony Fauci. Biden is not able to access key documents as Trump’s transition team refuses to greenlight the process.

Though Trump will most likely leave office by January and quickly announce that he is running again in 2024, experts have begun to speculate a wide array of what-ifs: What if Trump refuses to leave office? What if Trump executes a slow-moving coup against the electoral result? What if Trump creates a parallel government using his own right-wing militias to support him? This is all unprecedented in American politics. In countries like Libya which experienced decades of authoritarian rule it is not surprising that there are two governments (in Tobruk and Tripoli) contesting who is legitimately in charge. It is also not surprising to have electoral results questioned in countries which have endured years of dictatorship followed by civil war and instability like Cote d’Ivoire. However, these scenarios would have sounded completely implausible happenings in the US just five years ago.

US democracy is particularly at risk. Millions of Americans (although still only a minority) have reservations about the electoral process, show no tolerance for the other side and as a result are open to non-democratic alternatives. This is what is known as democratic deconsolidation – or a negative shift in the political culture towards authoritarian beliefs and norms. These norms do not appear out of nowhere. Voters often take cues from leaders, and no one has been more vocal in sharing authoritarian norms than Trump himself. Whether it be his open admiration for dictators, or his denigration of those who did not vote for him, his leadership has been dangerous and polarising. We have seen examples of democratic deconsolidation in less stable democracies such as Brazil, Poland, the Philippines, India, Hungary and Turkey, with the latter two now firmly authoritarian. In a noteworthy but controversial article, Roberto Foa and Yascha Mounk claimed that the biggest concern is that younger people in particular are less invested in democracy according to World Values surveys. These alarming trends are due to both polarisation and apathy. There is a total lack of civility and lack of trust in both the political systems and in others.

For US democracy to recover in the post-Trump era, new laws will have to be implemented, such as obliging presidents to release their tax returns, eliminating the electoral college, easing voter registration, making it illegal to gerrymander districts to favour one party, preventing political interference in judicial decisions, relinquishing executive pardon power and outlawing rhetoric that undermines the electoral process. Some of these laws needed to be passed well before Trump entered our political orbit, while some laws are in direct response to his norm-shattering behaviour. It’s not clear, however, that the current lawmakers in the US government have an equal commitment to saving US democracy. If not, Trumpism could have a lasting negative legacy.

Natasha Lindstaedt is Deputy Dean and a Professor in the Department of Government at the University of Essex. She has written widely on authoritarian regimes, democracy, corruption and failed states. 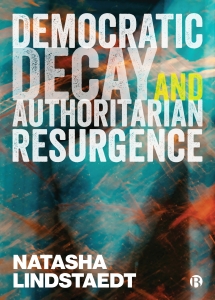 Democratic Decay and Authoritarian Resurgence by Natasha Lindstaedt is available on the Bristol University Press website. Order here for £19.99.