During one of my first research projects in the late 1970s, I was out on patrol with two Strathclyde constables in one of the more deprived South Glasgow housing estates. We drew up alongside a group of half-a-dozen teenagers who were chatting on a wall – doing nothing illegal whatsoever. One of the officers asked them to “move along, lads”, and they grudgingly shuffled off. When I asked him why he had done this, he said, “It’s just what we do”, or words to that effect. This vignette has stuck with me ever since, as it sheds light on the tensions in policing between maintaining control of the streets and acting legally and fairly.

Fast-forward to 2020, and we see through Black Lives Matter in the US and similar protests this side of the Atlantic how unresolved are the tensions between the police and many ethnic minorities across countries in the Global North. BLM erupted in the US in response to a tragic and seemingly unending series of police killings of black suspects. ‘How can American police departments continue to commit such outrages?’ is a question that still demands a cogent answer.

Procedural justice theory – a significant development in criminology – provides a useful set of ideas for explaining both the style of policing that I saw in Glasgow 40 years ago, and the persistence of lethal police brutality deployed in American cities, a disproportionate number of victims being black. The theory offers an explanation of the ways in which consent to the rule of law can be fostered or squandered by police and other agents of criminal justice. The theory’s key organising concepts are threefold:

Procedural justice theory seeks to explain why most of us obey most laws most of the time. The common-sense view is that it is deterrence – the threat of punishment – that keeps us on the straight and narrow. In contrast, procedural justice theory proposes that public trust that the police be respectful and fair in their dealings with citizens creates a sense of legitimacy or moral obligation to obey the police and the law of the land. It stresses the normative factors that shape our behaviour, rather than instrumental, self-interested considerations. If – and it is a big ‘if’ – the police can build a strong enough public sense of their legitimacy, consent to the rule of law will become the norm. If they squander their legitimacy, however, they will find themselves in a position where they constantly need to reassert their control over those they police.

To borrow a term from political science, police are often faced with a choice between using hard power and soft power in their policing styles. Hard power involves the deployment of deterrent strategies and coercive force that keep a tight grip on citizens’ behaviour. Soft power, by contrast, requires approaches to policing that support people’s normative commitment to obey the law. To an extent, the procedural justice approach provides new words with which to reframe an old idea – ‘winning hearts and minds’. But it also offers a detailed account of the sorts of police behaviour that win – or lose – public support. It sets out, in properly evidenced ways, the grammar and syntax of police authority. Whether police treat someone with respect, listen to them and explain why they are doing what they are doing: these all turn out to be much more important than delivering practical outcomes that are in that person’s own interests.

The idea of ‘hard-power traps’ can help explain one way in which policing can go badly wrong. Police can find themselves in a hard-power trap when they have used – or overused – hard power to such an extent that there is no realistic scope for deploying soft-power tactics to motivate consent to the rule of law. When people feel that the treatment they receive from the police is devoid of respect, and that officers are not in any real sense ‘on their side’, the latter may feel that the only policing style left open to them is to maintain a tight grip on the policed. This will involve routinely demonstrating that they are in control – and overwhelming any resistance to this control through coercive force.

The Glaswegian police I observed had an occupational culture which took for granted that they needed to demonstrate routinely to those they policed who was in control of the streets. At that time in South Glasgow, the key audience for this display of control were the working class young men and boys – ‘neds’ or ‘toe-rags’ in the slang of the time – who faced a marginal economic future, having been decanted from the slums of the Gorbals to outer Glasgow’s large 1960s housing estates. The cops needed to show who was in charge, and this was done by ensuring that those they policed complied with every minor police instruction. The police were, in my view, stuck in a hard-power trap.

It seems probable, too, that police departments are stuck in hard-power traps in multiracial inner cities in the US. With intense mutual distrust between cops and people of colour in these areas, the opportunities for deploying soft-power policing may have been squandered over the years – if they ever existed in the first place. The police may believe that coercive hard-power tactics are, realistically, all that are available to them. Predictably, therefore, too many encounters between police and suspects are characterised by mutual fear and hostility – leading to the sorts of lethal outcome which still happen with alarming regularity when young black men are stopped as suspects by patrol officers.

How do the police move from hard to soft power? This is one of the hardest challenges facing urban police. Reform in US cities may prove a real uphill struggle, and the stronger UK tradition of policing by consent may provide firmer foundations. There needs to be strong leadership and better training to ‘sell’ principles of procedural fairness to the – probably initially sceptical – workforce. Much more effort needs to be given to ensuring that frontline officers are better equipped with de-escalation techniques in handling conflict. There still needs to be much more self-scrutiny about current UK practice in using stop-and-search. All this will take time and effort. But the alternatives – more deaths in police encounters, riots and urban unrest following each tragedy, further loss of police legitimacy – don’t bear thinking about. 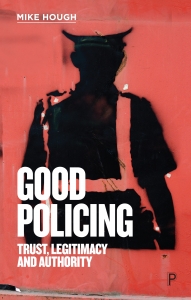 Good Policing: Trust, Legitimacy and Authority by Mike Hough is available on the Policy Press website. Order here for £11.99.