Hardboiled and neo-noir crime fiction: What’s in it for criminologists?

Cultural criminologists and ultrarealists have recently found common ground in a critique of the Nordic Noir multimedia crime fiction phenomenon. I take a more positive view, not only of crime fiction as a resource for criminologists, but also of the potential for the Anglo-American hardboiled and neo-noir traditions to provide insight into the corruption, alienation, superficiality and amnesia of late capitalist society.

In Through Scandinavia, Darkly (2020), Professors Keith Hayward and Steve Hall undertake a criminological critique of Nordic Noir, arguing that the genre has experienced a dramatic reversal of direction in the 21st century, sacrificing its characteristic gritty realism for a thinly concealed escapism that displaces the neoliberal reality of contemporary Scandinavia. There is much to admire in this critique, especially Hayward and Hall’s discussion of the popularity of what I call the occult detective story within Nordic Noir, but it nonetheless contributes to a prevailing and ultimately misleading criminological perspective on crime fiction.

The second decade of the 21st century has seen the growth of crime fiction from the most popular genre of published fiction to a genre that is more popular than all the other genres combined. Crime fiction, which includes the subgenres of mystery, suspense and thriller, outsells all other fiction in the global book market. Agatha Christie is the bestselling fiction author of all time, and her most commercially successful novel – And Then There Were None (1939) – has sold more than 100 million copies in over 50 languages. The genre has attracted many authors better known for their more literary fiction. A representative sample from the Anglosphere alone includes: James Barrie, Gertrude Stein, J. B. Priestley, Elizabeth Bowen, Evelyn Waugh, Chester Himes, Charles Bukowski, Kingsley Amis, A. S. Byatt, Joyce Carol Oates, John Banville and Paul Auster. Crime fiction has not just attracted great authors who might want to dabble in the genre as a diversion from their more strenuous work, but also serious attention from eminent critics, including T. S. Eliot, Walter Benjamin, Marjorie Nicolson, Robert Graves, Ayn Rand, W. H. Auden, Ernest Mandel, Tzvetan Todorov, Cedric Robinson, Julia Kristeva, Catherine Belsey and Slavoj Žižek. Crime fiction has, moreover, had a direct impact on social institutions and practices in virtue of its appeal to influential personalities, such as Hans Gross, Sigmund Freud, Ludwig Wittgenstein, Reinhard Heydrich, Jean-Paul Sartre and Simone de Beauvoir.

Most crime fiction is nonetheless formulaic, superficial and clichéd, and Christie’s 66 crime novels are paradigmatic in this regard. The majority are short in length and constitute little more than intellectual and absorbing puzzles affording a type of satisfaction that is not dissimilar to a complex crossword. Notwithstanding, it seems unlikely that there is nothing of interest for the criminologist in a genre that has received so much attention in its short history, and I develop a theory of its value in A Criminology of Narrative Fiction (2021). I demonstrate that some fictional narratives have aetiological value, explaining the causes of crime and social harm, and that there is no essential difference between fictional and non-fictional aetiologies. The book includes seven case studies and although I did not set out to focus on a particular genre of narrative fiction, my examples of the causes of crime (as opposed to social harm) are drawn exclusively from the hardboiled category of literature and the neo-noir category of cinema.

Hardboiled detective fiction originated in the American pulp magazine Black Mask, which was launched in 1920, and replaced the amateur sleuth with the ‘hardboiled dick’, a protagonist who did not belong to the socioeconomic elite and whose livelihood was reliant on his – they were almost all men in the first few decades – crime-solving skills. The hardboiled genre was characterised by its private detective protagonist, narration in the first person and realistic portrayal of the socioeconomic realities of America during the interwar period. It was pioneered by Dashiell Hammett, perfected by Raymond Chandler and reached the peak of its popularity in the middle of the 20th century, after which it came under increasing pressure from the police procedural. The police procedural, which drew heavily on the hardboiled detective, achieved its dominance at the same time that neo-noir replaced noir as a cinematic genre. The police procedural was popularised by John Creasey in the UK and Ed McBain in the US, whose Chief Inspector Roger West (1942–1978) and 87th Precinct (1956–2005) series were published over four and five decades respectively.

One of the uses of hardboiled crime fiction for the criminologist is the starting point identified by Hayward and Hall – its gritty realism. This realism includes representing everyday reality in detail and with accuracy, the authoritative representation of possible but non-existent situations, and the authentic representation of what certain lived experiences are like. My theory employs novels, graphic novels, television series and feature films as case studies. Some of the best examples – such as HBO’s The Wire (2002–2008) and Martin Scorsese’s The Departed (2006) – are already familiar to criminologists, but I also discuss narratives that have received less attention, such as ITV’s Broadchurch (2013–2017), Michael Mann’s Miami Vice (2006), Marlon James’s A Brief History of Seven Killings (2014) and Derek Raymond’s Factory (1984–1993) series. There are three examples I did not have space to discuss, but each of which is sufficiently rich with criminological potential to dispel the discipline’s erroneous perspective on crime fiction. Coincidentally, they are also the three films regarded as launching neo-noir as a distinct cinematic genre: Robert Altman’s The Long Goodbye (1973), Roman Polanski’s Chinatown (1974) and Arthur Penn’s Night Moves (1975). The least acclaimed of these, Night Moves, is the most startling in terms of its demystification of late capitalist society as artificial, alienating and amnesiac – a place where no resolution can ever be achieved and no one would remember if it were.

Rafe McGregor is Senior Lecturer in Criminology at Edge Hill University, prior to which he spent fifteen years in the police and the prison service.

You may also be interested in: What crime fiction taught us in lockdown by Rafe McGregor 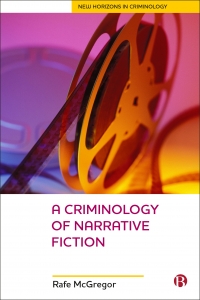 A Criminology Of Narrative Fiction by Rafe McGregor is available on the Bristol University Press website. Order the hardback here for £48.00, or the EPUB for £17.59.