On Monday evenings in the first, strange months of lockdown, I’d have dinner early and pad back to my study in the attic with a cup of tea and a notebook.

I’d been working up there most of the day, in at the deep end with online teaching and virtual meetings. The clocks had just changed so evenings were back, it was a beautiful spring and I wanted to be outside. But I thought it would be good to have something in my diary, now that my old routines had fallen away. And I had other reasons for wanting to be there.

There had been seven or eight of us before, when we’d met in the community hall, with a whiteboard and a table of snacks. A notice in the foyer listed the sessions: Yoga for Beginners; Knit and Natter; Conversational French; … and our Creative Writing for Pleasure. But when lockdown began, the hall was converted to a food bank and distribution centre. Classes were cancelled or went online. Three of us signed up for the WhatsApp version of our writing group.

We soon established a routine. Andrea (not her real name) would ask us how our week had been. We’d take it in turns to speak, and to listen. Going round, we’d find a theme or two, connecting the things we’d been saying. I learned to jot down a few words or phrases that jumped out at me, because I knew that Andrea was about to tell us all to write a poem or short story. Then I’d scribble in my notebook, knowing that I’d soon be reading out whatever I’d written, however bad. Not writing, or not being satisfied with what I’d written, would not be an option.

After we’d warmed up a bit, it was time for something different. Andrea would tell us about a literary form or device – perhaps a poetic structure or a way of working with different points of view – and we’d have a second go at writing and reading out. Sometimes we’d return to a piece or theme we’d started before.

The lockdown stretched out – into April, May, June – and so did the workshops. I tried to give up a number of times, as the perfect evenings called me outdoors, and as I continued to find the workshops hard. This was never simply ‘writing for pleasure’ – I had unfinished business.

Jenny Erpenbeck, the German novelist and essayist, has said that ‘the most important reason for writing is probably that we are at a loss for words’. I began to see her point.

My research assistant had been inviting people to creative writing workshops, as part of a project I’d been leading at the University of Sheffield. I’d thought all this through: creative writing would bring people together, allowing them to explore subjects that were otherwise difficult to raise, embarrassing and sensitive perhaps. Workshops – the standard method for teaching and cultivating creative writing skills – would be led by writers, and attended by young people. Our project involved young British Muslims and explored sexual relationships. We arranged workshops in schools and colleges, community centres and libraries.

We had mixed experiences. Some of the workshops bumped along with low attendance and stilted atmospheres. I spent an uncomfortable evening in the private room above a coffee shop in Leeds, where we’d planned a workshop for young gay men, with just two participants, one of whom was gathering material for a play. Sessions in a school floundered, for reasons we never understood.

But many of the groups cohered, and the participants formed strong, trusting relationships. They laughed together, opened up, relaxed enough to write and share their work. Nothing was forced. We didn’t want to pressure or expose anyone. These sessions worked well, and resulted in beautiful and accomplished writing. We gathered some of the best in an anthology of short stories, A Match Made in Heaven: British Muslim Women Write About Love and Desire, which the literary press HopeRoad published last year. We also learned from the process of writing, including the writing that refused to come together, and the writers who continued to be lost for words.

I knew how to lead a research project but there was a lot I didn’t understand about creative writing. So this was my reason for signing up for Andrea’s workshops, acknowledging that I was a beginner, and not very good. But once I’d started, I had to go on. Like the participants whose writing hadn’t quite made it into the anthology, I’d been drawn in, searching for the right words, and hooked.

Though I’d started out with creative writing as a means to an end – a research tool – I started to find it compelling in itself. So did many of the participants in our project. Finding pleasure in writing, and sometimes finding themselves in writing. We veered away from our original focus. It was no longer just about being young or Muslim. The writing had taken over and with it, the sense of possibility that comes when one is lost for words – off script, for a moment.

In my own little writing group, something similar happened. I was as surprised as anyone by what came out of my pen, not by the literary quality of the writing, but by the unexpected changes of direction, the returns to experiences and memories, barely registered or long forgotten, the stories in me. This sense of discovery – grasping towards experiences and understandings, just out of sight, and seeing what isn’t yet understood, despite all that is said and written in other ways – point to some of the things I think creative writing has to offer social research. These are the reasons I’ll continue with creative writing, in my private notebooks, and in my research. They’re also the reasons I’ve worked with Helen Kara and other researchers, who use creative writing in their work. We hope that our book – Creative Writing for Social Research – will guide and inspire other researchers to continue this project.

Richard Phillips is Professor of Human Geography at the University of Sheffield. He is a specialist in creative and arts-led research methodologies, which he practises in his own work and encourages students to try in the field trips he leads in cities from Liverpool to New York. Richard’s books include Georges Perec’s Geographies (2019), Fieldwork for Human Geography (2012), Sex, Politics and Empire (1996), and Mapping Men and Empire: A Geography of Adventure (1997) and now Creative Writing for Social Research with Helen Kara. 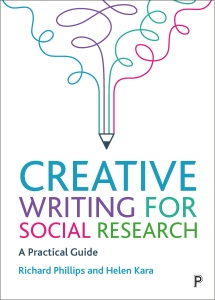 Creative Writing for Social Research: A Practical Guide by Richard Phillips and Helen Kara is available on the Policy Press website. Order here for £22.39.