Telling data stories: Narrating how data are cooked and consumed

A decade ago, the word ‘data’ seemed to be largely the preserve of researchers and a few professional administrators and workers. Now, it has entered our everyday lexicon. We are aware that our data are routinely harvested, that our digital world generates and consumes vast volumes of data and that our economy and government are becoming data-driven. Yet, it is not always clear what data are, how best to make sense of them and what is at stake.

Across the academy, government and business data have been largely been viewed as the raw ingredient that enables the creation of information and knowledge. Data are gathered facts about the world captured through scientific measurements, government surveys, administrative systems, digital devices, academic research and fieldwork. Over the past decade, the emerging field of critical data studies (CDS) has started to transform this traditional view of data.

Rather than data being raw and pre-existing their capture, CDS maintains that data are always ‘cooked’. How data are generated is not inevitable or independent of systems of thought. Their production is shaped by research and system design, technical specifications, organisational processes, and protocols and standards. Choices about their generation are made and framed within an operational context and guided by prevalent knowledge, established practices, cultural norms and intended uses. At the same time, their generation is open to the unexpected, hunches based on taste, wrangling, compromise, and tweaks based on a feel for the flavour of data. The cooking of data rarely follows exactly the planned recipe.

As a cooked product, CDS contends that data do not simply reflect the world; they are constructions about the world and they perform work in the world. Data create social realities, used to generate meaning and facilitate action. In this sense, data are engines rather than mirrors. The work they perform does not depend only on their technical properties, but is socially and culturally mediated. The same data can have different meanings and purposes for different communities of practice, and diverse effects depending on context and circumstance.

In other words, CDS advances the argument that we should never accept data at face value. Instead, we need to be more mindful of the politics and praxes involved in: the data lifecycle and how data are made; how data are used and the ways we live with data; and how we understand and make sense of data.

It is these politics and praxes that my book Data Lives: How Data are Made and Shape our World exposes through a collection of 27 interconnected short stories and biographical essays. The use of storytelling rather than a more formal academic narrative was not only a choice about the most effective way to communicate the core concepts and findings of CDS, but also reflective of ideas central to CDS thought and practice.

Storytelling is inherently a more engaging and accessible register for communicating ideas than conventional academic accounts that are usually written in the third person and are distant and impassionate in style, using specialist jargon. Short stories, novels, comics, documentaries, biographies, television dramas, animation and movies are more playful, provocative and rooted in everyday experience, and can use various forms of narrative devices, such as metaphor, allegories and analogies to convey meaning.

In the case of this blog post, the metaphor of preparing food for consumption is employed, using the terms ‘raw’, ‘ingredient’, ‘cooked’, ‘recipe’, ‘taste’ and ‘flavour’ to elucidate the need for a critical understanding of data. This metaphor is echoed in advertising; for example, ‘all-you-can-eat data’ for mobile internet services. At the same time, metaphors can become mixed, such as the use of ‘engine’ and ‘mirror’. Indeed, dozens of metaphors have been used in the literature to convey meaning and insight about data.

CDS holds that data never speak for themselves. Instead, we tell stories about data, and stories with data, in which there are inherent politics at play in how they are discursively figured. As Paul Dourish and Edgar Gomez Cruz note, ‘data must be narrated – put to work in particular contexts, sunk into narratives that give them shape and meaning, and mobilized as part of broader processes of interpretation and meaning-making’. To further mix our metaphors, data are given voice.

Data Lives is centrally concerned with narrating data with respect to how they are produced and used, rather than how stories can be told using data. Here, the creativity inherent in storytelling is reflective of the creative processes of making and employing data, and the framing of data as a sociotechnical endeavour is well expressed through ‘narrative elements: actors, motives, expectations, actions, types, histories, proclivities, habits, intents, and on’, as Dourish and Cruz put it. The use of biography grounds the narrative and arguments in tangible real-world experiences, adding liveliness and illumination to the illustrative examples.

For example, Jessica Foley has run over 40 workshops between 2013 and 2020 through her Engineering Fictions project, using improvisational writing and wordplay techniques, along with facilitated conversations, to creatively explore ideas and questions about digital technologies and data practices with communities of interest (citizens, academics, practitioners, etc.). Deborah Lupton and Ash Watson have used a similar approach in their ‘Re/imagining Personal Data’ project, running two workshops in which creative writing prompts were used to explore the material and affective dimensions of personal digital data. Their ‘Algorithmic Micropolitics’ project incorporated a workshop whose aim was to collectively produce a zine that examined the algorithmic processing of personal data.

Through the creation and telling of data stories, the cooked nature of data and the vicarious ways in which we live with data are revealed in a familiar, grounded narrative form populated by everyday actors, action and motives, and shed of academic jargon. Telling data stories makes clear the inherent politics and praxes of making and using data. In this sense, they are useful rhetorical devices for communicating academic insights to a wider audience and raising political consciousness about data power and data justice issues that might foment action. In a world that is increasingly data-driven, such mindfulness and critical data literacy is needed to counter the more pernicious aspects of the data revolution.

Rob Kitchin is a Professor in the Maynooth University Social Sciences Institute, Ireland. He is author/editor of a number of books about technology and society and is a recipient of the Royal Irish Academy’s Gold Medal for the Social Sciences. 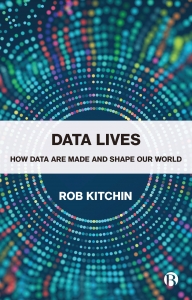 Data Lives: How Data Are Made and Shape Our World by Rob Kitchin is available on the Bristol University Press website. Order here for £15.19.