Could you really get 10 years in prison for lies about travel?

Could you really get 10 years in prison for flying into London and falsely claiming you travelled from a safe country rather than one on the UK’s ‘red list’?

These days, you have to complete what’s called a public health passenger locator form before you enter the UK. That requires you to say which countries you have been in during the previous 14 days. You have to declare that the information you have entered is correct.

This form presumably counts as an ‘instrument’ for the purposes of the Forgery and Counterfeiting Act 1981. Section 1 of the act says:

A person is guilty of forgery if he makes a false instrument, with the intention that he or another shall use it to induce somebody to accept it as genuine, and by reason of so accepting it to do or not to do some act to his own or any other person’s prejudice.

So deliberately giving the wrong country to avoid quarantine would presumably be a breach. But could you get 10 years in prison for it?

Only if your case was tried in the Crown Court. And it’s unlikely your case would be dealt with before next year at the earliest, thus removing some of the deterrent effect of a prosecution. In the magistrates’ court, the maximum sentence is six months.

Even in the Crown Court, you wouldn’t get anything like 10 years – unless, I suppose, you’d deliberately and fatally infected many people while somehow remaining healthy yourself.

In 2012, the appeal court upheld a sentence of six and a half years on a team of forgers who admitted producing large numbers of false identity documents – which allowed illegal entry to the UK, the creation of false bank accounts and bogus driving licences.

The barrister Adam Wagner has also raised doubts about whether the government can lawfully impose charges on travellers for testing and quarantine. These may be contrary to the International Health Regulations 2005, given effect by the Health and Social Care Act 2008. The thinking behind these regulations is that if you make people pay then they will refuse to cooperate.

Is there a greater good here? Are charges of £1,750 and prison sentences – even short ones – morally justified for the greater good?

We have seen no successful challenges in the courts to the government’s emergency legislation over the past year because the judges have regarded the restrictions – though draconian – as proportionate.

We can be sure that no court would regard a 10-year prison sentence for lying about where you have been on holiday in the same light.

Joshua Rozenberg is the only full-time journalist to have been appointed Queen’s Counsel honoris causa. After taking a law degree at Oxford he trained as a solicitor. He is an honorary Master of the Bench of Gray’s Inn and a non-executive board member of the Law Commission. 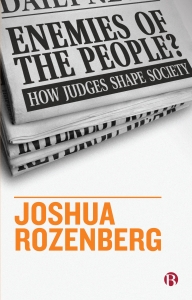 Enemies of the People? by Joshua Rozenberg is available on the Bristol University Press website. Order here for £11.99.