Hidden in the dull language of social policy is the startling fact that if you are unemployed, almost everywhere in the world, your government will attempt to fundamentally change you as a person – to reform your wayward ways.

This reform occurs via interrogations, where unemployed people are required to reveal the intimate challenges they experience in finding work, disclose their personal faults and failings, and agree a personal plan with the Job Centre. They must then engage in the ordeal of constantly seeking work, monitored, directed and threatened by sanctions for any non-compliance.

Without clear empirical evidence, governments and welfare offices take it as an act of faith that employment counselling can fix people up and get them back to work. There is little reliable scientific research to suggest to employment counsellors what they might do effectively to serve unemployed people and so, aside from referral to training, the whole process tends to be a cognitive behavioural therapy (CBT): That is, getting people up and about, moving, enthusiastic and active, with practical help with CVs and presentation issues and frequent enforced and monitored job searches.

Often these counselling sessions requires the unemployed person to sign a contract which details their flaws and the steps they will take to become better people. Strikingly, this remedy is offered to all jobseekers, tailored to their individual circumstances, but really only producing more vigorous job seeking, a more competitive labour market, yet never actually producing any jobs.

At another level, one of the main measures of whether a country is thriving economically and socially is to look to its unemployment rate. This totemistic number is closely tracked by financial markets and is central to markets funding governments. Bill Clinton’s political adviser James Carville once declared that he wanted to be reincarnated as the bond market because the bond market intimidated everybody. In a way, Clinton’s cruel programme of welfare reform, which he marketed as ending welfare, was actually about markets serving to reshape government and politics. His signature Personal Responsibility and Work Opportunity Reconciliation Act, which dramatically limited access to welfare, introduced workfare requirements and generally made the USA a very hard place to be poor.

Over the last half century, the world of welfare has tilted towards ever harsher measures of reforming people on benefits. Other countries, often under subtle pressure from the International Labor Organization, Eurofound and the OECD, or less subtle pressure from the World Bank, IMF and financial markets followed suit. Britain under Thatcher, Blair, Cameron and May became ever more inclined to reform the moral character of unemployed people, as did Germany in the Hartz reforms and France under Sarkozy.

Even if it were a sensible idea, hardly any of Government’s efforts to reform its unemployed people actually work. Furthermore these ‘welfare reforms’ are also actually focused on reforming supposedly feckless government agencies, self-reform, of services. The endless evaluations of active labour market studies have failed to establish any empirical basis for the curious impulse to create institutions to counsel unemployed people, fix their behaviours and reform their characters rather than just investing in jobs – in nursing, teaching or other understaffed areas. All the market and institutional efforts to produce smaller, nimbler government have produced a colossal activation industry, government deficits have grown, budgets and institutions have bloated. It is indeed very expensive to micromanage every poor person in a country.

Still, the problems of long-term unemployment, poverty, disadvantaged, marginalised and angry communities and regions have worsened. In the name of reducing government, the government uses its power to greatly increase its involvement in poor people’s lives. Nonetheless, the circuits of reform continue in an unstoppable cascade of intervention and escalation.

This urge to help and to reform people and populations has a long and complex history. Back in 1981, Thatcher stated: “Economics are the method; the object is to change the heart and soul”. Entirely secular theories of the welfare state, sociology or social policy have yet to provide an explanation for the contradiction in contemporary welfare – to help and support, but also to reform and punish. Here religious ideas are not consigned to history, a vestigial collection of superstitions and fairy tales. Rather, theology informs the academic terrain from where the idealisation of work was hewn, and where the debate around the contradictory and unresolved tensions between charitable support and reforming other people rages on. To understand contemporary social policy, we need to explore our conceptual inheritance.

Reforming people is a social policy with theological precursors. The medieval church once cared for the poor via charity, but increasingly attempted to reform their morals and reshape them as good workers, initially within cities, and then through state-level poor laws. Beyond the imperative to alleviate suffering through compassion, the poor increasingly appeared as the fallen, in need of redemption, and often through penitential and punitive logics. Moralising distinctions between the deserving and undeserving poor were translated into social policies, so that only those who displayed their work ethic were entitled to support. Indeed, this imperative for reform and redemption overwrote charitable impulses, so that the state and social services were increasingly ‘cruel to be kind’, finding fault in individual conduct rather than pointing towards structural conditions of unemployment.

Recognising these elements as part of our cultural and policy landscape is a first step towards rethinking how welfare and the low-pay economy should be governed in the age of pandemics, climate change and technological disruptions. Rather than reforming people to transform them into workers, we need to recover the idea of accepting and supporting them as citizens. This is a moral obligation beyond the demand to work, which also has deep cultural roots, but without which we will diminish our own prosperity, not to mention foreshorten our future.

Tom Boland is Senior Lecturer in Sociology at University College Cork. His recent publications include articles in Anthropology, Philosophy, Sociology and Theology, and his 2019 book The Spectacle of Critique was published by Routledge. 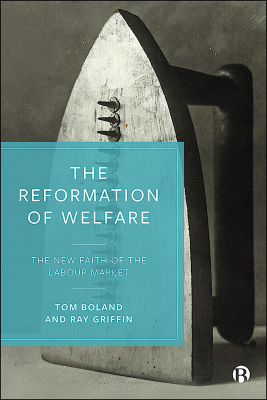 The Reformation of Welfare: The New Faith of the Labour Market by Tom Boland and Ray Griffin is available to order on the Bristol University Press website.