After a decades-long run of steady growth and predictable development strategies, most big cities in the Global North are facing a moment of challenge and uncertainty that raises a number of important questions about urban futures.

For urbanists, the COVID-19 pandemic has interrupted many established patterns and assumptions. It is an unsettling time that pushes us to imagine potential new urban configurations and project some possibilities. While nobody is in a position to know what lies ahead, we can nevertheless identify some key points for consideration based on emerging signals.

The past two decades have been characterised by a pattern of superstar city development that concentrates resources – jobs, residents, amenities – in select core cities. A variation of the ‘global city’ phenomenon, superstar cities have dominated their regional landscapes, operating on a global scale but also notably centralising investment and development in dense urban cores that generate seemingly irresistible gravitational pull. While this emergence of the superstar city has infused some cities with remarkable dynamism, it has also raised questions about the fate of what we refer to in our recently published book as ‘secondary cities’ – the neighbouring cities with their own relatively independent histories and identities that are relationally linked with but still distinct from their dominant neighbours. Secondary cities have navigated the centralising tendencies of the new urban landscape in a variety of ways, alternately benefitting and suffering from their proximity to the superstar. Making sense of what to do with and about these and other ‘overlooked’ cities – shrinking cities, legacy cities, left-behind places – in the context of superstar urban development patterns has emerged in recent years as a priority for a growing number of urbanists.

So how does this recent history connect with our current COVID-19 pandemic moment? At the very least, the pandemic has generated new doubts about the viability of an urban landscape defined by superstar cities. A recent article on Manhattan in the New York Times openly wonders ‘what will happen to all the empty office buildings and hotels?’. Meanwhile, from the other end of the spectrum, as residents flee traditionally dominant cities in the US there is renewed excitement that office and residential conversions can turn old mill towns and similar ex-urban and rural centres into revitalised cities attractive to remote workers who see no reason to return to the pre-COVID-19 status quo. With scholars estimating that 37 per cent of US jobs could plausibly be performed at home during the pandemic, the potential for remote work has thrown established assumptions about urban development into question.

But how likely are real changes to the existing urban landscape? And if they do occur, how might these changes impact urban lives and livelihoods? It is far too early to say with any confidence exactly what changes might occur or how far they will reach. But it is worth noting that the patterns of diffusion currently unfolding are not new; rather there are significant signs that the pandemic is simply accelerating regional shifts that were already underway as residents and business interests confront what they see as the negative dimensions of agglomeration (diseconomies of scale) in superstar cities. Growing frustrations with overcrowding, traffic congestion and high land costs have now been joined by health anxieties and the new remote working norms to precipitate moves away from established urban cores. But where do these residents go? In the US, preliminary data shows that most residents leaving cities like San Francisco, New York, Seattle and Los Angeles stay within 100 miles of their original home, signalling new intra-regional connections.

This shifting landscape creates both new challenges for core cities and new patterns of development for the neighbouring secondary cities that absorb the overflow. While welcomed by some, the new attentions brought to secondary cities are not always positive; the flight from superstar cities has contributed significantly to rising housing and real estate costs in secondary cities, compounding already emergent gentrification and displacement pressures. In our home Puget Sound region in the US, the port city of Tacoma – long defined by industrial decline and ineffective efforts to develop a downtown business core in the shadow of Seattle – has, since 2017, been among the hottest housing markets in the country. More recently, with the unfolding of the COVID-19 pandemic, home prices increased 18 per cent between March 2020 and March 2021, compared to an 8 per cent increase in Seattle. Lower-income households are also being priced out of the market. The number of owner and renter households in Tacoma earning less than $25,000 a year declined by 21 per cent between 2016 and 2019, while households with incomes over $100,000 increased by 59 per cent in the same period.

Against this particular form of potential diffusion, the concept of the ‘polycentric urban region’ (PUR) becomes newly salient. Introduced in the 1990s, PUR emerged in response to the patterns of urban decentralisation brought about by the previous waves of suburbanisation, globalisation and deindustrialisation. As the established expressions of ‘monocentricity’ that characterised most of the industrial era were unsettled, polycentricity was envisioned as a way to coordinate activities across a region’s multiple urban centres in a more deliberate and sustainable approach to regional development. As we have seen from the rise of global cities and superstar cities, enthusiasts of polycentricity underestimated the value professional services and technology industries would place on face-to-face contact and the role that entertainment, consumption and ‘creativity’ would come to play in cities. Outside of a small handful of cases – such as the Randstad in the Netherlands – examples of true polycentricity are hard to find. Instead, we see regional domination by core cities as select activities and populations are dispersed across the regional landscape in ways that feed the superstar at the centre at the expense of more measured balance and coordination.

The currently unfolding post-pandemic moment offers an opportunity to revisit the PUR ideal and advance research on intraregional governance. This isn’t an alarmist projection of the end of cities. Rather, it is an acknowledgement that we have seen this type of challenge to monocentricity before and it was neither as sustained nor as successful as many PUR advocates originally anticipated. Like that earlier period of uncertainty and its (monocentric) resolution, the extent and character of any current transformations will depend on questions of political power and the effective articulation (or not) of coherent alternatives to prevailing economic development logics. Only time will tell if the patterns of diffusion we see now will continue. But whether they do or do not, the same questions remain about whether and how the PUR vision can effect balance, coordination, cooperation and inclusion across a regional landscape. If diffusion continues, how will it continue? Will it be dominated by elites fleeing the centre in ways that bolster regional gentrification and displacement? Or can we achieve the political capacity and policy vision to advance a more desirable and socially just transformation? As we discuss in our book, our hope is that we can learn from recent decades in order to ensure that PUR comes to entail something like a ‘region of cities’, where power and other resources are shared through regional networks of solidarity, treating ‘the various cities as valued and integral components of the regional project’.

Mark Pendras is an Associate Professor in the School of Urban Studies at the University of Washington Tacoma.

Charles Williams is an Associate Professor in political science and labor studies at the University of Washington Tacoma. 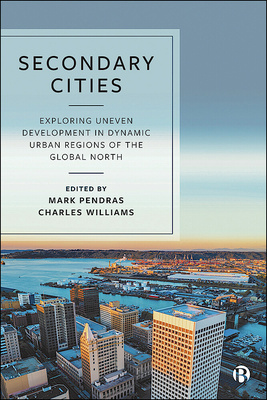