Countries around the world have been trying to contain the power of tech behemoths in the name of public interest with a whole set of existing and new mechanisms. These range from reinterpretation of century-old antitrust legislation in the United States to new legislation such as the proposed Digital Service Act package in the European Union.

The energy, time and public money invested in leveraging existing laws, and creating new ones, is fascinating compared to almost 30 years of laissez faire approaches towards digital markets, supported by a blend of techno-solutionism and neoliberalism. Yet the long-term effects of newly found initiatives remain largely unclear: are they simply to restore competition in digital markets, or to ensure other benefits to society? While we may live to see Google’s web search superseded by competition, the nature of social networking, for example, poses an additional difficulty: what is the point of a social network if most people we may want to get in touch with are not on it?

Similar to the physical monopoly character of utilities such as water, gas and electricity, whose distribution requires singular pipelines to our homes, social networking makes far more sense if it is unified. Unlike utilities, digital monopoly platforms have been largely privately financed. In the process, their business model has ravaged our local news and media producers, framing us in cognitive spaces where hardly a semblance of control over filtering and displaying of content remains. In this world, producers of content struggle to reach us. When they do, they may not be paid for their work. Faced with constantly changing rules on the inclusion of the results of their work in our web search results, on our social networking walls and on our audio-visual storytelling platforms, it is the mediator, the platform, which reaps disproportionate rewards. Granted, there are initiatives towards redistributing rewards to the struggling news industry such as the News Media and Digital Platforms Mandatory Bargaining Code in Australia. However, these initiatives do not tackle the main problem – the platform business model built on controlling, processing and commercialising personal data. Holding perfect competition as the ultimate normative goal for regulating these markets only promises to reset the stage for a new race to generate private wealth and commodify data: from smart cities through health care to credit scoring.

But what if the normative goal ceases to be perfect competition, and we replace it with a concept that does not hold private wealth creation as the main vehicle through which societies and economies advance? This would require the recognition of the right of communities of associated humans to affect the social forms in which wealth is produced, regulated and allocated. In the second half of the 20th century, when the production of public wealth exploded, beyond the Keynesian narrative built on top of the neoclassical analytical framework, there was no conceptual or theoretical framework to justify such policy decisions. An affirmative framework may be required nowadays due to the decades-long capture of policy making by ideas hostile to expansion of public wealth.

There are two obstacles for policy makers to advance such an affirmative approach: first, narratives provided by mainstream economics, and second, the lobbying power of profit-driven firms. Economists theorise the vast production of public wealth with either negative terms, such as ‘market failures’, or with extremely narrowly applicable and hence not very useful concepts such as ‘public goods’ (e.g. street lights). Regardless, they manage to impose the view that markets and commodities are the most efficient and desirable way to produce wealth. At the same time, and as the EU rolled out anti-trust fines and new regulatory packages between 2014 and 2020, Google, Amazon, Facebook and Apple increased their lobbying budgets in Brussels by 510 per cent. In 2019 alone, Google spent €8 million on lobbying.

Digital platforms have benefitted immensely from the historically enormous public investment and innovation in the production of science, technologies and software that forms the backbone of the software and networking stack on which they operate. Such production of public wealth and public value has been poorly recognised. Platforms need not be advertising financed, nor primarily profit driven. Our social network feeds could be opened up via publicly defined and open interfaces so that all aspects of our social life – local and global news, events, culture, sports, political and community debates – can be represented, and so that both privately and publicly driven innovation in providing such pluggable and interoperable functionalities can thrive. The problem we are facing today, nowhere as painfully obvious as in the case of the COVID-19 vaccine, is that there is no clear understanding that for certain social functions, and certain types of production, the social cost of provision through commodities and their profit-driven production is too high. Digital platforms are an area where policy regulation in favour of publicly decided, planned, prescribed restructuring of functionalities and production purposes, seems inevitable. Otherwise, the social potential of digital networks will remain subordinated to the profit-driven self-satisfying engine of growth.

Paško Bilić is a research associate at the Institute for Development and International Relations in Zagreb. Toni Prug is an independent researcher based in Croatia. Mislav Žitko is a lecturer in Philosophy at the University of Zagreb. 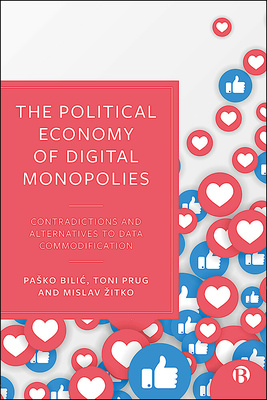 The Political Economy of Digital Monopolies: Contradictions and Alternatives to Data Commodification by Paško Bilić, Toni Prug and Mislav Žitkois available on the Bristol University Press website. Order here for £60.00.