Much has been written in the UK proclaiming the death of the welfare state during the last several decades. Like the end of history proclaimed by Francis Fukuyama in the early 1990s, these obituaries are premature. Modern democratic societies inevitably require complex social infrastructure. Electorates expect their governments to address crises such as COVID-19 by providing new or expanded services. In the UK, as elsewhere, education, health and social care issues are intensely debated and politicised. These everyday critiques focus upon what does not work well, what needs to be improved and the difficult choices that always need to be made in societies with finite resources.

Much of politics is preoccupied with social policy even if there are ideological disagreements about what combination of the state, market and voluntary sector activity should prevail. These debates have played out somewhat differently in different countries yet, in all of these, governments are expected to take responsibility for a vast and expanding range of social policies. The history of social policy, examined comparatively and over a long period, challenges the exceptionalism of UK narratives of welfare state decline.

Three ideological traditions have shaped approaches to social problems and social policy in Europe since the Industrial Revolution – liberalism, social democracy and Christian democracy rooted in Catholic conservativism. As mapped by Gøsta Esping-Andersen in his seminal book The Three Worlds of Welfare Capitalism (1990), these vied with one another with different results in different countries depending on the relative appeal of each approach to electorates. The idea of worlds of welfare capitalism suggests not just different ways of thinking but also cultural and institutional histories. In my book Three Roads to the Welfare State I depict these as both vantage points (perspectives on social and economic change) and as winding roads along which such changes might be navigated.

In various places conservatives have sought to resist liberalism and socialism, socialists have rejected liberalism and conservatism while liberals have sought to overcome conservativism and resist the influence of socialism. However, there have also been cross-pollinations of ideas and ongoing pragmatic accommodations have been made by political parties in order to maximise electoral support. Many European countries have long been run by coalition governments which represent more than one ideological perspective or by broad political parties seeking to manage internal ideological differences concerning social issues.

The rationale for much social policy has been functional, notwithstanding some differences from country to country when it came to who did what – the state, markets or the voluntary sector – within mixed economies of welfare. Countries affected by broadly similar processes of social change over time have required similar services and institutions: schools, universities, hospitals, utilities and so on. How these are organised continues to be worth arguing over. For example, the absence of pre-school education as the legacy of conservativism can inhibit the ability of women with children to engage in paid employment. Whether access to health care depends upon individual levels of wealth or is made free at the point of use can literally be a matter of life or death.

Europe’s three worlds of welfare capitalism came to be reconciled, sometimes begrudgingly, with democracy. The great intellectual champions of 19th-century liberalism mostly opposed giving the vote to the masses. Europe’s Christian democratic parties were built upon a foundation of Catholic thought that flirted, and more, with fascism. Social democracy emerged in conflict with anti-democratic forms of socialism and was forever conflated with this by liberal opponents of collectivism. In the democratic era, liberals, conservatives and social democrats have competed for electoral advantage by promising to address social problems identified by voters, usually by expanding infrastructure, rights and entitlements and also the scope of social policy.

Neoliberalism promoted the separation of economic decision making from politics in an attempt to protect the economy from democratic mandates to expand public expenditure and the remit of social policy. It has been proclaimed most loudly as a political ideal in the Anglosphere, in countries where the English of Adam Smith was spoken and where liberals rather than social democrats or Christian democrats have mostly fashioned the welfare state. During the early 19th century, British laissez faire liberals advocated sweeping away impediments to market forces such as laws and customs of providing welfare for the poor that had operated for centuries. Even the 1597 and 1601 Poor Laws replaced an earlier charitable system run by Catholic religious organisations. Before the invention of laissez faire, parish relief funded by rates assisted ‘the impotent’, who were unable to work because of illness or old age. Magistrates regulated wage levels in some areas. Outdoor relief was extended during the late 18th century to include the ‘industrious poor’ in the south east of England who faced seasonal unemployment. Something like laissez faire, according to Karl Polanyi in The Great Transformation (1934), could not have ever come into existence without having been deliberately imposed through legislation by a political system that was insulated from a broad electorate.

Societies have always organised some forms of collective welfare, and modern societies with complex divisions of labour need a lot of infrastructure. Whether we are talking about collectivised services or markets or about some combination of both, complex societies cannot manage without education, health care, social insurance and other forms of infrastructure on a scale that requires some degree of planning. The nature and extent of this might be influenced by ideology but some degree of social policy is functionally necessary. Nine decades ago Polanyi argued that social policy was inevitable while neoliberalism, like laissez faire liberalism during the 19th century, is something that needed to be invented and imposed. However, even countries with strong economic liberal traditions proved unwilling to completely dismantle their welfare states. The reimposition of the levels of laissez faire that were imposed in Britain before the advent of mass democracy during the 19th century has not proved to be politically feasible.

The new worlds of welfare capitalism of the 21st century are influenced by the evolving functional needs of societies as well as by ideologies. To some extent, what is meant by social citizenship has continued to deepen. Rights and access to some welfare goods and services have been broadly improved or reimagined for women, people with disabilities and other groups that have faced discrimination in the past. In all places and at all times, Polanyi’s observation about the inevitability of social policy holds true.

Bryan Fanning is Professor of Migration and Social Policy at University College Dublin. 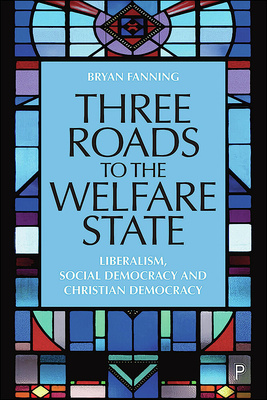 Three Roads to the Welfare State: Liberalism, Social Democracy and Christian Democracy by Bryan Fanning is available on the Policy Press website. Order here for £64.00 or order the EPUB for £21.59.