COP26: Setting a benchmark for success

At the end of October, leaders from across the world will gather in Glasgow for COP26 to make commitments that will have a profound impact on the future of our planet.

Unfortunately, the track record of these events over the previous 25 years has been characterised by compromise, voluntary targets, well-meant aspirations and enough loopholes to ensure that countries can avoid obligations that are seen as undesirable. The fear felt by many is that COP26 will, once again, result in bold announcements, a flourish of signed agreements and promises of action, yet in reality, little changes.

Whether such an outcome should be attributed to the failings of our political leaders, inherent failings of our political processes or the inevitable consequence of an economic model that prioritises the economy over the environment, is debatable. While we are unlikely to influence the outcome, perhaps we can identify some of the things that we would like to be achieved. If nothing else, this would give us a benchmark by which we could judge the success of COP26.

In order to draw up a list of desired outcomes it is useful to set out the key factors that drive damage to the environment and generate greenhouse gases. In other words, we need to understand the factors that perpetuate the current environmental crisis if we are to assess whether the causes have been addressed. There are five factors that I believe need to be addressed at COP26:

Before going into an examination of each of these five points it is worth raising one point: climate change will not be solved simply by introducing new technologies such as renewable power and electric vehicles. Yes, of course these things are needed but COP26 needs to achieve more than a commitment to increase the adoption of new technologies. We have to achieve a transformation in the way we live our lives, the things we value and those things that underpin a stable, secure and just society.

To expand on each of the five points:

Resources are finite, populations are growing and economic success is measured by growth in GDP. This economic model is unsustainable – even if the threat of climate change did not exist. The first aspiration for COP26 should be to recognise that our economic model has to change. At a high level it would be helpful if world leaders acknowledged that the pursuit of an ever greater GDP is unsustainable. At a more detailed level there needs to be a commitment that business activity accounts for economic costs. Environmental costing is complex, and in the short term, the best that we might hope for is a commitment to tax a specific group of unsustainably produced resources such as timber, palm oil, soya and animal products. While not offering a complete solution, it would demonstrate that the environmental cost of activities such as the destruction of the rainforest must be accounted for.

The rate at which the earth’s resources are being consumed is unsustainable. Governments have an opportunity to incentivise sustainable behaviours and discourage environmentally damaging ones. COP26 has an opportunity to establish a set of principles that underpin how governments formulate policies on energy, transport, industry, building regulations, farming and the disposal of products.

Corporate vested interests are able to exert strong influence on governments, resulting in protection and support for industry sectors that are driving climate change and environmental destruction. It would be a landmark achievement if the leaders at COP26 were to draft regulations that would require, at a minimum, transparency on the political influence of vested interests and ideally, to ban the activities of lobbying organisations that operate in specific industry sectors.

It has become fashionable for governments to proclaim that they want to create ‘green jobs’. No doubt, this aspiration is genuinely meant, but the reality is that many governments give disproportionate support to the fossil fuel sector. As we stand at the tail end of 2021, there is a desperate need to reinvigorate economies but the concern is that resources will go to traditional sectors, rather than shift significantly to green industries. A template for green growth is provided within the concepts presented by ‘The Green New Deal’. The leaders at COP26 have an opportunity to commit to actions consistent with these ideals.

A shift away from fossil fuels towards renewable energy will have a dramatic impact on countries such as those in the Middle East, North Africa, South and North America, Russia etc. It is imperative that COP26 sets out a strategy for transition that will mitigate the disruption to global trade and avoids rising geopolitical tensions.

I am guessing that, as you read down the list of five factors, you inwardly thought: “Well that ain’t going to happen”. And you are probably right. So what happens next? Well, at this stage we can only wait to see the outcomes from COP26. Perhaps there will be some surprises and our global leaders will achieve a step change in international political thinking. With luck, there might be announcements of legally binding commitments to dramatically reduce greenhouse gas emissions, achieving net-zero by 2050. But if we end up with vague promises and a desire to protect the economy, rather than the environment, we have a problem. The risk of passing the tipping point looms large, ever more serious climate disasters will occur and populations will lose faith in their leaders. Surely our politicians wouldn’t want that?

Richard Joy is an expert in organizational transformation and strategic change. He has been actively involved in environmental politics for many years and has been part of a task force advising on policy options for green growth, headed by leader of the Liberal Democrats, Sir Ed Davey.

Watch the recording of the Bristol University Press webinar COP26 and new strategies for climate action, featuring Richard and recorded on 19 October 2021. 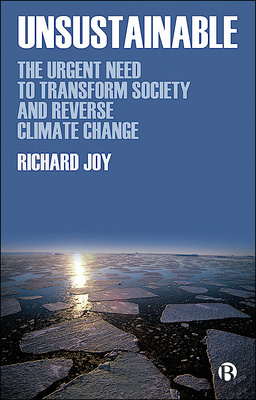 Unsustainable: The Urgent Need to Transform Society and Reverse Climate Change by Richard Joy is available on the Bristol University Press website. Order here for £15.99.