It has taken 300 scientists from the UN’s Food and Agriculture Organization to remind us that the ground beneath our feet is of equal importance to the air we breathe. Just hold that thought while pondering the outcome of this month’s COP26 global climate summit.

You might have heard very little about soil in Glasgow over the past two weeks – perhaps a little more about land and how it’s used and abused, particularly in the Amazon basin. We generally take soil – and land – for granted. That’s a shame in a United Kingdom where almost three-quarters of our land is farmed, one of the highest levels in Europe – and where too much is abused, and underused, although clearly, absolutely, not on the scale of Jair Bolsonaro’s assault on nature, and hence the planet, in that vast Brazilian rainforest.

Those UN scientists warned late last year that the worsening state of the world’s soils is at least ‘as important as the climate crisis and the destruction of the natural world above ground’. A lead author of the report, Professor Richard Bardgett of the University of Manchester, explained it powerfully and succinctly: ‘There is a vast biodiversity living in the soil out of sight and generally out of mind, but few things matter more to humans’.

My book, Land Renewed: Reworking the Countryside, emerged from a simple premise: that Britain, particularly England, is facing the most sweeping changes in land use, farming and, hence, the use of soil, in 74 years – and all below the political radar screen, with no public discourse or debate. That’s not good enough.

Why? Because the consequences from the gradual withdrawal from the EU’s subsidy-driven Common Agricultural Policy (CAP) – due to end finally in 2027/28 – and its replacement in England by a new environmental land management regime are profound. Known as ELMS, it’s driven by the Department of the Environment, Food and Rural Affairs (Defra) whose carbon-light agenda hardly aligns with other departments pursuing carbon-heavier policies (ie £25 billions road programme and car-dependent housing developments). On some estimates, a third of farmers, either unable to make a living from ELMS or deterred by the paperwork, might leave the land as a result. Upland farmers will be hard hit. Sheep will soon disappear from our hills.

Life outside the EU should have provided a heaven-sent opportunity to reshape the countryside without the CAP while, at the same time, addressing climate change and food security – areas inextricably linked because land, and the way it’s used and nurtured, is clearly the key to addressing the challenge of restoring nature and feeding the three nations of Britain. At present, self-sufficiency in the crops we’re capable of growing is woefully inadequate: we import almost 50 per cent of our food. Now, we can’t even harvest all our crops. Some have been left rotting in fields because EU nationals, understandably, are giving Britain the cold shoulder. The result: more imports from the EU, particularly from the vast glasshouses of the Netherlands and from ‘water-poor’ Spain, where arable land is ‘desertifying’.

Even when the food reaches our clogged ports, problems arise: already fragile just-in-time supply lines to supermarkets have become even more problematic with a shortage of HGV drivers. Privately, those in Whitehall charged with keeping us fed through secure supply lines are concerned. Taking back control? Forget it. The government recently extended a ‘grace period’ to July next year – and it’s likely to be longer, even endless – under which food from the EU will not be subjected to the physical checks, tariffs and additional paperwork already endured by hard-pressed UK food producers sending goods in the opposite direction to the EU. No level playing field for them.

Think about this: checks and border bureaucracy mean delays to food supplies – much of it perishable – and, hence, empty shelves. Forget the Prime Minister’s ‘Get Brexit done’ mantra. This should be urgently reworked to ‘Make Brexit work’.
Far from raising the current level of self-sufficiency above barely 60 per cent, the current food crisis – with producers destroying crops in fields and glasshouses because of labour shortages (and, hence, planning production cuts next year) – will, if anything, lead to falling domestic production and, hence, even more imports from the EU.

It need not be this way. There is some hope. Over the past year, in a tour of Britain, retracing old steps – inevitably, sometimes virtually – I’ve met countless small-scale food producers, smallholders, farmers and big agri-businesses, including those running the largest arable farms. They’re changing practices to embrace ‘nature-friendly’ and regenerative farming: restoring and creating hedgerows, planting countless trees – in a UK with probably the smallest tree-cover (10 per cent) in Europe, curbing and ending the use of damaging pesticides and fertilisers and reducing ploughing by drilling to plant crops to keep carbon in the ground and enrich soil.

At COP26 in Glasgow, Boris Johnson and his ministers made bold commitments to limiting global heating to 1.56⁰C from pre-industrial levels – but inaction globally will mean heading towards an increase well above 2⁰C. That will herald more extreme weather, rising sea levels and a displacement of populations on a scale never before seen.

So far, it’s far from clear whether these bold ministerial commitments from the UK are matched by the necessary radical plans for action. Getting Whitehall departments to coordinate policy, rather than working at cross-purposes would be a start. How, for instance, to square the Treasury’s vaunted £25 billion land-hungry, carbon-heavy road-building programme with the PM’s bold pledge to decarbonise – still less with Defra’s worthy environmental land management scheme, or ELMS. Not easy!

Peter Hetherington is past chair of the Town and Country Planning Association, and former regional affairs editor of The Guardian. 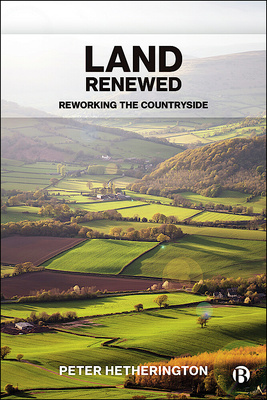 Land Renewed: Reworking the Countryside by Peter Hetherington is available on the Bristol University Press website. Order here for £15.99.