Irish Travellers under surveillance: The ongoing criminalisation of social policy

Search and rescue volunteer Seán Binder returned to Ireland in December 2021 to spend Christmas with his family. But Seán was actually on bail, awaiting a trial date in Greece. He was charged with human trafficking, relating to time he spent on the island of Lesbos giving humanitarian assistance to refugees as part of his work with Emergency Response Centre International. He and three other volunteers spent three months in prison in Greece, accused of helping ‘illegal migrants’ enter the country.

In January 2022, Limerick City and County Council were found by the Irish Data Protection Commission to have no valid or legal basis for the operation of 66 CCTV surveillance cameras in local authority estates, public areas and Traveller halting sites. This was happening at the same time as the reporting of a persistent underspend in local authorities’ Traveller accommodation budgets. This suggests that the surveillance of Travellers is accorded higher priority by Irish local authorities than meeting their basic need for shelter. Why is migrant assistance likely to be punished rather than rewarded and why are Irish Traveller families more likely to be subjected to surveillance than afforded decent living conditions? We believe that the criminalisation of social policy provides a useful analytic tool to answer this question.

For us, this concept of ‘the criminalisation of social policy’ puts a spotlight on the intensification of securitisation and criminalisation in policies chosen. The concept helps us to chart and analyse the development and proliferation of more finely grained strategies of exclusion and dividing practices across different policy sectors and geographical jurisdictions. These trends are evident in many country contexts including Ireland, the UK, the USA, Austria, Denmark, New Zealand and Australia, in projects of welfare reform, urban policy making, family interventions and rehabilitation strategies. We believe that the ‘criminalisation of social policy’ is broad enough to allow us to interrogate and challenge a confluence of strategies of government that create suspect populations, stigmatise, exclude and penalise poor people. These can be, although are not always, weaponised through legal criminalisation processes. For example, we query why custody is the setting chosen to provide care, treatment and support services that are not otherwise available to individuals and families in their own communities. The ‘criminalisation of social policy’ draws our critical attention to the steady creep of crime-control discourses and logics into civil law and policy. It puts under the microscope a variety of interagency crime–welfare intersections that allow for information sharing and tighter constellations of regulation in youth justice, family programming and so on.

Efforts to regulate and control the poor and those on the margins of our societies have been longstanding features of ‘welfare’: there have been overlaps and interconnections between welfare provision and criminal justice intervention from before, during and after the development of individual welfare states. For example, in the 1800s in Ireland, begging and homelessness were punishable offences; workhouses were dreary prison-like institutions designed with punishment rather than refuge in mind, for people who did prison-like labour for their keep. In a book published in 1990, Peter Squires usefully highlighted the significant anti-social aspects of social policy that characterised British welfare discourses and practices throughout the 19th and 20th centuries. Many other authors have interrogated the intersections between the penal and the social, between welfare and punishment in the 1990s and early 2000s, focusing our attention on New Labour’s Respect Agenda (2005–2007), the criminalisation of school discipline in the US and policy agendas reframing migration and homelessness as crimes rather than human needs. Therefore, our use of ‘the criminalisation of social policy’ highlights its significance for our times but does not imply or suggest that past societies had glorious welfare histories.

Yet, we perceive the renewed relevance of the concept post-2007 after the economic recession with the intensification of neoliberal governing rationalities, the stoking up of anti-welfare common sense in so many contexts and the deployment of increasingly punitive approaches across different social policy fields. Examples include welfare activation and conditionality, the reclassification of different behaviours as ‘anti-social’ and thus requiring punishment, as well as ethnonationalist welfare strategies. We are profoundly concerned by evidence from a number of country contexts that some so-called social policies are even exceeding and surpassing criminal justice policies in terms of their punitiveness and regulatory intent. Practices such as the targeting of social security beneficiaries with increasing levels of hostility and punishment are also deeply troubling.

For us, a singular focus on ‘the criminalisation’ rather than any other dimension of social policy illustrates how it assists in framing problems as individual, familial or community-based shortcomings and pathologies. Deeply entrenched structural dimensions, such as social class, ethnicity and gender get overlooked. Individuals’ attitudes, competencies and behaviours become the logical target for ‘evidence-informed’ policies and interventions. Despite variations in how the criminalisation of social policy is articulated in different political economies and welfare states, the overarching logics of neoliberalism enable similar policy approaches to take hold across geographical boundaries, and with the same groups of people being detrimentally impacted (i.e., migrants, ethnic minorities, non-nationals, single-parent families).

Serious engagement with ‘the criminalisation of social policy’ requires that we reject notions that crime and poverty can be solved by ‘fixing individuals’ through criminal justice and social policy interventions. It calls for better wealth and income redistribution, fair working conditions and comprehensive welfare provision for all – within and across borders of nation states. A reconstruction of social and public policy is needed, away from criminalisation and conditionality toward solidarity, social justice and fairness. And as we see it, the search for alternatives to our present inadequate arrangements is essential and it is urgent.

Elizabeth Kiely is Senior Lecturer in Social Policy in the School of Applied Social Studies at University College Cork, Ireland.

Katharina Swirak is Lecturer in the Department of Sociology and Criminology at University College Cork, Ireland. 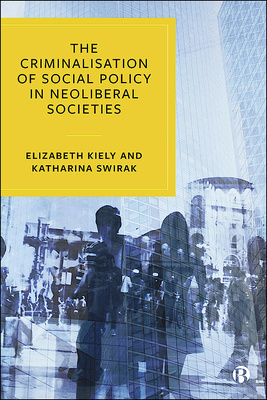 The criminalisation of social policy is explored in Kiely and Swirak’s book The Criminalisation of Social Policy in Neoliberal Societies. Order from the Bristol University Press website here.