Why every business needs to embrace the Global Goals

As businesses grapple with how they can help the world meet its COP26 targets, Ian Thomson and Dominic Bates – authors of Urgent Business – argue that the Sustainable Development Goals are still the best way to focus everyone’s efforts and make the most impact.

With so many companies these days choosing to adopt a purpose-led approach to business and incorporate sustainability into their business values, some might question why there’s a need to explicitly use the UN’s Sustainable Development Goals (or Global Goals). Surely if every business aims to create a more sustainable world, it doesn’t matter how it’s labelled? But it’s vital that companies have something to measure their purposes against, otherwise there’s a risk that firms will arrive at their own definitions of sustainability that may vary hugely in depth and scope.

For example, the UN’s Global Sustainability Index Institute (UNGSII) has been critical of Apple’s insistence on going its own way on sustainability reporting. It scored the company zero in its 2017 SDG Commitment Report for the number of mentions of the Global Goals or themes in its corporate annual accounts. Apple instead produces separate, annual environmental and supplier ‘Responsibility Reports’ with its own standards and targets.

While Apple has made impressive strides in some areas – its data centres are now 100 per cent powered by renewables, for instance – its self-selected focus means it omits or ignores many other areas of sustainability that the Global Goals could help to illuminate. It also leaves itself open to accusations of phony or inadequate self-policing. Certainly, Apple’s efforts to improve the repairability of its products and worker conditions in its supply chains have been undermined by its public lobbying to pull a ‘Right to Repair’ Bill in the US in 2019 and continued news reports of child labour and harsh treatment in its Chinese factories.

In the end, it’s too easy for companies under pressure to maintain profits – especially major corporates like Apple – to drift from their chosen sustainable values without committing to the framework of the Global Goals to guide and maintain the highest standards. As well as providing more transparency and credibility over what sustainability means to a company, the Global Goals can also make them more accountable if they’re legally declared in annual reports – unlike the separate reports favoured by Apple. Besides, as the Global Goals have become more embedded in society, businesses have lost their power to selectively define their sustainability or continue ignoring the planetary limits to their growth.

But another equally important reason for businesses to commit specifically to the Global Goals is the power of a shared goal that’s recognised and bought into by everyone. With an agreed framework and common vocabulary, businesses, non-governmental organisations (NGOs), governments and development agencies, which have long spoken about sustainability in different and often contrary ways, can now understand each other and work together on the Global Goals.

And while there is already a well-evidenced ‘positive multiplier effect’ for businesses that pursue a sustainability strategy, adding value to the business at the same time as wider society, this effect is compounded again if many businesses come together and collaborate on the same shared goals. By uniting, they can extend their individual agency and reach to bring about positive social change at a systemic level, much like sector-specific lobbying groups already do to influence politicians and laws in a far more self-serving fashion.

For instance, a united front from some major international clothing retailers and NGOs helped bolster the confidence of the Myanmar government to bring in a minimum wage of 3,600 kyats (about US$3) per day in 2015, in the face of strong opposition from Chinese and South Korean firms that threatened to close their factories if the change went ahead. The Global Goals of ‘decent work and economic growth’ and ‘no poverty’ were the aim here, but similar internationally coordinated business efforts on the goals of ‘clean water and sanitation’ and ‘gender equality’ have seen a remarkable positive multiplier effect on the Global Goals across the board, indirectly raising the floor for all sustainability issues. Gap’s Women + Water strategy, for example, not only attempts to reduce water consumption in its Indian garment factories, but also provides safe and reliable water for its predominantly female workforce, who would otherwise be contributing to the 200 million hours women and girls globally spend collecting water every day.

This is because so many of the issues represented by the Global Goals intersect. So by targeting one, there is often a fortuitous benefit for many others. They reveal the power of responsible business. Their impacts can ripple far through supply chains, influencing governments and transforming societies the world over. And while the terms of sustainability and what a sustainable world looks like will inevitably change beyond the Global Goals and 2030, the mindset of responsible business will always be essential to achieving it. As the former chair of the OECD Working Party on Responsible Business, Roel Nieuwenkamp, said in 2016: ‘Responsible business conduct goes beyond auditing and stresses the importance of a continuous process of due diligence, which in addition to identifying risks requires prevention and mitigation as well as addressing negative impacts where they do occur.’

That ‘continuous process of due diligence’ driven by a desire to make a better world for everyone is what distinguishes a truly responsible business, not just auditing or ticking boxes against sustainability targets – Global Goals or otherwise. Responsibility requires this proactive, almost scientific enquiry forever asking questions about the sustainability of the business and never accepting ‘don’t know’ as good enough. And with this new science of responsible business, we’re all venturing out of our zones of ignorance and encountering sustainability in unique and different ways. So firms need to become ‘citizen scientists’, observing the traits of other responsible businesses and testing the theories that research and books (like ours) provide against their own experiences, then feeding back evidence that can be shared with others.

Although pushing at the limits of what businesses can do in this way may feel daunting or frustrating, it can also empower them to liberate themselves from the profit-and-growth straitjacket, and reimagine their role in the world as allies in the planet’s recovery rather than congenitally helpless contributors to its downfall.

Ian Thomson is Professor of Accounting and Sustainability and Director of Lloyds Banking Group Centre for Responsible Business at the University of Birmingham. He is also Convenor of the Centre for Social and Environmental Accounting Research.

Dominic Bates is Content Writer and Publication Manager at Lloyds Banking Group Centre for Responsible Business, University of Birmingham. Previously he was a professional journalist and editor for two national charities, while also freelancing for The Guardian, FT and Independent. 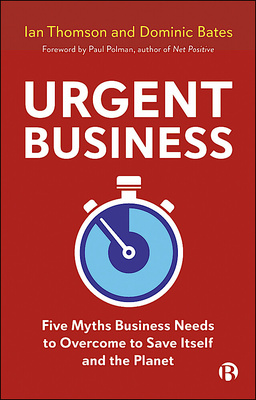 Urgent Business: Five Myths Business Needs to Overcome to Save Itself and the Planet by Ian Thomson and Dominic Bates is available on the Bristol University Press website.