The role of energy citizens in transforming the energy system

Matters of sovereignty, self-determination and freedom of expression are implicitly embedded in the goals of the energy transition. Until now, however, the path that society has been set on around energy use has created the possibility of a war. Bucha, Kramatorsk, Yahidne… these places echo in the midst of our witness of unbelievable horror. We must question a system that has enabled such tragedies to take place.

The folly of relying on Russia to support an economic system built on fossil fuel use is becoming painfully obvious. Four trillion dollars of oil and gas exports over the two decades of Vladimir Putin’s rule are funding the Russia-Ukraine war. Germany alone pays Russia €200 million per day for fossil fuels (compare this to the emergency €1.2 billion aid pledged from the EU). Coercion and abuse of power based on this dependency lends a new urgency to creating a new energy system weaned from supplies of oil, coal and natural gas held in the hands of authoritarian regimes.

As the EU has laid out its intention to become energy (gas) independent from Russia by 2030, a transformed energy system will need to be quickly realised. Banning imports of Russian coal and oil has already been proposed by the European Commission, but cutting ties from the gas supply still seems unlikely. However, this effort is not without its own risks. As is the case for fossil fuels, the resources of minerals and metals (such as copper, lithium, cobalt and nickel, for example) needed for low-carbon power generation and the electrification of industry and transport are concentrated in autocracies, where the top ten countries will have a market share of 75 per cent of all required minerals. The emerging ‘electrostates’ (such as Congo, Guinea and Mongolia) require increased mining activities amid fragile institutions and states. Rich-world governments therefore have a responsibility not only for replacing fossil fuel with renewable energy sources, but also for avoiding the recreation of dysfunctional dynamics of the resource curse and exploitive practices in a low-carbon energy system.

The role of the individual and communities is a vital one in the energy transition, while acknowledging that the energy decisions we make are constrained by energy systems that have been created beyond our control. Accepting that energy poverty and fuel access is a problem that many face, even in rich countries, the onus is on those groups of people who do have sufficient resources that guarantee warmth and comfort on an everyday basis to become ‘energy citizens’ – that is, people who actively contribute to the energy transition. This contribution has often been framed as what people can do to change their energy consumption patterns, and this of course is an important perspective to consider. For example, a recent Economist article reported that turning down the thermostat by one degree centigrade by the rich world, for example, would cut natural gas consumption by 10 billion cubic meters, roughly equivalent of one month’s worth of Russian imports. Lowering motorway speed limits by 10 km/h would reduce fuel use in rich countries by around 15 per cent. These ideas and others, including subsidies for public transportation, a ban on car use in cities one day a week and other measures focused on decreasing energy consumption could amount to 20 per cent of current Russian oil imports.

As has been shown through the polarisation of the climate change debates, the use of moral arguments to shame individuals into changing embedded and ingrained behaviours is not an effective way of uniting everyone behind a cause. Blaming can alienate and politicise those who simply do not like being told what to do in their private lives. Research has pointed to the perspective that decisions related to energy are not always explicit decisions made by individuals, but rather socially constructed norms and practices, embedded in the way that energy systems have evolved over time. An attack on individual behaviour, therefore, serves to enforce a perception of a lack of individual and collective efficacy towards transforming a complex system.

An alternative to this line of thinking is to see the role of citizens in the energy system going beyond that of a consumer. Broad-based political support is needed to change norms around energy choices. National security and supporting a nation’s self-determination has garnered backing across the political spectrum, more so than previous motivations for supporting the energy transition. This positive public engagement with the energy system may be the key to lasting change. Societal transformation comes not only with a change of technology and hardware, but also a change of norms, rules and behaviour. Much of our energy behaviour has been shaped by large-scale technical systems, where national transmission and distribution grids are governed top-down, distanced from where energy is consumed. Increased deployment of renewable energy technologies opens up an opportunity for smaller-scale generation, more local generation of energy and more public participation in the oversight of systems. The potential is for local participation in these processes and systems to lead to more effective responses to environmental problems, as well as better access and a fairer distribution of energy services and goods.

Achieving energy freedom depends on an energy transition that goes beyond rethinking technology and fuel sources, but also includes redefining the social roles and responsibilities of citizens. There has never been a better (or more urgent) time for new energy citizenship ideas. This energy citizenship concept is the subject of study and focus of the EU-funded Horizon 2020 project Energy Citizens for Inclusive Decarbonization (ENCLUDE), as well as four other sister projects that have been recently funded by the European Union. We hope to bring attention to the need to understand how individuals, collectives and systems perceive, act and change the energy system in Europe to underline the importance of justice and inclusivity. Indeed, these principles of justice and inclusivity have the potential to transform how we operate all our systems, not just those related to the energy transition.

BinBin J. Pearce is Assistant Professor for Policy Analysis and Design at the Delft University of Technology and Associate Editor for the new Global Social Challenges Journal. 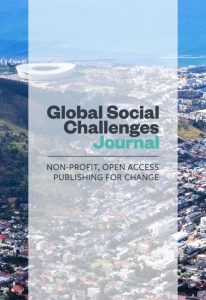 Find out more about the Global Social Challenges Journal here and sign up to our mailing list to be kept up to date on the latest news about the journal and join our community of readers and writers.