Building bridges, not barriers: Why we need a new UK Citizenship Test

Nobody told me the UK had a citizenship test. I found out when completing an application form for a permanent visa in 2009. After I picked up a copy of the test handbook, I was surprised more by how many British citizens, including several brilliant students of mine, did not know the correct answers to the test’s questions.

While errors of fact that were found in the original test handbook (mostly relating to British history which was not part of the test) were supposed to be fixed in the new edition that I had to study, the test handbook had become so outdated it was possible to take a test about the chapters relating to British society and politics where every one of the 24 questions asked had a correct answer that was factually untrue. Until I came on BBC Radio 4 to point these problems out, nobody had picked up how bad things had become.

And then it got worse. In 2013, the coalition government published the third edition of the test  which remains current. This version was intended to correct the problems that I had identified and to include questions about British history and culture that I had recommended. But instead of a fair test, we were given a bad pub quiz.

In my 2013 report, I exposed that the government had removed much of the practical information. New citizens were no longer required to know how to contact the police, report a crime or register with a GP. They did not need to know the telephone number ‘999’, but did need to know the front desk telephone numbers for the House of Commons, Scottish Parliament and Welsh Assembly. (Apparently, the government forgot to include the Northern Ireland Assembly at Stormont.) New citizens need not know how many MPs there are in the UK, but must know the number in devolved governments.

The problem isn’t merely the inconsistencies or the omissions – like the lack of mention of any women artists, musicians or poets – but the triviality of the facts required to become British. The government’s idea of having sufficient knowledge for citizenship is knowing the height of the London Eye in feet, the approximate age of Big Ben (in 2013) and knowing where the founder of the UK’s first curry house went to elope. And according to the test, the UK is still a member of the EU as well.

Such facts play no other role than providing an arbitrary barrier to citizenship.  Indeed, my research has shown the British citizenship test is the test few British citizens seem able to pass. While it is supposed to confirm sufficient knowledge to play an active role as a British citizen, this is completely undermined by the fact that much of the knowledge tested isn’t widely known by the public.

This matters. The test is required for anyone wanting permanent residency or citizenship. Over 2 million tests have been sat since the test launched nearly 20 years ago. Yet, the government has never run any public consultation on whether this essential requirement for something so important (and costs £50 per attempt).

In my book Reforming the UK’s Citizenship Test, I reveal the background about why a citizenship test was introduced, how it was put together, the problems with each edition and, most importantly, twenty recommendations about how we can make the test fairer, improve public confidence and serve as a bridge, not a barrier. It is the most comprehensive study of the UK’s test showing new problems, includes new interviews with key policymakers and develops a new alternative test to put right what has gone wrong.

Thom Brooks is Professor of Law and Government at Durham University. 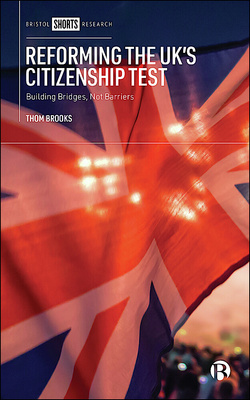 Reforming the UK’s Citizenship Test: Building Bridges, Not Barriers by Thom Brooks is available on the Bristol University Press website. Order here for £42.99.