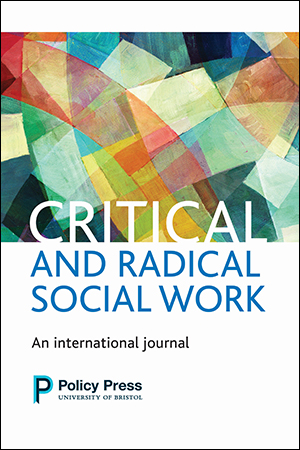 Iain Ferguson and Michael Lavalette introduce the new special issue of Critical and Radical Social Work, ‘Marx at 200’, in this editorial.

To see beyond the horizon is any manifesto’s ambition. However, to succeed as Marx and Engels did in accurately describing an era that would arrive a century and a half in the future, as well as to analyse the contradictions and choices that we face today, is truly astounding. In the late 1840s, capitalism was foundering, local, fragmented and timid. Yet, Marx and Engels took one long look at it and foresaw our globalised, financialised, iron-clad, all-singing, all-dancing capitalism. This was the creature that came into being after 1991, at the very same moment that the establishment was proclaiming the death of Marxism and the end of history.

Former Greek Finance Minister Yanis Varoufakis’s glowing tribute to Marx and Engels in his introduction to a new edition of The communist manifesto is only one of many that have been paid on the 200th anniversary of Marx’s birth. In this special issue of Critical and Radical Social Work (CRSW), we pay our own tribute to Marx in a series of commissioned papers that seek to highlight the relevance of his ideas today. (We suspect that CRSW may be the only professional social work journal that will celebrate the anniversary in this way but would be very happy to be proved wrong on that point!) In our view, no other thinker provides the conceptual tools that make possible a critical analysis not only of 21st-century capitalism, with its crises, wars, inequality and austerity, but also, and more narrowly, of the ways in which social work as a global profession has been transformed by the forces of marketisation, managerialism and consumerism that have characterised the neoliberal phase of capitalism.

This issue opens with an article by writer and activist Lindsey German on Marxism and women’s oppression. The year 2017 will be remembered not least as the year of the #MeToo movement, when women from across the globe spoke out against the sexual harassment, sexual abuse or rape that they had experienced, and challenged institutional sexism and misogyny. Such misogyny, it has become clear, pervades every major institution in society, including churches, political parties, the media and international non-governmental organisations (NGOs), and is starkly personified in the current President of the US, Donald J. Trump. In her article, German explores the roots of women’s oppression and its close links with capitalism and class, and argues that Marxist ideas can provide a basis both for making sense of that oppression and for challenging it.

Race and racism also feature prominently in current political debate and discussion. In previous issues of this journal, contributors have discussed the Black Lives Matters movement in the US and the involvement of social workers in that movement. However, the rise of racism is currently a huge issue in many countries, including the UK. Twenty five years after the murder of the black teenager Stephen Lawrence by racist thugs in South London and 22 years after a senior judge, Sir William McPherson, branded the Metropolitan police ‘institutionally racist’ for the way in which they investigated Stephen’s murder, a new scandal – the Windrush scandal – has exposed the extent to which racist ideas continue to inform UK government policy and practice.

The term refers to the ship MV Empire Windrush, which arrived at Tilbury Docks, Essex, on 22 June 1948 and brought workers from Jamaica, Trinidad and Tobago and other islands as a response to post-war labour shortages in the UK. The ship carried 492 passengers – many of them children. Despite living and working in the UK for decades, many of these people and their children have now been told that they are living here illegally because of a lack of official paperwork. The scandal has shown that institutional racism is alive and well and deeply entrenched at the heart of the Conservative government headed by Prime Minister Theresa May. Meanwhile, openly racist, and, in some cases, neo-Nazi, parties have representatives in several European parliaments. In the second article in this special issue, writer and activist Ken Olende examines the historical and contemporary roots of racism and draws on Marx’s writings to show its close connection with the rise and development of capitalism.

These two articles provide a strong theoretical underpinning for a social work practice that seeks to challenge racism and women’s oppression. However, as the next article by Paul Michael Garret shows, Marx’s ideas have much to offer in other areas of social work practice, too. These include the analysis of: the labour process and working lives in a capitalist society; neoliberalism and what Garrett calls ‘the voraciousness of capital’; and the role of the state and ideology. Citing Marx’s thesis that ‘the philosophers have only interpreted the world, the point is to change it’, he ends the article by suggesting ways in which a Marxist analysis can inform a radical practice.

Almost a decade and a half ago, the two editors of this journal wrote an article for the British Journal of Social Work, arguing that Marx’s concept of alienation provided a better way of understanding issues of power and powerlessness in social work practice than did the then fashionable approaches of post-structuralism and postmodernism. In this issue, we revisit that concept of alienation and the related concept of commodity fetishism. Our purpose in doing so is not to continue a debate with approaches that even then were not the dominant critical approaches in social work, and are even less so now. Rather, it is to argue that the lack of control over our lives and creative activity that, for Marx, defines alienation has actually intensified during the era of neoliberalism, not least since the global economic crisis of 2008 and the subsequent imposition of a politics of austerity. Through an examination of the areas of work, sexuality and health, we examine the terrible toll that that lack of control and greatly increased commodification is having on our health and relationships. Finally, we point to some ways in which an understanding of alienation can contribute to a radical social work theory and practice.

In few other countries have the ideas of Marx had such an impact on social work as they have had in Brazil since the period of the Reconceptualisation movement of the late 1960s, and in a challenging but fascinating paper, Elaine Behring explains the contribution of Marxist ideas to the development of the ethical-political project of Brazilian social work.

In the next section, in place of our usual Radical Pioneer section (given that the whole journal is already devoted to discussion of the ideas of one particularly eminent radical pioneer), we have three commentary pieces, each of which addresses a particular area of current debate or struggle. In the first of these, Dr Glyn Robbins, housing worker and campaigner, examines the writings on housing of Marx’s friend and collaborator, Frederick Engels, and shows their relevance to the current housing crisis in the UK and elsewhere. In the second piece, we return to Brazil for a discussion by three Brazilian social work colleagues of the concerning political developments there and their implications for social work. Finally, leading Scottish Jewish activist and academic Professor Henry Maitles assesses recent debates around anti-Semitism and anti-Zionism.

Read the special issue of Critical and Radical Social Work ‘Marx at 200’.