Why do we need revolutionary social work?

While many of us are aware of the threat to academic freedom posed by far-right governments, such as that of Hungary, which banned gender studies programmes in 2018, less is often known about other, less overt, attacks on critical scholarship and teaching.

In this blog post Masoud Kamali and Jessica Jönsson, guest-editors of a recent special issue of the Critical and Radical Social Work journal – ‘Revolutionary social work: promoting sustainable justice’ – explain why revolutionary changes need to take place in their discipline of social work to resist the dominance of neoliberal ideology and political parties in education and research. They provide an example from their own experience of how the rise of right-wing and racist political parties has stifled critical scholars, scholarship and teaching at a Swedish university and provide a list of practical suggestions for changes needed in social work, many of which are also applicable to other academic disciplines.

Universities as the sites of knowledge production have always been of concern for political and economic power centres. They have  had a double-edged and often contested role, generating critical thinking and fostering intellectual protest movements, which could call into question the most sacred truths of each historical epoch, on the one hand; and being a site of knowledge production for class and colonial oppression, on the other. As a result of an aggressive neoliberalisation policy in many countries since the 1980s, universities are no longer concerned with collegiality and the defence of science and democracy, but, rather, are entrepreneurial institutions (Slaughter and Leslie, 1997; Giroux, 2007) in which students are considered as consumers, universities as producers and academics as docile workers. It is against this backdrop and our personal experiences that the idea of editing the Special Issue of Critical and Radical Social Work was born. We believe that research, education and practices of social work as a profession of social justice should include revolutionary actions in order to resist global neoliberalism, neo-colonialism and racism. We realised soon that many colleagues and scholars of social work around the globe were eager to contribute to such a necessary issue.

Our experiences of the rise and fall of critical and radical social work education at Mid Sweden University and the way the neoliberal leadership of the university succeeded in excluding critical and radical researchers and educators from the department of social work, provide a significant illustration. Masoud Kamali has written a detailed account of his experience which was published in several instalments on the Racism Review blog. In these essays he recounts how in 2011 and after years of endeavours, and with the help of colleagues, he convinced Mid Sweden University to adopt a ‘Critical and Global Profile’ for their social work programme. Notwithstanding immediate and long-standing protests from conservative professors and educators it became one of the most popular education programmes in the country and its critical and radical research output received international attention. Applying critical, radical and postcolonial theories in addressing social injustices and structural inequalities, including decolonising field training and the focus on anti-austerity and antiracist politics and practices in a social work programme was unique in Sweden. The radical profile and its scientific leader Kamali came under continuous attack both from neoliberal and racist colleagues and political parties, such as the Moderates and the Sweden Democrats. Kamali was frequently reported to the university for ‘propagating communism, Marxism and Islamism’ and ‘radicalising youths’. This enmity towards Kamali was also connected to his role as the head of ‘The Governmental Inquiry into Power, Integration and Structural Discrimination’ (2004-2006) which had concluded that structural and institutional discrimination and racism is a major obstacle to the integration of migrants in Sweden.

Unfortunately, recent political developments, such as neoliberalisation, the retreat of the welfare state, and growing electoral support for the Sweden Democrats (SD) have provided cover for attacks on the critical profile of scholarship and the antiracist movement in Sweden. The political gains of the SD who won almost 18% of the seats in parliament in the 2018 election (up from 5.7% in 2010) reflect the rising influence of racist groups in Swedish society, including within universities.

In Kamali’s Racism Review blog post, he details how Mid Sweden University’s innovative social work programme eventually succumbed to the hostile political environment when several antiracist scholars (including both the authors of this blog post) decided to leave the University in protest against the increasing systemic racism at this institution and after a dispute which was discussed in the Swedish media.

The change in leadership of the university which forced out many antiracist scholars succeeded in adjusting the university to the “academic-industrial-military complex”, which in a post-9/11 world considers critical and non-Western individuals as a ‘danger within’, as Giroux (2007) argues in his work. The destiny of our critical and global social work education programme is by no means unique. The policies of ‘war on terror’ and securitisation seem to necessitate exclusions of critical and antiracist scholars from universities and favour the access of the white national affluent population to scholarly positions.

This can happen because many academics – whites and non-whites – keep silent about the neoliberalisation of universities and their institutional racism. As Hannah Arendt (1962: 464) put it: ‘Terror becomes total when it becomes independent of all opposition; it rules supreme when nobody any longer stands in its way.’

In order to counteract such a development, we present some key points and suggestions for action in our editorial to the special issue which are summarised here:

Revolutionary changes that should take place within the discipline of social work in order to resist neoliberalism, racism, neo-colonialism and imperialism, and to counteract the destructive role of the strong state that, in cooperation with global capitalist companies and military industries, is destroying our globe and human societies: 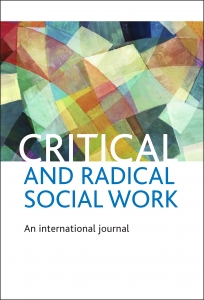 Please read our full call to action and the special issue of Critical and Radical Social Work for free until 30 April 2020.