How can we move forward in a society that continues to reinforce inequality based on skin colour? In the conclusion to White Privilege: The Myth of a Post-Racial Society, Kalwant Bhopal suggests ways to engage with a social justice and inclusive agenda for change in which the voices and lives of black and minority groups can be represented.

This extract from the conclusion focuses on how change can be implemented in the UK education system where white privilege should be addressed and challenged.

White Privilege is available with 50% discount until the end of June as part of our race and ethnicity reading list.

“How can we move forward in a society that continues to reinforce inequality based on skin colour?

The evidence of persistent inequality driven by white privilege suggests significant changes are needed in order to address and challenge racial inequalities. While racism may never be eradicated this does not mean we cannot actively challenge white groups who occupy positions of power and use white privilege as a means of protecting their position and their power. One setting where radical changes are both urgently needed and also possible is the UK education system. Schools, colleges and universities are required to demonstrate inclusion, meaning that social justice and equity are being taken seriously. These are public institutions that need to be held accountable for their practices; they need to demonstrate that they are implementing policies with concrete outcomes that improve inclusion for black and minority ethnic staff and students.

Our education systems must firstly acknowledge institutional racism and white privilege; a failure to acknowledge racism results in a failure to act upon it and to instigate change. There is a need for specific institutional frameworks that facilitate change at local and national levels. Schools and universities, for example, must demonstrate a clear monitoring of racist incidents; this includes identifying measures which outline how racism is addressed through clear action plans with specific outcomes. This information should be communicated to education departments in order that clear strategies are in place for how educational institutions are addressing racism. As discussed in Chapter Seven, there is evidence to suggest that when complaints of racism are made in schools and universities, these complaints are often dismissed either as bad behaviour or a clash of personalities. Complaining about racism often results in the victims becoming labelled as the villains.

Universities should take the bold step to introduce unconscious bias training as mandatory for all staff; at the very least this training should be a requirement for individuals involved in promotion and recruitment panels. A greater visibility of black and minority ethnic staff is needed in senior decision-making roles so that there is a specific recognition and valuing of diversity in staff representation, as well as a diverse curriculum for students. Universities should be held to account for their lack of representation of black and minority ethnic groups in these roles. Clearly institutions can identify lack of representation – they are already implementing regular and systematic analysis of staff profiles, from which a wealth of data (age, gender, ethnicity, under [and over] representation, staff levels and type of contract, promotion and progression) can be gathered – and yet they cannot rectify it. In order to support black and minority ethnic staff to reach their full potential, all universities should be expected to provide formal mentoring and training to staff who wish to progress in their careers; such mentoring and training should be designed to address the specific needs of BME staff.

As discussed previously in Chapter Six, I have suggested that despite advances in policy making in higher education, this has resulted in little change to the inclusion of black and minority ethnic groups in senior roles. For example, whilst the Race Equality Charter is a positive move in the right direction, it is far too early to tell if it will make a difference to universities addressing racial inequalities. However, if it was directly linked to funding, and capping student fee-increases based on successful completion of the Charter, it might encourage a greater number of universities to apply for the award and directly address issues of racial inequality. In order for universities to be awarded funding from the research councils, they should demonstrate how they are addressing issues of race, equality and inclusion. Furthermore, universities must think about how they are addressing diversity. It is not enough for universities to say that they are addressing diversity because they have a high number of international students.

Universities continue to fail to address the racial make-up of their student bodies. Oxbridge and Russell Group universities still fail to recruit sufficient numbers of black and minority ethnic students. During the final stages of writing this book, Oxford University was accused of ‘social apartheid’ because nearly one in three colleges failed to admit even one black student in 2015. Realistically, how can this be the case? Not one single black student was offered a place to study at Oxford in nearly one of three colleges in 2015? There is also evidence to suggest that Oxbridge recruits the richest in our society (83% of offers from Oxford and 81% of offers from Cambridge went to students from the top two socio-economic groups in 2015); this further disadvantages black and minority ethnic groups as BME groups are more likely to be living in poverty compared to other groups (see Chapter Nine). What does this tell us about our education system? Possibly that what ‘elite universities’ stand for is less about intellectual and academic value and more about privilege, wealth and power.

I suggest that the UK government develops a specific policy that addresses inequalities in the application process by introducing name-blind applications for universities. There is ample evidence to suggest that job applicants with non- Eurocentric names are disadvantaged in securing interviews, and this may also be the case when students apply for different universities. Introducing name-blind applications would address implicit bias in the university application process. This would ensure a level playing-field for all applicants; they would be judged on the quality of their applications rather than a form of implicit bias based on their names.

I have discussed in Chapter Six how advantage is awarded to those already advantaged. Children from independent schools are more likely to gain a place at Oxbridge or a Russell Group university, yet only 6% of children in the UK attend independent schools. White privilege is awarded to those who are already privileged; it reinforces and perpetuates a system in which white elites maintain and reinforce their position of power at all levels. From the earliest age, from the day a child first steps into a reception class, schooling, higher education and then the labour market reinforces the same patterns of inequality. If we believe that education is a right and not a privilege then every individual, regardless of their race, gender or socio-economic background, has a right to a quality education. Universities must be held accountable for their actions and for failing to admit a diverse body of students. I suggest a specific policy be introduced to address this inequality: a quota system for elite universities such as Oxbridge and those in the Russell Group. These universities must admit a percentage of students from black and minority ethnic backgrounds per year. They must develop outreach programmes that target poor areas and underperforming schools. Students from these schools and areas should then be given support to develop their university applications, as well as training for interviews. The most successful students should then be awarded bursaries and scholarships. This is not a lowering of standards; in fact an inclusive approach would raise standards at these institutions. The brightest students are not currently entering Oxbridge; rather these universities select the brightest students in small cohorts, defined largely by race and class. Outreach programmes have been in place in Ivy League universities in the US for some time; this is why in 2017, for the first time in its history, more than half of Harvard’s intake will not be white. A similar quota system should also be introduced for black and minority ethnic students wishing to pursue postgraduate research degrees (PhD). I have discussed in Chapter Six how black and minority ethnic groups are less likely to continue to study for postgraduate research degrees compared to white and international students, due to lack of access to financial and economic capital. Introducing a quota system and bursaries and scholarships for the brightest students would ensure that BME students access postgraduate research degrees based on their ability rather than their access to financial and economic capital.

In this book I have argued that race continues to remain a disadvantage for those from black and minority ethnic groups in all walks of life. By virtue of their non-white identity, BME groups continue to be positioned as outsiders and remain marginalised in all aspects of society. Policy making within a neoliberal context, despite its attempts to create a society based on inclusive practice, has not only failed but reinforced inequalities between BME groups and white members of society. These inequalities stem from racist and exclusionary practices that continue to perpetuate white privilege and white dominance. Consequently, the image of a post-racial society remains a myth. As Myers and Bhopal suggest, ‘To argue that post-Macpherson has resulted in a post-racial society is utterly absurd. Such discourses serve only to further disadvantage and marginalise black and minority ethnic communities. Racism exists at every level of society; it permeates our schools, our colleges and our universities. It is alive in all elements of society, our popular culture, our media, and the social spaces that we occupy’.

In this book, I have argued that within a neoliberal context, policy making is legitimised through a rhetoric that reinforces the benefits of neoliberalism as a universal value, whilst evidentially it is clear such policy reinforces whiteness and white privilege. Policy making fails to acknowledge the role that race and inequality play in perpetuating advantage over disadvantage. Neoliberalism does not benefit all members of society equally. We do not live in a post-racial society. Instead race remains central to the judgements and values made about who is deserving and who is undeserving: who belongs and who does not. Race acts as a marker of difference in a society poisoned by fear, insecurity and instability. Consequently, ‘others’ and ‘outsiders’ remain easy targets for those who ‘want their country back’ or want to ‘make America great again’. Whiteness and white privilege continues to dominate, with white groups doing everything within their overwhelming power to protect and perpetuate their own positions and status.” 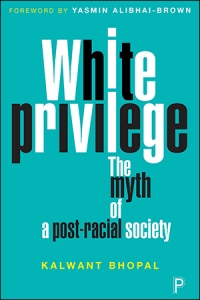 White Privilege: The Myth of a Post-Racial Society by Kalwant Bhopal is available on the Policy Press website. Order the book here for £11.19.