Mary O’Hara is an author and journalist who spent much of her childhood living in poverty and now specialises in social affairs. She writes a regular column for The Guardian, Lesson from America, is the author of Austerity Bites and the forthcoming The Shame Game, publishing in 2020.

Here, Mary talks about her childhood and how this led her to devise Project Twist-It, a multi-platform storytelling initiative. With the help of artists and writers inspired by the issue, it is a hub for telling stories that haven’t been told and hearing voices not usually heard.

Being a bit different

Early in my career when I was a rookie reporter, a good while before I began writing about poverty, a conversation took place that keeps coming back like a niggling alarm on snooze.

One afternoon in the newsroom, in the lull before reporters burst into action to file copy for the evening deadline, myself and some colleagues hit on the nostalgic topic of where we’d lived as children. In a matter of fact kind of way I recalled my first family home (before we were allocated a new council house when I was 7 year’s old) and watched, mortified, as a colleague’s jaw dropped as I described where I’d spent my early childhood.

Well, it was the 1970’s. For thousands of families like mine existing in poverty our everyday reality was sub-standard housing, rat infestations and a lack of basic amenities. And then there was the day-by-day gymnastics involved in stretching a household budget to its outer limits.

It wasn’t easy to reveal my upbringing to my colleagues. I worried that they would judge me. I had never wanted to be defined as a ‘token’, as someone ‘who made it out’. I’ve seen the profile stats on the backgrounds of people working in the media in Britain so I’m aware of being a rare thing: someone who grew up in poverty but went on to work at a reasonably high level in the industry. 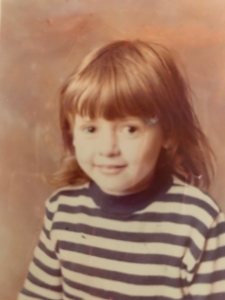 There were four small rooms in our cramped terraced house. On the ground floor there was a living room that struggled to hold a three-piece suite and, at the rear, a scullery with a plastic corrugated roof that masqueraded as a kitchen. There was no fridge or washing machine or any other related non-essential appliance. A fireplace in the living room provided the only heating other than a small electric fire when it was especially cold.

There was no bathroom in our house. Instead we had an outdoor toilet which, I’d told my colleagues, was frozen solid at times in winter. We washed each night in the kitchen sink and on Saturdays in a tin bath in front of the fire – two kids at a time – with water carried through in pots and a kettle from the scullery.

Upstairs there were two bedrooms. One was in the front for my parents with a cot for the newest arrival (I had five siblings by the time I was 7). My brothers and sisters and I (minus the latest arrival in the cot) slept toe to toe in a double bed that consumed almost the entire second room. A pot was under the bed for toilet needs during the night. The wallpaper fell from the walls due to damp and the window was 100% condensation.

There are millions of families who, right now – in Britain and America – are either homeless or living in shocking conditions, many not dissimilar to the kind of circumstances I grew up in and my colleague thought belonged to the 1930’s.

You can bet that, like me, many of the children in those struggling families are aware that for their society to tolerate this state of affairs means they might not be valued in the same way as other, better-off people. If they are anything like me, there will be an unconscious internalising of the message that it is your family’s fault if you are struggling. Something about you is ‘different’, is ‘other’.

Maybe it’s not entirely coherent. Maybe it’s just a feeling, a sense that something is not right or that the wider world has somehow placed a label on you that’s a bugger to break free from. Or maybe you’ve seen a newspaper headline that disparages families like yours.

For a lot of people experiencing poverty, including children, there is a profound discomfort about their perceived status in society. Frequently, living in poverty means being judged. Sometimes, it means being blamed for the tough circumstances you find yourself in, as if the whole world is handing out opportunities like candy and you’re just not reaching out and grabbing them.

No two experiences of poverty are the same, just as no two lives are the same. However there are shared characteristics, including the basic reality of whether or not you have a home or, if you do, what that home is like.

What it truly feels like to be in poverty – and certainly for children and young people – isn’t easy to articulate. Neither is what it feels like to be talked about and seen as different from others or, to be looked down on because your family has fallen on hard times. This is one of the reasons that Project Twist-It will feature the voices and stories of young people as much as possible.

Any meaningful alteration over the coming years to a poverty narrative that has prevailed for decades –  namely that it’s the fault of the individual and not broader structural factors – will most likely come from young people refusing to accept the economic and political orthodoxy that facilitates it. For now though, it’s up to all of us to do what we can to shift perceptions.

Writing this, I am reminded of this by Seamus Heaney:

History says, don’t hope
On this side of the grave.
But then, once in a lifetime
The longed-for tidal wave
Of justice can rise up,
And hope and history rhyme