Billie JD Porter, a writer, filmmaker and broadcast journalist, features in Mary O’Hara’s new book, The Shame Game: Overturning the Toxic Poverty Narrative which is out now. This interview was originally published on Project Twist-It, which the book draws from.

“Why is Project Twist-It a crucial initiative? Because too often, poverty is a subject that people shy away from talking about, or even thinking about. It’s a word that means different things to different people, which is exactly why we need to be hearing from a number of different voices on the issue.

There’s such an overwhelming sense of guilt and shame when it comes to financial struggle. I was conflicted about how open to be in this post, because part of me almost feels disloyal by speaking about the difficulties my parents have faced over the years. Its not nice to think about the period not long ago when my father was begging on the street, or that my mum has to do a part time cleaning job while having a lung disease and nearing retirement age.

I’m certainly not embarrassed; my decision to be private about this stuff, even to some of my close friends, has been nothing to do with vanity or pride, but more how twisted the public perception is of people who find themselves in similar, or worse, positions to those my parents have been in.

Our society is conditioned to believe that money is a reflection of hard work, and, conversely, that a lack of it is a sign of laziness.

My mum and dad are both charming, intelligent and talented people, but I grew up in an environment where depression and addiction rendered them unable to work for much of my life.

The ‘benefits scrounger’ narrative doesn’t attempt to understand illnesses such as these. Honestly, I could probably have solved some of their financial issues if I had a pound for every time I winced through the question, ‘if your parents are poor, why don’t they just get a job?’ as a teenager.

‘Poor’ was the label we were all desperate to avoid at my school, even though most of us came from low-income families, or households with unemployment. I was perpetually anxious about being judged for things that seem so trivial now; using own brand supermarket goods in food tech class, or being on the free school meals program. I made it worse for my parents by asking for money so I could eat outside school grounds with my friends, but then had a daily panic when I still couldn’t afford to buy lunch where they did. Obviously none of us were earning at the time, but money seemed so important; I’m pretty sure my peers would have preferred to have a reputation for being mean or unintelligent, than being ‘poor’.

Today growing up there’s far more to contend with. Never has there been a culture so saturated with materialistic ideals, exaggerated to the point of utter fantasy through the smoke and mirrors of social media.

“It makes me so depressed”, a fourteen year old girl told me, when I asked a group of young carers how they feel when they see people flaunting their wealth online. As part of Project Twist-It, we were discussing the perception of poverty amongst young people, and the difficulties that come with being a teenager today in a family where money is tight. The group was unanimous: seeing endless images of what others have, can be a glaring and upsetting reminder of what you do not have.

It made me think of this Charlie Brooker sketch. Today, over ten years after it first aired, it takes on a whole new context: the ‘aspirational lifestyle’ isn’t just a marketing tool used by corporations to sell us things, its now an idea we use to lord ourselves over one another.

I, like many others my age, am 100% a guilty part of this trend. Maybe its no coincidence, that as inequality widens in rich countries like the UK and America, we’ve taken to creating, and consuming, gratuitous and often disingenuous candy-coated versions of the world online. Is it escapism?

I guess nobody wants to actually see, or be reminded about, the potential of financial trouble, the same way people going through it don’t want to broadcast it. I didn’t consider posting a selfie as I tearfully applied for a crisis loan at the job centre after being fired with no severance pay, several years ago. In fact, when the loan didn’t cover my expenses, I felt so awkward about having lost my job, that instead of asking for help from my friends or relatives, I just started pawning my jewellery.

The social stigma that’s attached to asking for money can make what starts as a bad situation unravel into a desperate one in a matter of hours.

I’m very lucky. My extended family have stepped in on occasion to help both my parents and me in times of need, and I no longer feel like money (or lack of it) is the elephant in the room. But growing up, I didn’t feel I could talk about visits from bailiffs, or the times we ran out of money for gas and electric.

Millions of young people across the UK and America are living in poverty, and Project Twist-It seeks to normalise the opportunity for them to share those experiences, and for people in general to feel less embarrassed to discuss their relationship with money. Conversations about financial inequality in our society can be uncomfortable. Maybe they need to be at first.

Poverty isn’t simple. It never has been. Poverty is intersectional. It’s easier for certain groups to lift themselves out of poverty than others.  Poverty isn’t necessarily to do with ‘class’. Poverty can be short-term, long-term, and about more than just the money in your bank account.

The issue isn’t going away anywhere fast; its time to confront it head on.”

Watch this 15 minute film, featuring Billie JD Porter, that focuses on young people from across the UK as they share stories and insight on poverty, highlighting their ideas on how we can all change this narrative. 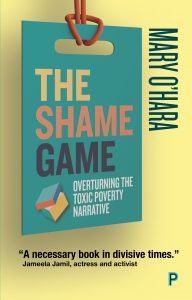