Segregated play spaces: an unpleasant symptom of a much bigger problem

Occasionally a story is reported in the news that provokes a public response, stimulating discussion, particularly on social media, and prompting other similar follow up news stories. One such story emerged recently when it was reported in The Guardian that a housing developer in South London (Henley Homes) had developed segregated play areas at its Baylis Old School complex in South London. Play areas frequented by the children whose families lived in the private housing in the development were inaccessible to those children who lived in social housing within the same development.

The initial story prompted statements of outrage from key political figures, including Jeremy Corbin and the Mayor of London Sadiq Khan. The story was short-lived as the housing developer quickly bowed to public opinion (which was overwhelmingly, although not exclusively, critical) and promised to rectify the problem. A seemingly happy and fair ending to a story of momentary interest to a few, but which in reality was a symptom of a much larger, more disturbing problem.

The UK, much like the US, is a society that is characterised by extremes of poverty and wealth inequality. The UN Rapporteur on extreme poverty and human rights visited the UK in November 2018. It was a visit that puzzled many people. Poverty has become such a misunderstood and outmoded term of reference in the UK (despite the fact that poverty is widespread and becoming more so) that few deem it to be a real social issue. The Rapporteur’s initial report was damning, highlighting the cruelty of policies directed towards those with the least, who are increasingly being left destitute amidst cuts to out of work benefits and the over zealous deployment of out of work benefit sanctions. As the initial report from the Rapporteur shows these economic inequalities and injustices and the limits to life chances that flow from them are not happenchance, they are the consequence of deliberate policy choices that work to increase inequality and diminish the quality of life for those with the least.

Out of work benefit claimants have fared particularly badly over the last decade or so with many facing a perfect storm of changes that have resulted in loss of income and rent areas and at a time when many were already struggling to make ends meet. In my book Poverty Propaganda, I use the example of the documentary Poor Kids that was broadcast in 2011 and which gave a close-up account of living in poverty from the perspective of the children involved in the programme. The documentary was very powerful and evoked much sympathy for the children, prompting some people to write in the BBC to see what they could do to help the children. Yet, what is interesting is that such sympathy rarely extends to the parents of those very children. The idea that those on out of work benefits, experiencing poverty or other related disadvantages are unworthy of support or sympathy and are culpable for their own problems goes back a long way. To subscribe to such a view can be reassuring, even for those who are experiencing the very same or very similar problems, as distancing oneself from those who are deemed to be undeserving helps protect people from the ingrained stigma and shame so closely tied to disadvantage in Britain.

This distancing is supported by a ready supply of what I describe in the book as ‘poverty propaganda’. The so-called ‘undeserving poor’ have long been the scapegoats of every societal social ill from poverty to crime and anti-social behaviour and pretty much every social problem in between. These deliberately orchestrated narratives that demonise those experiencing poverty do a lot of important work to hide the real causes of poverty and other societal problems. They lay the blame very much at the door of those who experience these difficulties, thus deflecting attention away from the real causes of poverty.

Housing is just one more, increasingly visible, face of class inequality, particularly in cities like London where the affluent increasingly have the monopoly over housing, including housing that was once the preserve of the working class. The working class are now all too frequently ousted from their homes and communities, even in some cases to new cities. Developers scoop up social housing once occupied by ordinary working class Londoners, refashioning it to appeal to the very rich, and all the while making a very tidy profit for themselves and further entrenching class segregation.

I have written elsewhere about how much of the public discussion that ensued after the Grenfell Tower fire revealed that many still held deeply ingrained prejudices and stereotypical views of both social housing and the much maligned tower block.  Poverty propaganda helps to position those experiencing poverty and related disadvantages as ‘the other’ and this ‘us’ and ‘them’ rhetoric then obscures the reality of what really causes poverty in counties like ours. Such misrepresentation allows governments to enact policies that further penalise those who find themselves out of work or who are facing other disadvantages, worsening their plight and making escape less likely.

Rather than being outraged, the general public remain largely convinced that punitive policy responses are needed to address the irresponsibility of those who are deemed to be ‘undeserving’.  Levelling the literal playing field (or children’s play area) may be a very small step in the right direction and worthy a step of course, but treating the symptoms won’t solve the problem. The problem here goes to the very heart of our political, social and economic system and unfortunately it is a problem that it will take a lot more effort and resolve to address. 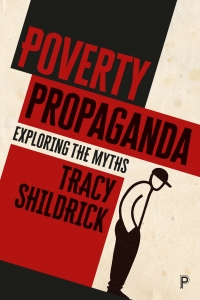